Max Holloway’s manager has revealed four possible opponents for UFC 218! Guess who the last one is. 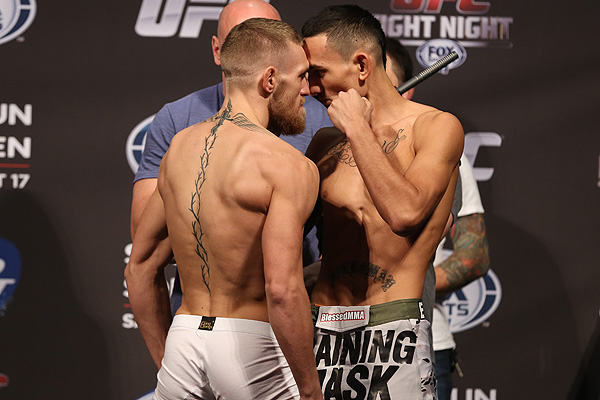 The original plan for UFC 218 main event was Max Holloway vs Frankie Edgar for the UFC Featherweight Championship but this is now scratched off as Edgar had to pull out due to facial injuries that would require surgery. Now that the main event is in jeopardy, Max Holloway has promised to save the event.

Jose Aldo had expressed on Twitter that he would love to get his hands on ‘Blessed’ one and avenge his previous loss to him. However, Aldo is scheduled to face Ricardo Lamas on December 16 at UFC on Fox: Lawler vs dos Anjos. Aldo was the former kingpin of the featherweight division as is regarded as a living legend by many. He definitely deserves a rematch as he has been ruling the division for a very long time. Since UFC 218 is before UFC on Fox, Aldo can be scheduled to fight Holloway instead.

Hey @BlessedMMA,I want my title back. I deserve the rematch. Let’s make this happen @ufc

Tony Ferguson is the current Interim UFC Lightweight Champion and is waiting for Conor McGregor to show up once again inside the Octagon. Moreover, there has been a rumor that the two may clash at UFC 219. But if this fight is post-poned, then a ‘Champion vs Champion’ fight between ‘El Cucuy’ and Holloway seems to be a blockbuster fight for UFC 218.  This would also be a safe option for both the fighters if neither title is on the line. Moreover it would be easy for the UFC to sell a ‘Champion vs Champion’ fight which would only mean more money to the organization and the fighters.

Brain Ortega is an undefeated fighter in the UFC who has finished all of his opponents inside the Octagon and in doing so has installed a new fear in the hearts of the fellow featherweights.

Cub Swanson is on a four fight win streak and is already 34 years old. He has never fought for the UFC strap and now may be the perfect time for him to pursue this opportunity that has appeared due to the absence of Edgar.

Conor McGregor has fought Holloway in the past and has defeated him successfully by going to the distance. McGregor being the former featherweight champion, who was forced to vacate the belt after he won the lightweight championship, wouldn’t mind creating history for the second time. It has been rumored that McGregor will return to the Octagon by the end of 2017 but it is not clear who he will be fighting. It is believed that he is scheduled to fight Tony Ferguson at UFC 219 but we never know what McGregor is up to. He may also want to fight at UFC 218 against Holloway for the featherweight belt and then fight Ferguson for the lightweight championship at UFC 219.

Holloway would have no problem avenging his previous loss to ‘The Notorious’ one and make some cash. Only time will tell who the champ will trade punches with.