UFC 264: Conor McGregor warns Dustin Poirier that he will be ‘dead’ inside the Octagon 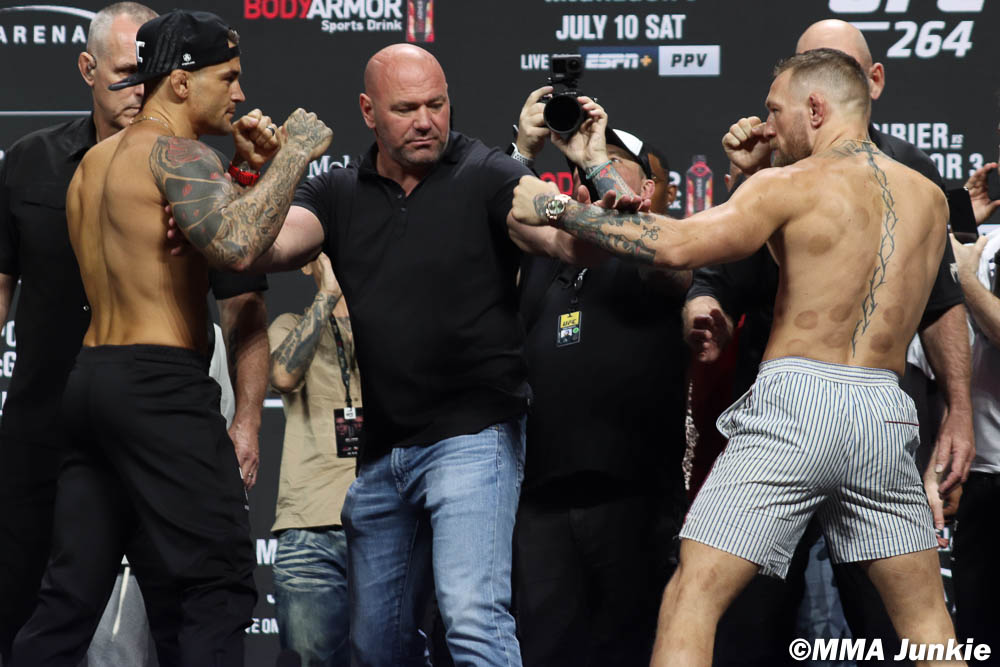 From a more humble avatar before their second encounter earlier this year, Conor McGregor has now taken a more violent, trash-talking approach as his much anticipated UFC 264 fight against Dustin Poirier makes its approach.

With both having secured one win over the other in the past, it’s pretty evident by McGregor’s modus operandi that the Irishman is trying to get 2-1 up on his nascent mixed martial arts rival.

McGregor calls out Poirier for disrespecting his kindness

The pre fight press conference on Thursday saw McGregor back into his badmouth persona, as he heated up his trilogy fight against ‘The Diamond’ by his on stage antics, from stealing Poirier’s hot sauce to calling him a ‘b****’ and even ending the press conference with a leg kick.

Now, on the special occasion of the ceremonial weigh-in ahead of Poirier vs McGregor 3, ‘Mystic Mac’ has taken another shot at his American adversary after the weigh-ins, has sent a violent warning.

“Joe, in 16 hours’ time, this man is going to learn that if you disrespect a person’s kindness and take it as a weakness, you must pay,” McGregor said to Joe Rogan after the weigh-in.

“Tomorrow night, I’m going to make this man pay with his life and I mean it. You’re dead in that Octagon tomorrow night,” the 32-year-old added.

McGregor and Poirier have clashed against one another twice in the past, with both of them securing a victory over the other. Their first encounter at UFC 178 saw McGregor picking up a win by TKO, and Poirier repeated the same result at UFC 257 back in January this year.

However, the former UFC double champ believes his January loss to Poirier was a ‘fluke’ and speaking to The Mac Life ‘Mystic Mac’ once again did his prediction- a brutal KO that will send Poirier into the hospital on a stretcher.

“I don’t give a f**k about him, to be honest,” said McGregor, “It’s just how I am, he’s a corpse, a dead body a blank face that’s going to get his ass whooped and took out on a stretcher.”

Who do you things wins UFC 264? Let us know in the comments.