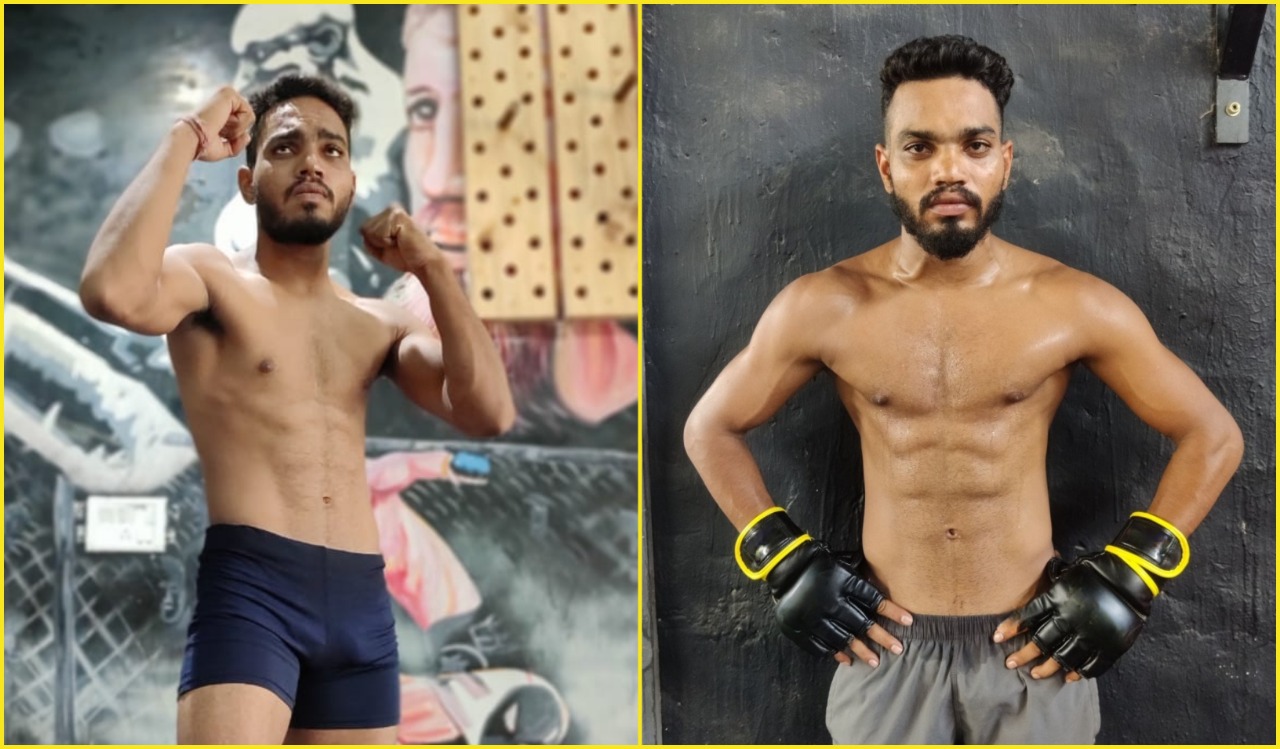 Many few people in the world get a chance to live their dreams. The dreams are often hard when you want to be an accomplished MMA fighter. One such fighter living his dream is Gajender Rawat.

Gajender Rawat will be making his pro debut at the Matrix Fight Night 7 event taking place at the Taj Falaknuma Palace in Hyderabad on December 10. He will take on Nongmaitham Bon Jovi who has a 3-1 professional Mixed Martial Arts record.

Gajender Rawat has had a stellar amateur career with under sixteen fights under his belt. So he has been putting in the work to be able to make his pro debut in the biggest Mixed Martial Arts organisation in India. Hailing from Madhya Pradesh, the 24-year is currently based in Chandigarh, where is training under Gurkaran Singh, who is the head coach at the Indian Top Team.

The MMA India Show team had the opportunity to talk with Gajender Rawat ahead of his pro debut.

I am very excited for my pro debut and I am going to show the world, why they call me ‘Sniper’.

2.) When did you start training for MMA?

I started my MMA training in 2018. Although I did Karate when I was a kid, but it didn’t last long as I only went there to learn some self defense. However, I was very fond of Cricket and I was a fast bowler and trained at Karnataka Institute of Cricket(KIOC). But I suffered a back injury and was struggling for quite some time. Then, One day while I was lying on my bed, I saw a video of Conor McGregor on youtube, which immediately sparked my interest in Mixed Martial Arts.

Following this, I started training by myself and bought a heavy bag and started working out. I then fought in Mumbai at an amateur event. I suffered a brutal loss, but I didn’t lose hope and kept training by myself to become better as I didn’t have any coach. In September of 2018, I went to an AIMMA event in Delhi for a fight and in the same event, one of my teammates was brutally knocked out. I was traumatised by that experience and I started doubting myself thinking about stuff like I am not built for fighting.

Then I came to Chandigarh to train under Coach Gurkaran Singh. He was an experienced coach having trained in Australia. My technique started getting better with each passing day and I already possessed a knockout power, so that also helped me with my confidence.

3.) What did your parents say when you were transitioning to MMA after playing Cricket?

Yeah there were some issues and I was already a fast-bowler training in Bangalore and my parents had spent a lot of money there. My parents encouraged me to get into business as opposed to getting punched in the face. However, they came around later and have supported me ever since.

As an MMA fighter, I want to improve my striking as I am more interested in finishing my opponents, but as far as grappling is concerned, I have improved very much in that field as I have defeated fighters via RNC and other types of submission. Overall I am a better fighter everywhere.

5.) How has training been under Coach Gurkaran?

it has been a great training experience training under him by the way he has guided me as a coach and a friend. Whenever I am having any basic problem or going through something mentally, he is always there to advise me and all his advise have yielded only positive results.

Before I came to Chandigarh, I had a lot of holes in my game, and my striking was good enough. But after spending time at the gym, I am vastly a more improved fighter than I was before.

6.) What do you know about your opponent?

7.) What do you do apart from being an MMA fighter?

I am an intraday trader and I have taken a break because of the rigorous nature of my MMA training. A big plus point with trading is that my calmness has increased and it has directly helped me in my MMA career. In the stock market, people lose a lot of money while trading and the traders are usually very nervous. However, I am a very patient trader which is why I am very calm and that’s why even when I am inside the cage, I am not nervous.

YOU CAN WATCH GAJENDER’S PRO DEBUT ON DECEMBER 10 HERE.