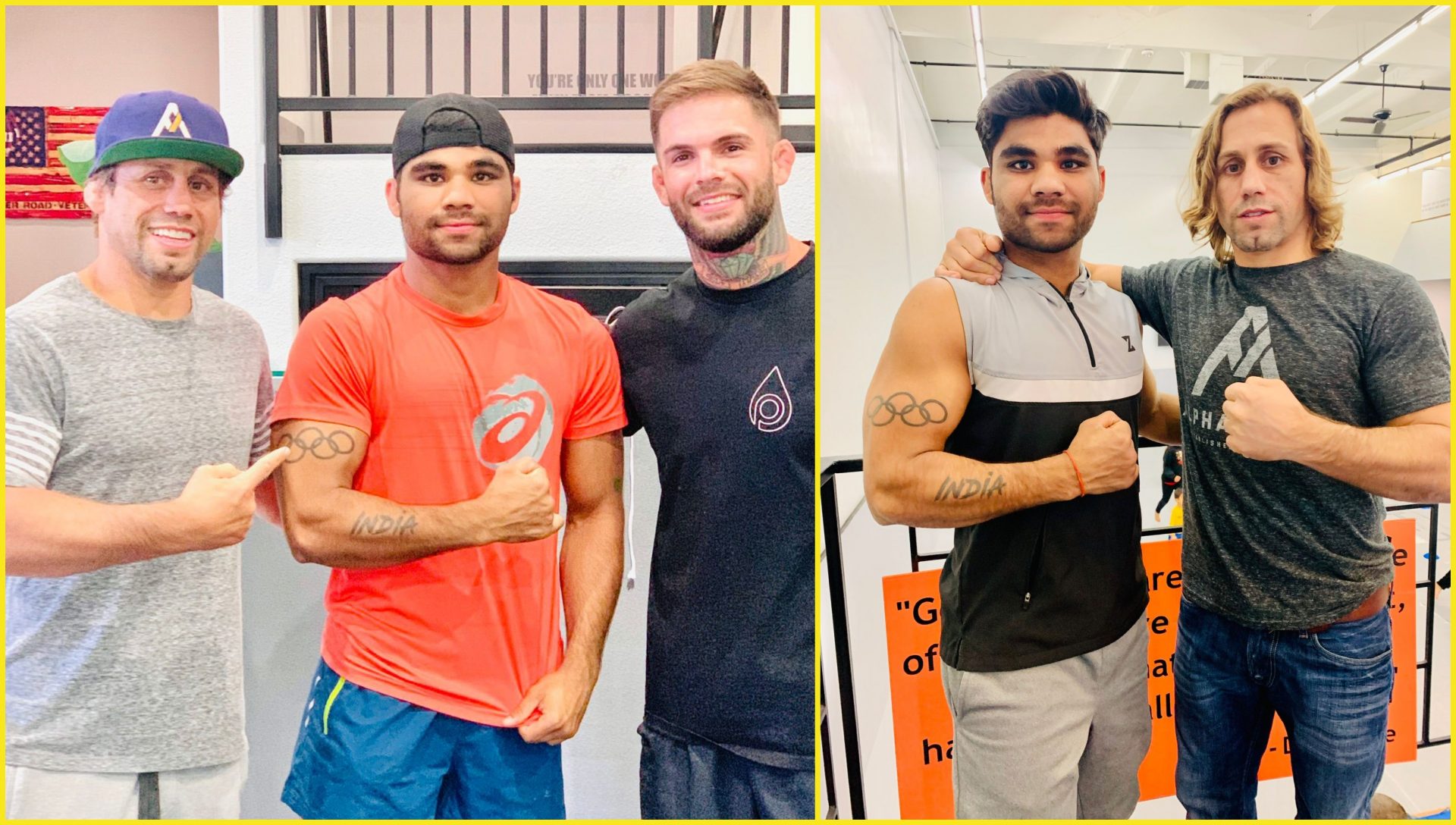 MMA (Mixed Martial Arts) is one of the fastest-growing sport in the world and it has already amassed a huge fan following in India. Numerous MMA fighters from India are fighting in some of the biggest organisations in the world.

One such name is Sumit Kumar, who is just 21-year old and has an undefeated record (4-0). He hails from Uttar Pradesh and is currently training at Team Alpha Male in Sacramento under the greats like Urijah Faber and Cody Garbrandt. 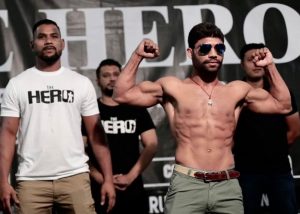 The MMA India Show had the opportunity to chat with Sumit Kumar and talk about his upcoming plans.

1.) How did you get into MMA? How has been your MMA journey so far?

I am from Mathura, Uttar Pradesh. I started my career as a wrestler. I wrestled from the early stages of my life, I use to practice in many of the local wrestling gyms in Delhi. After that, I went into the army. I trained in the army for two years then I participated in the 11th World Martial Arts Games which took place in the US. I won the Gold medal in that competition and I was training under Team Alpha Male. There’s a federation that sent me to this competition and fought in the tournament while representing India.

2.) How did you get in contact with Team Alpha Male?

For preparing for the tournament I trained under Team Alpha Male. After I won, I got a 10-year visa. I came back to India with my team but my dream was to train with some world champion wrestler, so I went back to train there. I wanted to train there with Jordan Burroughs but he wasn’t available to train that easy but some coaches took me under them. I worked at a restaurant and stayed there. I used to work during the day and then train whenever possible. 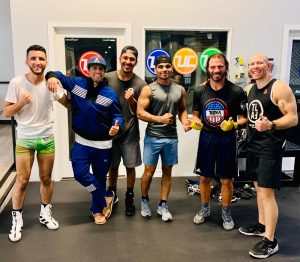 Then I found the coach Kevin Jackson who’s a two-time Olympic wrestling champion. He saw my wrestling skills and called me to train with him at the Olympic training center in the US. That’s where I finally got the chance to train with Jordon too. After that, I saw an amateur MMA event and my coach told me that India is such a huge country and such talented hard-working athletes yet no one wants to make it in MMA. So he gave me the contact of Uriah Faber who’s the head coach of Team Alpha Male and told me that I should now start training in MMA as he felt I had the skill to do so.

Then I met Faber and showed him my wrestling skills and he then trained me for free. Then I started working in a store at the night and use to train all day. I’ll also tell you one thing that UFC President Dana White is following me on Instagram even he feels like I’m the hope for India. Many UFC fighters also follow me on Instagram, it’s a big thing for me as they have also kept an eye on me and want me to get in the UFC.

3.) How was the transition from Wrestling to MMA?

Yeah, I faced a lot of difficulties in the beginning as I have trained in wrestling all my life and suddenly to come into MMA, it took a lot of time and effort. Boxing was very difficult in the beginning and then meeting and training with all the fighters is different in beginning. The most important was to survive in America.

4.) Team Alpha Male has a lot’s renowned MMA fighters who compete in UFC. Have you sparred with anyone of them?

I have even sparred with Uriah Faber. I have also sparred with Song Yadong the guy who defeated Bharat Khandare in his debut. I have given my best in wrestling at Alpha Male.

Yes, I’m 4-0 in Pro MMA. I have fought all those pro fights in India and competed for ar amateurs in the US.

6.) Have you planned to compete in the USA?

7.) Since you have trained at such a high level. Do you think you can give India its first MMA champion?

Yes. Definitely, I’ll be the one. I’m very dedicated and that’s the only reason why I left m my wrestling and started training in MMA. Recently when I saw Brendon Moreno win the Flyweight championship and become the first-ever Mexican champ, I become more focused and now I wanna do the same for India. I even told Dana White that I wanna get in UFC and he replied saying see you soon. That’s a big thing for me. So you can surely count on me and I’ll soon be in the UFC I just need to build my record and add few more wins.”

8.) Now since you have been in the US for so many years training in MMA, what’s your family reaction to this?

Actually, my family still doesn’t support me on this. They keep saying I always come home broken as fighters get injured all the time. They wanted me to continue the job in the US and not pursue fighting. They are still not happy with me continuing in MMA as they say I don’t earn enough money through this. Basically, it’s because there aren’t many fighters in India who have made it to the big stage. 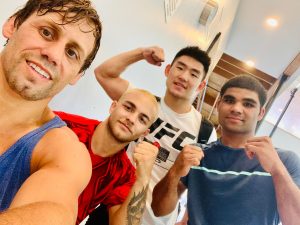 Once I get to the UFC, my parents will know about how big the scene is that’s why I don’t argue with them on this topic and just continue training. And feel like I will make it soon as lots of fighters support me and want me to make it into UFC. The day Dana White sir followed me I literally felt like I’m already in the UFC. There are lots of blessings behind me soo I feel like I’ll be there soon. I feel like Uriah Faber sir must have talked about me to Dana White.

9.) What do the training partners in the Indian army have to say about you now?

In the beginning, they weren’t that happy about me leaving the Army as they felt I might have messed up my life by leaving the army. But now all those guys tell me that they are happy to see me now doing good in life.

I am now just waiting for proper opportunities. I even had a chance to fight at ONE FC but they already got lots of Indian fighters and I  don’t want to fight there I want to fight in the UFC. I’m just trying to get few more wins then I can try for UFC. I’m in constant touch with LFA and they have offered me to fight in their next event but due to travel restriction in Brazil I’m having few issues but it will all be sorted soon.

11.) How is your training in India going?

Now I have been in India for the past four months. The training is nothing compared to what I use to train at Alpha Male. There I use to train 3-4 times a day here I’m not getting proper training till I’m trying to do my best as I can.

My inspiration is Uriah Faber. He has been a great mentor for me. The way he trains still now at this age of his life inspires me a lot. even though he doesn’t fight a lot these days he still would hard every day. This is my inspiration. All those guys at Team Alpha Male support me a lot. Help me a lot. They all wish me luck and do their best for me to get in the UFC. This support means everything to me. Now I’m just waiting for the restriction to lose a bit so that I can go back and continue my journey ahead. 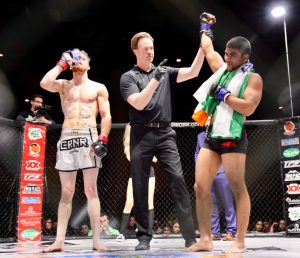 All now I want is to get some fights in the major league because the UFC guys would only get me in if I have won in some major leagues over some notable guys. So that’s my plan ahead to fight at renowned promotion get few wins and get in the UFC. I think  LFA is perfect for me. LFA wants me to come there and compete as soon as possible. I’m just waiting to get out of here and get back in the ring.