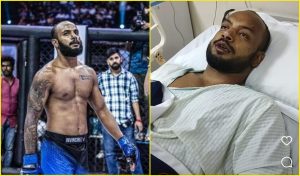 Srikant was also fought in the fight card against Sumeet Khade at MFN 9. Srikant Sekhar scored a D’Arce choke submission in Round 1. Following the submission win, he called out Zahoor Shah who had earlier defeated him at MFN 9 and was also fighting Seth Rosario. There was a lot of controversy surrounding that fight as well, but the whole clarification has been given.

However, things took a turn for the worse after the super fight, when Abdul Badakshi sucker-punched Srikant Sekhar and the Afghan fans stormed cage-side where ‘Captain Crazy’ was present and attacked him along with MFN and the officials from the sanctioning body.

MFN Owner took to social media to post an official clarification regarding the whole incident and confirmed that no Afghan MMA fighter will ever fight on a Matrix Fight Night card.

“I would like to sincerely thank the entire Indian MMA
community for the incredible show of support for MFN.
We had one of the greatest shows so far and the
disturbing incident that took place at the end cannot
and should not take away from the fantastic show our
fighters put on. To all our winners my sincere
congratulations, and especially to those fighters who
made spectacular debuts! To our MFN veterans, you guys
showed why you are MMA stars in our country! I would
like to thank all the AIMMAA and GAMMAF officials,
judges and referees for your world class handling of the
event, as well as for your fearless handling of the mob
that broke all boundaries of sportsmanship.

“To my wonderful MFN team, I have no words to thank you.
I take this opportunity to clarify that as per my earlier
statement, no Afghan fighter will ever feature on an MFN
card again. There is no sport like MMA, and any kind of
disrespect and hooliganism will not be tolerated by us.
have always said that MFN is a family and as such
we will take care of Srikant and look forward to his speedy
recovery and return to the cage We will be back with
MFN 10! God bless you all. Jai Hind!” Ayesha Shroff said.