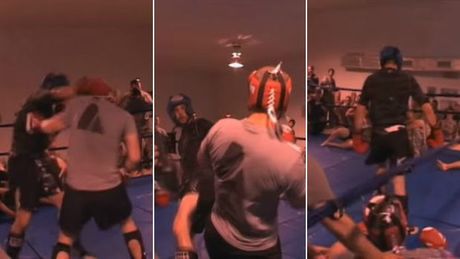 Michael Bisping has been a mainstay in the UFC for well over a decade, to be precise since 2006. With 20 UFC fights under his belt, numerous altercations with fighters and countless stories to tell, Bisping recalled one such crazy story from 2008. It was when the UFC had invited a few fighters over to visit and greet the armed forces battling in Afghanistan. BJ Penn, Urijah Faber and the ‘Natural Born Killer’ Carlos Condit accompanied Bisping. 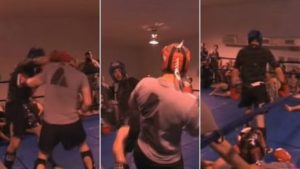 Bisping told the story in his weekly podcast ‘Believe You Me’, here’s a transcript of the narration by mmanytt.com,

“We did some very cool stuff and one of the things we did was go to an outbase where there was a very small camp set up, very little people and it was where some special forces, badasses basically, a small group of hardcore special forces guys and they had a tiny little gym set up.

“In that gym was a boxing ring and we went in there and we were meeting these guys and just shooting the s*** talking to them and then one of them says ‘would you like to spar?’

“I was like ‘alright cool. I’ll spar with you.’ So we put the gloves on and I’m just messing with the guy throwing out a couple of light jabs.”

“To be fair, the guy was cool. We had a nice friendly spar and I threw a few jabs and I took it easy and that was that, we finished. 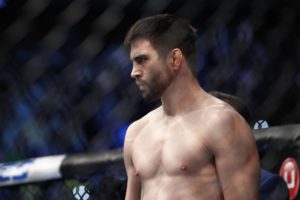 “One guy then says to Carlos Condit, another one of the special forces guys, ‘do you want to spar’ and Carlos Condit says ‘yeah, sure, no problem.’

“Oh, and by the way, they call him the Natural Born Killer, that guy is cool as f***. He never raises his voice and he’s super mellow.”

“They put the gloves on and the special forces guy says ‘how hard do you want to spar?’

“So the guy says ‘cool’ but then all of a sudden, right then and there the special forces guy BANG … he sucker punches him as hard as he can and I mean a f***ing hard shot and Carlos goes down to the floor.”

“It was a big heavy shot, but Carlos gets up, shakes his head, get’s his s** together, and then just goes at the guy.

“Everyone in the room was looking around like holy s***.

“I was like ‘oh Carlos, I’m not sure that was the best thing to do,’ but fair play, ever since I saw that I was like he’s a bad motherf***er man. He’s a great guy.”

Here is the actual clip of the incident, starting at 0:34 in the video below.

Condit sure got him on the sweet spot with the left head kick and finished him off with a big right hand. Surprising part is they were both wearing safety gear as well.