The UFC’s money-minting ideology of booking fights displayed under new-owners WME-IMG is in full force. In this new era, interim belts and undeserved title shots are being given away. Any potential match-up which can sell upwards of 300,000 pay-per-view buys is being booked no matter how preposterous it might be.

To cater to the demands of the new owners, UFC management is trying their best to make matches and also stars who can sells PPV’s. The UFC is in a desperate need of some big names. The dawn of Anderson Silva, Ronda Rousey and even potentially Jon Jones is long gone, whereas Brock Lesnar is busy making his millions in the WWE without risking getting jabbed in the face. Whether the fans like it or not but we’re currently living in the era of Connor McGregor. However, “Mystic Mac” has already made his fair share of money from his showdown against Floyd Mayweather and seems to be in no hurry to return to the octagon.

In this time of distress, where the UFC has been relying on the popularity on fighters such as Stipe Miocic and Michael Bisping, a familiar face has come back knocking on its doors. The probable G.O.A.T of MMA returns to action this weekend from a four-year long hiatus. The King of the Welterweights, Georges St-Pierre is making his comeback against one of the biggest stars currently in MMA, i.e. Michael “The Count” Bisping. GSP is a fan-favourite and has always sold PPV’s and merchandise with relative ease. Against a PPV seller like Bisping, the UFC have the chance of selling the most PPV’s this year with UFC 217.

As Robin Black often claims this fight is literally a date with destiny. As on paper it is every casual fans’ dream, where a high-rated striker faces another. However, on closely speculating we find out that there’s much more to it than it meets the eye. Let’s analyse and understand the techniques involved in this battle of superstars. 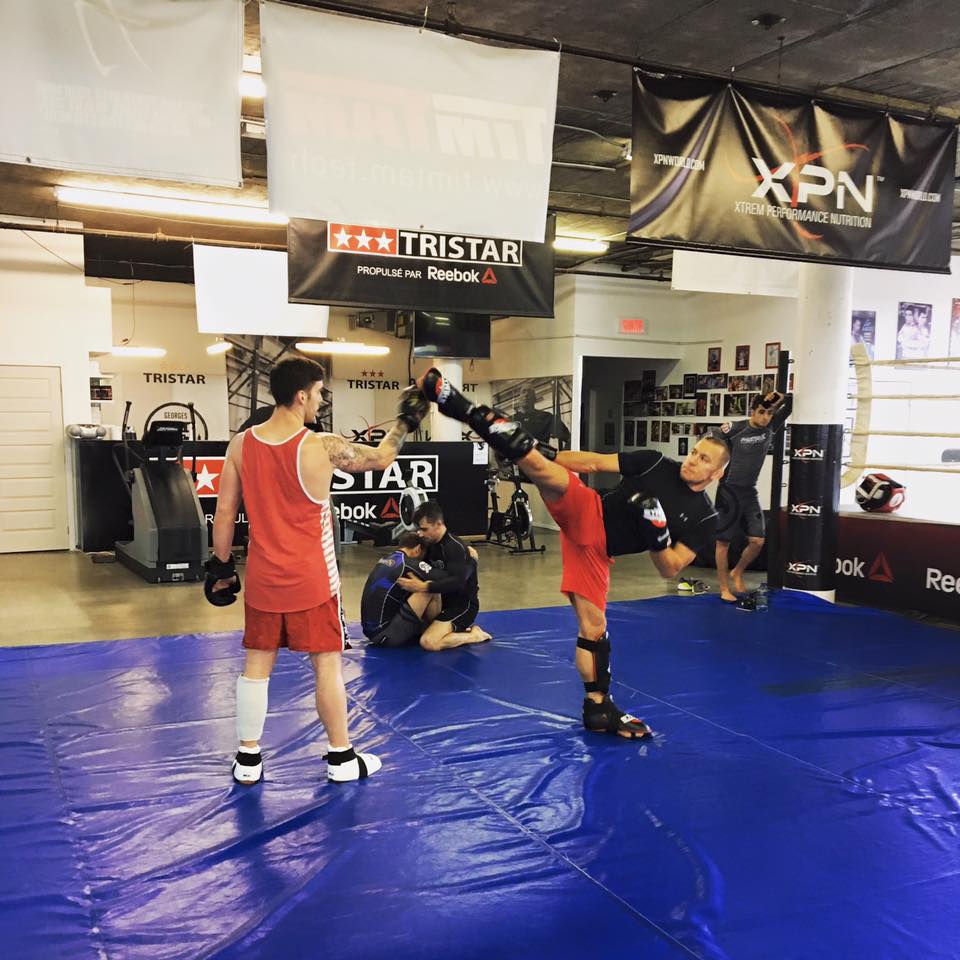 The champion is famous for his work-rate and high-volume and intensity of strikes. He holds the record for the greatest number of significant strikes landed in the UFC (1533). The charismatic Mancunian also possesses the second-highest striking defense rate in Middleweight history, i.e. 66.6 %. These numbers are enough to display the danger that Bisping poses.

Contrary to popular belief, the 185-pound kingpin possesses brutal knock-out power as well. He has showcased his punching power by knocking-out former champion Luke Rockhold with relative ease. Against someone like GSP who is a natural Welterweight, Bisping’s power will be more brutal and deadlier.

His fighting style is based on controlling the pace of the fight and obliterating his opponents with a barrage of hooks and other strikes. Once locked inside the walls of the octagon, “The Count” relentlessly hunts down and pursues his opponents. He is a highly experienced fighter with high-level kickboxing skills being the main tool in his arsenal. He uses his 75″ reach and kicks to maintain the distance while also continuously stinging his opponents with short jabs and leg kicks. His fight against Cung Lee is a perfect example of the champ’s tenacity and high-output striking. The combination with which he finished Lee consisted of more than 15 strikes.

On the other hand, GSP is a high-level Kyokushin Karate black-belt and also trains with the best boxing coach, Freddie Roach. Over the course of his career he has adapted and successfully implemented striking methods used in both of these sports. He has also perfected the art of mixing all the various striking techniques that he uses. For instance, GSP brilliantly mixes a superman jab and a right low kick.

GSP has technically great striking fundamentals. The most dangerous technique that St-Pierre currently possesses is his jab. He has almost perfected the art of jabbing. For instance, in his fight against Josh Koscheck, GSP continuously jabbed him for five rounds. The injury from the consistent jabs was so severe that the American was on the shelf for about 10 months.

In the Jon Fitch fight, St-Pierre truly displayed the brilliance of his striking skills. He used a long jab from a slightly staggered stance to knock-down Fitch more than once. He also displayed multiple combinations including precise jabs, hooks, superman punches, leg kicks and on occasion even high kicks. He also mixed up these stand-up skills with some good old dirty boxing.

GSP’s stand-up skills have gradually evolved from being Karate based into much more refined technically sound dirty-striking skills where he mixes up his strikes with clinches and majorly takedowns. He often uses his strikes to disguise and set-up takedowns, as displayed in his second bout against Matt Serra.

Even though a high-level striker himself, ‘Rush’ has often looked unwilling and uncomfortable in trading shots against other experienced strikers such as Bisping, whereas “The Count” relishes a striking battle and prefers to keep the fight standing.

Verdict on striking: The champion potentially has the tools to dominate or at least outstrike the challenger. Bisping also has the power to coup-de-grace St-Pierre, although he’ll have to deal with the stinging jab of GSP which can prove to be a herculean task. However, it’s safe to say that Bisping holds the striking advantage. 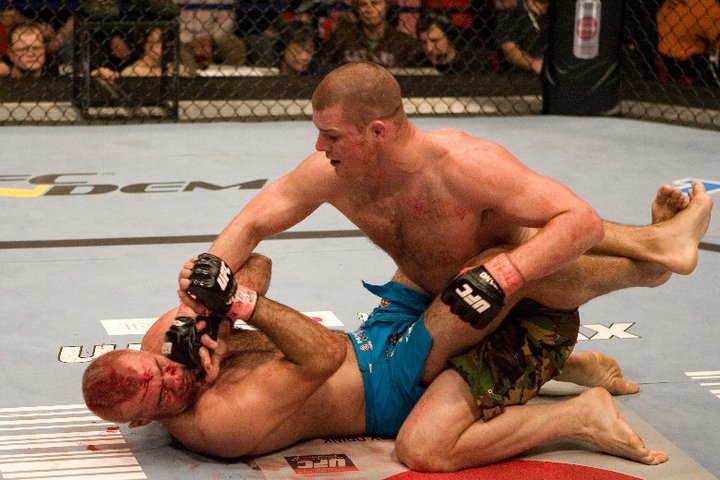 The champion is naturally more of a striker and not a grappler. However, he does hold a brown-belt in BJJ but hasn’t got the best grappling game in the division. He hasn’t got a wrestling or judo background either. However, the lack of grappling experience and skills is just a facade. The Brit has been in this business for years and has developed into a complete fighter with more than satisfactory grappling skills.

The king of the middleweights is an orthodox, instinctive grappler somewhat similar to, though not at the same level of the current interim champion Robert Whittaker. Just like Whittaker, the champion too has a surprisingly great takedown defense. Even if he gets taken down, it’s a mammoth task to keep him on the ground for too long.

He hasn’t got the most beautiful grappling technique and is very scrappy, often using up-kicks and even his head at times to force his opponent back on their feet. For instance, in his fight at Light Heavyweight even an established wrestler such as Rashad Evans couldn’t keep him off his feet for long.

As for GSP, it can be argued that he simply is the best MMA-wrestler of all time, period

The crown jewels of St-Pierre’s abilities are his wrestling and BJJ skills. In his prime, he outwrestled great wrestlers and grapplers like Matt Hughes, Matt Serra, B.J. Penn, Johnny Hendricks, Josh Koscheck, Jake Shields, etc. The fact that he had almost little to no prior grappling or wrestling background and evolved his skills over the course of his career makes it an even more special feat, that he made great professional grapplers look like amateurs.

He is more of a freestyle wrestler and likes to use a powerful double-leg takedown or shoots for a single-leg, while the timing of his takedowns has always been impeccable. The types of his takedowns can be broadly described in the following two-types:

A great example of his offensive takedowns can be seen in his bouts against Jon Fitch and Dan Hardy. When he uses his takedowns offensively, he generally backs up his opponent with a quick piston jab and a low leg-kick and then feints and shoots for a double or single-leg.

On the other hand, when he uses his takedowns defensively, it is generally to avoid getting backed up to the cage and stop his opponent from rushing forward aggressively. He also often uses the defensive takedown to save himself from getting caught in a bad spot. For instance, a vast majority of his takedowns in his fights against Nick Diaz and Johnny Hendricks were defensive takedowns.

Whether he uses his takedowns offensively or defensively, the end-product is always the same, i.e. he takes his opponent down and dishes out a vicious beatdown. He uses Greg Jackson styled elbows and hammer fists to ground-and-pound his opponent. With the help of his great BJJ and wrestling he is almost always able to maintain the top position and by utilising his long 76″ reach he can easily do a lot of damage from inside the guard of his opponents. Thus, his opponents’ guard gives them a false sense of security which in turn leads to their downfall against Georges. His submissions are also top-notch and has submitted notable grapplers such as Matt Hughes and Frank Trigg.

Verdict on grappling: GSP will take Bisping down. He will hurt the champion with his brutal ground-and-pound. However, Bisping will eventually find his way back to his feet. Though, GSP holds the grappling advantage by a country mile.

Michael Bisping’s x-factor is his tenacity, will to go on and his heart. Contrary to what people say, he has a solid chin and he fights like a zombie, i.e. no matter what happens he will continue to push forward and strike his opponent. He will take huge shots like he did in his second fight against Dan Henderson and in the Anderson Silva bout but he will find a way to go on and out-strike his opponent.

GSP’s biggest x-factor in this fight is that he has been away from the octagon for four years but has continued to train almost each and every day with experienced, high-level athletes. He trains with the best and that’s what potentially makes him the best. Even at this stage in his career, he is still adapting, learning and evolving. Neither Bisping nor the world knows what new tools will GSP bring with him when he once again makes that long walk to the octagon.

Final Verdict: Stylistically this is a match-up between an unstoppable force and an immovable object. The champion’s unrelenting, tenacious and high-output type of fighting style can be epitomized as an unstoppable force, whereas the challenger’s calm, composed, technically sound and powerful style of fighting can be epitomized as an immovable object.

GSP is probably for the first time in more than a decade an underdog in this fight. More than a vast majority of fans and pundits alike, expect a victory for Bisping. However, after carefully examining and studying both fighters, I feel that GSP will shock the world and secure his legacy and position as the greatest there ever was. Thus, I predict that ‘Rush’ will submit “The Count” in the third round.

Previous articleThe Boogeyman is out for McGregor
Next articleBisping and Masvidal clash once again for the second time this week!