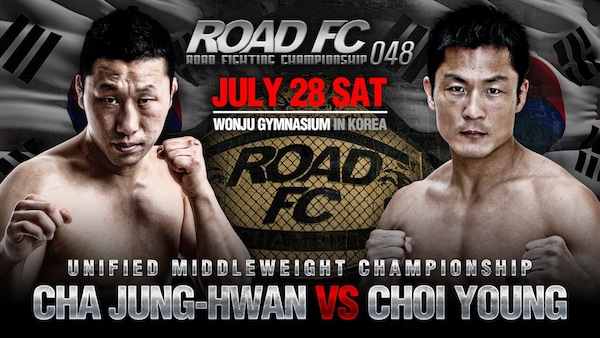 ROAD FC 048 which will take place at the Wonju Gymnasium in the ROAD FC hometown of Wonju, South Korea on July 28 2018. The Middleweight Title Unification will be held between Champion Cha Jung-Hwan and Interim Champion Choi Young. Also, prospect Hwang In-Su will face veteran Yang Hae-Jun.

The ROAD FC Unified Middleweight Championship between ROAD FC Middleweight Champion Cha Jung-Hwan (13-6-3, MMA Story) and Interim Champion “RYO” Choi Young (20-11-3, Shinbukan/Land’s End) is a match with a long history. Their first meeting at ROAD FC 035, Cha’s first title defense, set up the rematch which has taken a year and a half to be realized.

Cha is one of Korea’s first generation MMA fighters from the days of Spirit MC who holds knockouts over Ryo Chonan and Igor Gracie. He delivered powerful performances since ROAD FC 002, which culminated in a title challenge against the dominant Riki Fukuda at ROAD FC 028. The upset win was a thriller, and Cha made his first title defense against Choi Young.

DEEP Middleweight Champion Choi made his first homecoming in Korea in 10 years since K-1 and Spirit MC when he faced PRIDE Judoka Yoon Dong-Sik at ROAD FC 031. The second round beatdown earned him the contender’s shot at Cha.

The first match between Cha and Choi took place at ROAD FC 035. The back and forth barnburner needed a fourth round to break the tie on the scorecards, where Cha’s textbook jabs and punches had Ryo out on his feet. However, fans decried foul and ROAD FC submitted: Cha’s cage grabbing had blocked Choi’s go-to throws which could have changed the tide of the match, so a rematch was set for ROAD FC 039.

Choi was injured so the rematch for the Championship had to be delayed, therefore an Interim title match between Choi versus Kim Hoon took place at ROAD FC 043. Kim had earned the Challenger’s spot by trouncing former ROAD FC Champion Riki Fukuda. Kim went for the KO at every chance, but Cha stayed smart and won the 3-round war and the Interim Middleweight Championship belt.

Finally the rematch for the unification of the Middleweight Championship between Cha Jung-Hwan and Choi Young will take place at ROAD FC 048!

Also announced for ROAD FC 048 is another middleweight bout between impressive rookie Hwang In-Su (4-0, Team Mad) and veteran Yang Hae-Jun (11-5, Team Posse) who is making his debut fight for ROAD FC. Hwang’s first year run saw him knock out all opponents in the first round, including successively more experienced Park Jung-Kyo and Kim Nae-Chul – both inside a minute. Yang is expected to be the challenge to see if Hwang can last longer and show what he really knows.

From Spirit MC and Neofight, to international acclaim at Legend FC, Yang has been the powerful, threatening knockout artist with an increasing cache of weapons in his arsenal. His return after a 2-year hiatus is highly anticipated.

Hwang versus Yang will be explosive, and will point the direction up the rankings for whomever manages to win – rookie or veteran!