Former UFC bantamweight champion Miesha Tate has had her fair share of rivalry in the UFC and the most notable one being with her arch-rival Ronda Rousey, who ruled the bantamweight division for a long time. 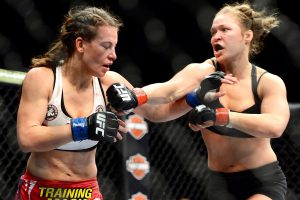 Following the loss to Ronda Rousey at UFC 168 in 2013, Miesha Tate went on an incredible five-fight winning streak in the UFC and ultimately became the bantamweight champion by defeating Holly Holm at UFC 196.

She eventually lost the title to Amanda Nunes and retired from the sport. With her coming out of retirement to fight Marion Reneau in July, ‘Cupcake’ wants a trilogy fight against Ronda Rousey.

Speaking on SiriusXM, Tate said that a rematch against Ronda would go much different than their first two fight.

"In my mind I've got six fights that I want to guarantee over these next 2 years."@RondaRousey, @CatZingano, & @HollyHolm .. If @MieshaTate had her choice, who would she like to face after her July 17th return against Marion Reneau?#UFC @UFC pic.twitter.com/5HcJA8pJit

“There’s not a doubt in my mind it would be different, for sure,” Miesha Tate told MMA on SiriusXM regarding a Rousey trilogy matchup. “I’m just so different myself, I don’t know how to explain, I just want you guys to see it on July 17. Just things that I didn’t realize and I didn’t compute before as a fighter and things I feel like I’m finally picking up at this stage in my life. I don’t know, call it maturity, maybe sitting back observing this sport, watching, and not being under the pressure to compete all the time has allowed me to kind of look at this in a more cerebral way.

“I used to very much be a brawler and tough, I still have the mental toughness, I still have the fight but I feel like for the first time I’m tapping into my fight IQ and really going to go about things in a different way than I did before. At least to start fights. Fights are fights, right? It’s liable to get crazy at any point. But I’m much different than I ever was before.” Tate concluded. (H/T – BJpenn.com)

Do you guys want to see the trilogy fight between Tate and Rousey? Who do you think wins it if it happens? Let us know in the comment section below.