Trizano won TUF 27 with a split decision win over Joe Giannetti, but questions remained. Pena picked up a win in his first fight on the show. Trizano didn’t really impress MMA fans with that performance as it was a lackluster fight.

“All three of those guys the weekend before [at UFC 230]. Shane [Burgos] with his big win, Lyman [Good] with his big win, Julio [Arce] even though he lost was in an unbelievable fight. It put fire in me man. I just wanted to go out there and do my thing. Leading up to all our fights it was really one of the first time where everybody was kind of fighting in the same time span. The gym was electric, the energy was on full blast. It was awesome to see everyone do really well. I was excited to cap it off.” Trizano told MMANews in an exclusive interview. 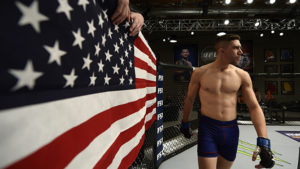 Trizano worked hard for this fight and he even shifted to Denver to train at a higher altitude under Factory-X head coach Marc Montoya who was also a part of Stipe Miocic’s camp at TUF 27.

“As soon as I found out about fighting in Denver I knew right away I had to adjust to that altitude. I knew that Marc Montoya had his gym out there, he was one of my coaches on [The Ultimate Fighter]. As soon as I found out I messaged Marc a couple of months ago. They even texted me before I texted them. They pretty much treated me like family there. I’m very thankful for them letting me come and be a part of their team for a couple of weeks. It was a good experience. They have a lot of good guys, I’d love go out there and train a little bit. They invited me back whenever I want to. I left the door open for them to come by us [at Tiger Schulmann’s].”

“I’ve never gone with Khabib, but dude’s wrestling a bear,” Trizano said. “I’m sure Luis was a ragdoll for a few weeks. I don’t know how much good work he got. It could maybe make him tougher, but I’m pretty sure Khabib tossed him around, as well as all the other guys he trained with. I don’t know if I’d want to be a training partner for Khabib, to be honest.”

Previous articleCowboy Cerrone waiting on Conor McGregor for next fight
Next articleAndre Soukhamthath to his UFC Moncton opponent: ‘You’re supposed to be out, stay down!’