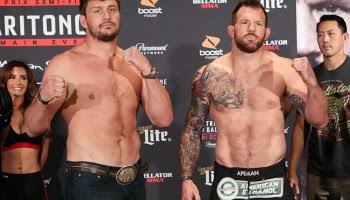 Former UFC light heavyweight Ryan ‘Darth’ Bader is having the time of his life since signing with Bellator. Bader first captured the light heavyweight title and then moved up to heavyweight via Bellator’s heavyweight grand Prix. Bader then decapitated each and every opponent standing in his way to become a double champ. However one man did go the distance against Bader unlike others, another former UFC veteran Matt Mitrione.

Mitrione, who takes on another veteran in Sergei Kharitonov at Bellator 215 this weekend, had some really good words to say about his former opponent. 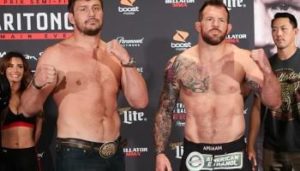 “He’s a really good dude,” Mitrione told. “He’s always been really good to me, really fair to me. So I’m happy for his success.”

Mitrione however went on to admit that he wasn’t really impressed with the fact that Bader came out to out wrestle him and grinded out a decision.

“If you’re going to do your job and come out and fight that way and throw hands and be strategic about it, then that’s great. If you’re going to try and wrestle-hump and try to get everybody pregnant, then you’re stealing it, and you don’t belong here. But that’s not what he showed.”