Mlambo warns roster ahead of Brave 10: ‘The Irish are coming’ 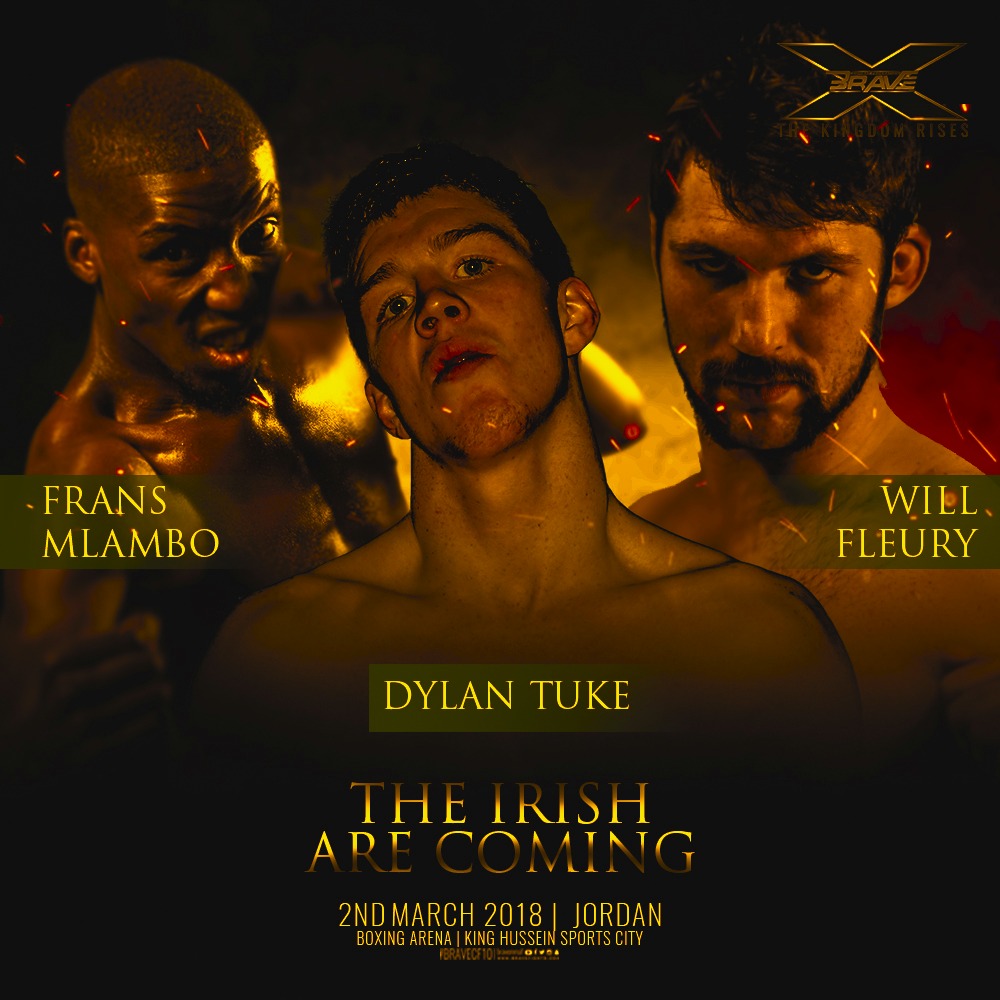 Brave Bantamweight Frans Mlambo counts Ireland as a true home, having lived in the country for a number of years since emigrating from South Africa. And he has trained with the likes of MMA superstar Conor McGregor and newly-signed Brave fighters Will Fleury and Dylan Tuke. The three SBG Ireland representatives will fight at Brave 10: The Kingdom Rises, set for Amman, Jordan, next Friday, March 2nd. And Mlambo has warned the entire roster that they are touching down on Jordan to take over their respective divisions.
Middleweight Fleury will face fellow newcomer Tarek Suleiman, while Tuke takes on American Sodiq Yusuff in a Featherweight contest and Mlambo himself has a number one contender bout against Felipe Efrain.
“I think Brave has done brilliantly to sign Fleury and Tuke. It just goes to show how popular Brave is becoming when they can attract that type of talent. I think they are the type of fighters that are going to take the promotion to the next level. With that being said, everyone in the Featherweight and Middleweight divisions, you’ve been warned. They are taking over everything, and I will beat Felipe to fight for the title at 135 lbs (61 kg)”, guarantees Mlambo, who’s gunning for the title shot.
“I think it’s about time I got a title shot. My boxing skills speak for themselves and I’ll make sure to get things done at Brave 10, get my hand raised and look for my rematch against the champion Stephen Loman”.
Brave 10: The Kingdom Rises marks the promotion’s first show in Jordan, home to some of Brave’s most decorated fighters, and the seventh country to host a Brave Combat Federation event, after Bahrain, Brazil, the United Arab Emirates, India, Kazakhstan, and Mexico.
Brave 10 Full Fight Card:
Featherweight title bout: Jakub Kowalewicz (Poland) vs Elias “Smile” Boudegzdame (Algeria)
Welterweight bout: Jarrah Al Selawe (Jordan) vs David Bear (France)
Lightweight bout: Charlie Leary (UK) vs “The Pride of Palestine” Abdul Kareem Al Selwady (Jordan)
Welterweight bout: Mohammad “The Latest” Fakhreddine (Lebanon) vs Tahar “Fast Hands” Hadbi (France)
Welterweight bout: Pawel Kielek (Poland) vs Tyler Hill (USA)
Bantamweight bout: Felipe Efrain (Brazil) vs Frans Mlambo (Ireland)
Featherweight bout: Dylan “The Nuke” Tuke (Ireland) vs Sodiq “Super” Yusuff (USA)
Bantamweight bout: Jalal Al Daaja (Jordan) vs Crisanto Pitpitunge (Philippines)
Catchweight bout (74kg): Mohammad “The Killer” Ghorabi (Lebanon) vs Gadzhimusa “Deadshot” Gaziev (Russia)
Middleweight bout: Tarek Suleiman (Syria) vs Will Fleury (Ireland)
Bantamweight bout: Nawras “The Honey Badger” Abzakh (Jordan) vs Abdul Hussein (Finland)
Middleweight bout: Chad “Superman” Hanekom (South Africa) vs Ikram Aliskerov (Russia)
https://www.mmaindia.com/ufc-marlon-moraes-vs-jimmie-rivera-worksfight-night-utica-adds-interesting-fights/