MMA fighters and fans react to the possible 165-pound division 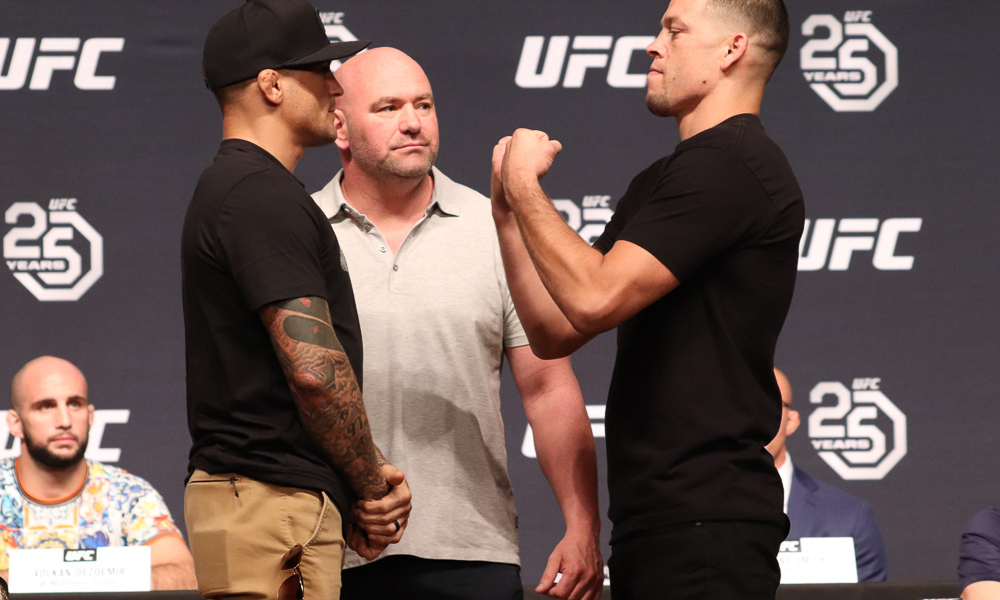 Just 24 hours ago, Nate Diaz broke the internet by announcing on Twitter that he and Dustin Poirier are going to fight for the inaugural 165-pound division at the Madison Square Garden in New York on Nov.3 and people got excited real quick and within minutes Nate Diaz’s tweet received thousands of likes and retweets.

The excitement didn’t last long as Brett Okamoto of ESPN almost immediately tweeted out that UFC president Dana White has denied any plans for the 165-pound title. Even though Dana White has denied it, there’s still a possibility of the addition of a new 165-pound division and the way people reacted on Social Media, it shows that there’s a real public interest.

Even other MMA fighters and hardcore MMA fans began to talk on social media about this potential new division.

I mean, if a 165-pound division gives you the possibility of a couple more interesting and marketable Conor McGregor fights where you can put a belt on the poster, that alone makes it a no-brainer.

It’s obvious what Nate Diaz and Dustin Poirier want at UFC 230. And it might be difficult for the UFC to ignore them. The addition of a 165-pound title is a no-brainer either way.

If you're going to create a 165-pound division, you almost have to move welterweight to 175. As many fighters who will move up from 155, you'll get just as many killing themselves trying to cut from 170. #UFC

If the UFC started a 165 pound division, who would be the immediate contenders?

Let’s play the scenario game.. if Nate and Dustin fight for the new 165 pound belt for real, that’s best case scenario for Conor’s next fight, especially if he beats Khabib. He has victories over both Dustin and Nate, but a trilogy fight with Nate, to be the first ch-ch-champ?💰

If @ufc make 165lbs division you can count on me for that run.

There’s also a huge possibility that if Nate Diaz vs Dustin Poirier turns out to be a new 165-pound championship fight, the winner of the fight might end up fighting Conor McGregor in a money fight.

Tickets for UFC 230 are scheduled to go on sale Wednesday, despite no official main event. Other fights on the undercard include a middleweight rematch bout between former champions Luke Rockhold and Chris Weidman.