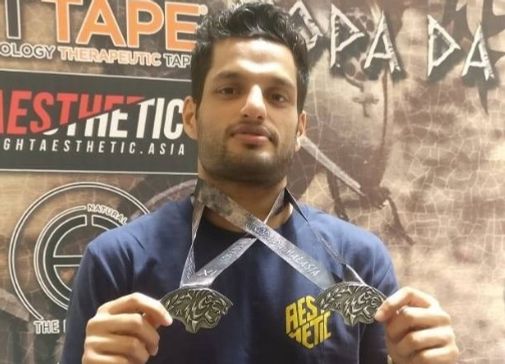 The First ADCC India Nationals (open only to Indians) is set to take place on the 23rd of February 2020 at DLF Avenue Mall, Saket, New Delhi. India. The tournaments have been divided into three categories. Beginners, Intermediate and Pro.

ADCC is one of the most prestigious grappling tournament in the nogi world. It stands for Abu Dhabi Combat Club and was started by the Abu Dhabi royal family. The Royal family had close relations with the Gracie family and other BJJ royalties and they were bought in to train at ADCC. Ultimately those athletes influenced the club to organise the ADCC tournament.

The full details of the ADCC Nationals regarding the rules and registration can be found here.

This is the second time ADCC has organised an event in India. Ahead of the ADCC Nationals, MMA India Show had the opportunity to talk with Siddharth Singh, CEO of Crosstrain Fight Club, who is one of the organisers of ADCC.

1.) What are the implications of ADCC Nationals? Do the winning athletes in the pro category get a chance to grapple at ADCC world championships?

Ans: So the ADCC world championships doesn’t happen every year. It’s so big that it happens once every two years. Now to make it to the Abu Dhabi Combat Club, you have to either be invited or you qualify for it.

No Indian has ever qualified for the world championship from India. So last year, I went to Taiwan to compete in ADCC Taiwan. I won in my weight class and came second in the absolute division. Once I was there, I was approached by the team from ADCC Asia, who offered me an opportunity to host ADCC India. So that’s how we got started with organising ADCC in India. 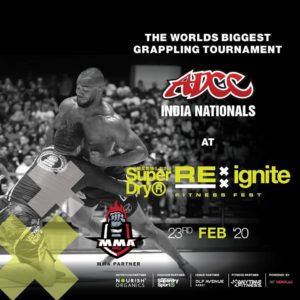 This is the second time we are organising ADCC tournament in India. The first time that we organised was ADCC India open, that was six months ago. That was in Gurgaon. It was a trial event for us just to see what the appetite in India was for this. We had about 150 registrations for this with about 30 people coming from abroad for this.

This was is the ADCC India nationals. The difference between the nationals and open is that in the nationals only people with an Indian nationality can take part.

So people who win the pro category will get a chance to compete at the absolute division. The guy who wins in the Pro division/absolute division will qualify for the Asian trails that will happen in Singapore later this year. We as ADCC India will sponsor his flight and bis registration fees for the ADCC Asia trails.

Now if they win the Asian trails in the pro category, they will get an invite to ADCC world championships which will happen next year in the US. So what we have done is we have created a pathway for Indian athletes to make his way to the world championship to compete with the likes of Gordan Ryan, Keenan Kai-James Cornelius etc.

Earlier we didn’t know how to get there. Now there’s a path. You win the Indian nationals, you go the Asian trails and then you get invited to the world championships.

2.) You have seen the growth of MMA and BJJ in India, how do our grappler compare to the elites from Brazil, US etc?

Ans: They are obviously at the infancy. So grappling has been in India for the longest time, you know Kusti, Wrestling has been around forever. But in essence, it’s quite different from what happens in North America or Brazil. Because in our Khusti, you have to put your opponent’s shoulders to the mat but in Brazilian Jiu-Jitsu and grappling pinning shoulders does nothing.

There is a point system and there is a submission system. So even though people might have a wrestling background in India. It’s not comprehensive enough because there are no submissions, joint lock etc. That is to say, people with a wrestling background definitely have a foundation and can do really well. But for them to be competitive with the Brazilians or Americans, they need to add submissions to their arsenal. So our wrestlers are very good at takedowns, pinning the shoulders on the mat, but not as good in getting submissions and chokes.

3.) I can see there are a lot of weight/age brackets in the upcoming ADCC Nationals. How many participants are you expecting per weight class and is there a minimum threshold number of participants you would like to see?

Ans: As I said, last time we had 170 participants. This year we already have 216 registrations from all over India. So we are targetting 300 fighters. Last time we had 2 mats, this time we had arranged 3 mats. We are calling officials from abroad. So yeah, it’s going to be a high-quality event and 300 participants are what we are expecting.

4.) Where are the officials coming from? Will ADCC provide it and is there a governing body for BJJ in India?

Ans: No there’s no governing body that we are using from India for this event. Our governing body is ADCC…the head office. The ADCC is run by the Shiekh of Abu Dhabi. He is the head and his organisation is sanctioning this event. The officials we are getting from Kazakh person currently residing in Turkey. He is a level B certified referee.

5.) What can fans expect from ADCC this year and is there a specific weight category that fans should be looking forward to?

Ans: This is the first time we are doing a pro category in India with an absolute division. So for the first time, we will definitely find out who the best grappler in India is. So people talk about stuff like..this guy is the best…that guy is the best…But the professional with open weight class..absolute division decides the best grappler in India and with all the gyms sending in their top guys this time, we will find out who is the top guy in the country. So I think that is the most interesting part of this event.

6.) Is there a way to find out which grappler should be competing at the beginner, intermediate or the pro level? As you earlier said that grapplers with different years of experience are characterised in different categories.

Ans: In Martial Arts, we sort of expect a level of sincerity. So when a fighter says that they have five years of experience we have to take them for their word.

If someone comes and says that……. ‘I am a beginner and I have been doing BJJ for less than two years and I lie and I win it but I have doing BJJ for four years, so what happens in that next year I cannot take part as a beginner’.

So if you win the beginners category, next year irrespective of your experience, you cannot take part in the beginners. You have to move up to intermediate.

7.) Can anybody take part in this tournament or do they have to be associated with a particular gym?

Ans: No you can sign up as an independent as well. But usually, if someone is a grappler or a martial artist, they usually have a gym at which they train in, so they need to have an affiliation. But at the same time, even the freelancers can compete.

MMAindia.com is the official MMA partner of this year’s ADCC India Nationals.

Arjan Bhullar could be fighting for the ONE Heavyweight Championship in May 2020!

Previous articleArjan Bhullar could be fighting for the ONE Heavyweight Championship in May 2020!
Next articleUFC 247 Embedded: Vlog Series – Episode 1