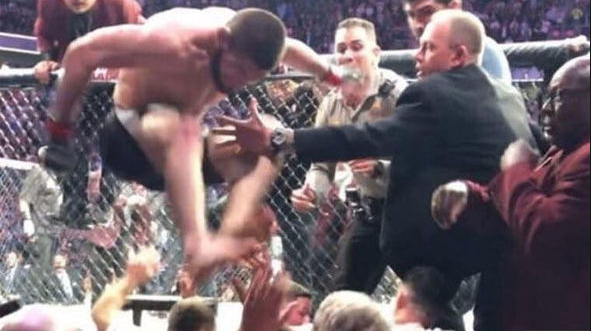 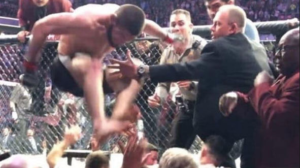 Dillon Danis then sprung back and started to wade into Nurmagomedov. He connected with a couple of blows and Khabib was forced back himself before being pulled from the scene by the security team present at the T-Mobile Arena.

However, it turns out the reason why Khabib jumped onto Dillon Danis was that of the religious abuse that Dillon kept on spewing on Khabib throughout the fight.

Gurdarshan Mangat, who hails from Canada and is a professional Mixed Martial Artist recently gave an exclusive interview to Parvin Dabas of  The MMA India Show and he gave details of the behind the  scene that went down at UFC 229 as he was present at the fight.

During the interview, Parvin asked Mangat, if Conor had pushed him too far after all the talk about family and religion or whether he just had enough and Dillon Danis constantly calling him out wasn’t enough:

“Exactly, so that’s where I say, people think that this was just a built up stuff where Khabib just exploded, he didn’t just randomly explode, there was stuff coming from Conor’s corner, where they are calling a Muslim rat throughout the fight and Khabib even talked to Dillon Danis at one point” Mangat said.

“Like, I have chilled with Dillon Danis also, he is a great guy, he is a chill guy ……… but like I say, man, the UFC was almost like go ahead, go ahead keep doing it [ The promotion built on the religious and political factor]. Like, I don’t think these guys knew where to draw the line because there was nobody telling them on where to draw the line” Mangat said.

“Now you are in this hostile environment and there’s this much-anticipated fight, the action going on….and you’re still saying that stuff [Muslim rat] and Khabib heard it while holding Conor against the cage,” Mangat said.

Gurdarshan was later asked by Parvin and how he knows about it, to which Mangat replied:

“It was going around…….that’s what happened and the Muslim rat thing, I was hearing it from quite a few sources out of Vegas and that’s what made Khabib jump over and he is like ‘I will attack your ass too'”.

“That’s why he didn’t go to after Kavanaugh, he didn’t go after Owen Roddy, he went straight for Dillon because that’s who he[Khabib] was hearing and it was when Conor was pressed up against the cage by his corner and apparently Dillon was saying this stuff and that’s what made him explode towards Dillon Danis and not anyone else on the team”.

And according to Mangat, Khabib jumping over the cage towards Dillon Danis had nothing to do with the bus attack in Brooklyn or all the political stuff Conor said during the press conference.

He added, “It wasn’t anything that happened with the bus attack, it wasn’t all the political stuff, it wasn’t all the stuff that was built during the press conference from what Conor said; that stuff was dealt with, he beat Conor and he was content with that, it’s what Dillon was saying and it made him explode at that moment because there was so much like…. he like you know, he was sitting on the ground looking over at Conor’s corner and then Dillon might have said one more thing, which, ah…..I don’t know what he might have said at that moment, that’s what made him go jump that and go after him[Dillon] too”.