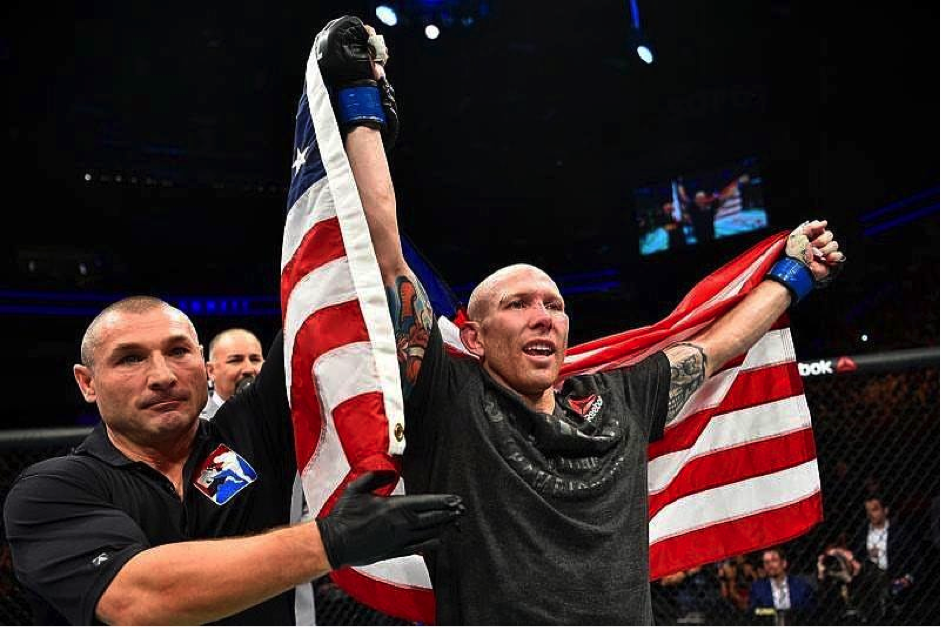 Josh Emmett recently entered the octagon as an underdog in his bout against
Ricardo Lamas. After a quick yet brutal one punch KO, he made the world
notice his arrival in the UFC’s Featherweight division.
All doubters as well as critics were silenced by that knock-out as Emmett is
now ranked #5 in the UFC’s Featherweight division. With a great grappling
game and hydrogen bombs masquerading as fists, he is surely one of the
biggest talents in the UFC.
In an exclusive interview, Josh Emmett talks about his rise to fame, famous
knock-out of Lamas, title plans as well as his teammate, Cody Garbrandt and a
lot more.

Sangam Shukla: In your recent post-fight interviews, you’ve talked about
how you and your boxing coach noticed some holes in Ricardo Lamas’ boxing
game. Shed some more light on to that.
Josh Emmett: I’ve been training at Team Alpha Male for over 10 years now and
unlike the mainstream fans, a lot of the hardcore fans already knew who I was.
With the Lamas fight I got the opportunity that I had wanted, i.e. to show
everyone how good I can be.
My boxing coach Joey Rodriguez and I, we just knew that stylistically it was a
great match-up for me. We knew that he is quite tough and is truly one of the
best fighters in the world but I’m one of the best as well. We knew that he
won’t be able to handle the power I possess. We knew that I only needed to
have one clean shot and that I could finish the fight. We watched a lot of tapes
to study his striking and I just knew that my striking was much superior than
his.
We knew the outcome of that fight even before it started. My teammates,
coaches weren’t surprised with the outcome of that fight, but the world was.

SS: Lamas is a veteran of the sport. Even before entering the UFC, was he
someone that you always thought you could beat?
Josh: Yeah, I’ve been a fan of the sport since before it was mainstream. Even
before I was in the UFC, I had watched Lamas fight and always knew that he
would be a good match-up for me and I always wanted to fight him.
I’m a fan of the sport and a fan of a lot of these fighters and that’s what makes
it surreal that I am now competing with these guys. I respect all fighters.
However, I fear no one and it’s just a matter of time before I get that belt.

SS: You have a wrestling background. What initially got you into wrestling?
What made you transition to MMA?
Josh: I’ve been an athlete my whole life. I catch on quick and adapt, I’m really
quick and athletic but the reason why I got into wrestling was because a close
friend came from a wrestling family and his father was my baseball coach and
he always saw some potential in me for wrestling. He always insisted me to
wrestle, so I finally gave it a try and just fell in love with it. I was undefeated in
my first year of wrestling and won a couple of tournaments. My wrestling
career just took off from there and I used wrestling as a tool to essentially pay
for my degree.
After wrestling for four years in college, you only have two options, i.e. either to
try and go for the Olympics or get into MMA. I was already a huge fan of the
sport. Hence, I just went for MMA.

SS: You’re also a no-gi grappling world champion. Tell us more about that.

Josh: My Jiu-Jitsu coach knows how good I am. I roll with black-belts and can
hold my own against them. I haven’t done GI too much, I started doing that a
few years ago and I’m currently a blue-belt.
My coach wanted me to participate in the no-gi world championship and I did. I
won every single match on my way to the finals and no one even scored a
single point on me and in the final, I submitted my opponent and even he
couldn’t score a point on me.

SS: You have great boxing. How long have been training for it?
Josh: I have been boxing since 2005. I think that I’m a well-rounded martial-
artist but I do love boxing a lot. Before I got into UFC, my boxing coach
suggested that I should take some pro-boxing fights and he though that I’d do
well in that while also making some decent money at the same time. However,
before I could do that I got into the UFC.
I go to a lot of boxing gyms and spar with pro-boxers and their coaches before
they knew me would ask Joey about how long I’ve been boxing for and ask him
my credentials on that.
Training with Joey has taken my boxing to a whole new level.

SS: You made your UFC debut at Lightweight. The Lamas fight was your first
fight at Featherweight in a long while. Which weight-class do you feel more
comfortable in fighting at?
Josh: I feel more comfortable making the weight at 155. Though, I feel that I
need to be at Featherweight. I’ve fought at 145 before in my career and feel
that I can make the weight. Also, the reason why I want to fight at 145 is
because I feel confident that I can get the belt and I want a run with the title.
I fought just a few weeks before the Lamas fight at 155 and accepted to fight
Ricardo at two weeks notice. That is why I missed weight because there simply
wasn’t enough time. I know that it’s wrong and it won’t certainly happen
again.
As for people who think that I didn’t deserve that victory because I missed
weight, if you fight then you know that in such a situation two pounds don’t
make any difference.

I personally always hope that my opponent misses weight so that I can take
20% of their purse. (chuckles)

SS: You suffered your first defeat last year. How did that affect you?
Josh: I feel I won that fight. I believe that I won two rounds and Desmond won
one. However, we fought in Buffalo, New York and he is from there. Hence, I
feel that I got “home-towned”.
I did take a few positives away from that fight. I had to re-evaluate my career
and decided to make the cut to Featherweight.
A lot of people say that you learn when you lose. However I disagree, losing is a
really bad feeling that certainly no athlete wants to experience. I didn’t learn a
lot from that loss, it just made me realise that I should move to 145 pounds.

SS: You’re ranked fifth in the UFC. How does it feel to be in the upper
echelons of MMA?
Josh: It feels great.

SS: What’s it like to train at Team Alpha Male?
Josh: TAM is one of the best teams in the world specially for fighters of lighter
weights. We have so many guys that are in the UFC and many are on the verge
of being in the top organisations. It’s one of the toughest rooms with the
toughest people around. Our practices can be at times much tougher than the
fight itself.

SS: Cody Garbrandt recently lost his Bantamweight title to bitter rival, T.J.
Dillashaw. How is he taking that defeat?
Josh: Urijah is a great mentor to all of us. He always says that in MMA, one
should have a short memory. There’s nothing you could do to change it, you
prepared for it and did your best. Move on and don’t dwell on it. Get better and
get it back.

Cody is so young and talented, he still has a long career ahead of him. He is
right back in the midst and is training over in Thailand. He’ll be back in
Sacramento soon to practice with the team. He’s a phenomenal athlete, one of
the best and there is no doubt that he will surely get it back.

SS: What’s next for you? Do you have an opponent in your mind?
Josh: I’m currently in Italy enjoying a vacation. Once I’m back in California, I’m
going to be straight back to training.
I’m currently ranked fifth. Hence, the fight which makes the most sense for me
is to fight someone ranked higher. Jose Aldo is ranked #1 but he has lost three
out of his last four fights, below him is Frankie Edgar and he’s going to fight for
the belt next. Hence, Brian Ortega is the only one left. Ortega is still undefeated
and has got a lot of hype behind him. I feel that the fans would also want to
watch us fight. Thus, I want to fight Ortega and then I want to fight the winner
of the Holloway-Edgar fight.

SS: A message for your fans.
Josh: To all the people who’ve believed in me, been there for me and supported
me, I am truly grateful and blessed. I promise that I’ll keep on giving you guys
great fights and performances. I just want everyone to know that whenever I
fight, I will try my best to put on the best performance of the card. I fight to
entertain.