MMA India Exclusive with Chhote Lal: Mary Kom will continue fighting even after she is 40! 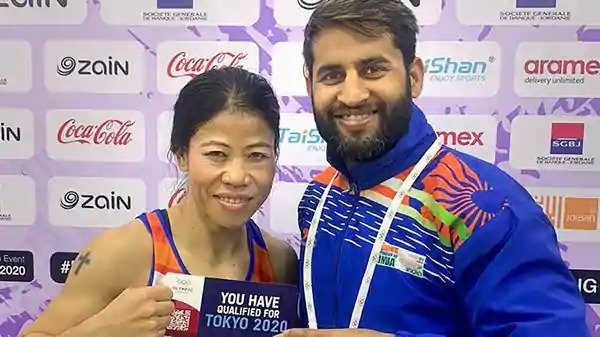 The ongoing Coronavirus pandemic has brought the world to a grinding halt.  Sporting events around the world have been cancelled and as a result, athletes have had to spend their time in lockdown.

Even the Tokyo Olympics which was scheduled to take place later this year has been postponed till 2021. With the imposed lockdown the preparation of athletes for the Olympic games has been affected.

Things aren’t different for Chhote Lal Yadav, who is well-known amongst the boxing circle for training Mary Kom. The MMA India Show had the opportunity to chat with him and get meaningful insights on his boxing journey as a coach and Mary Kom’s boxing career and her preparations for the Olympic games next year.

1.) How are you doing under quarantine? How have you been spending your time during this lockdown?

2.) How did you get started as a boxing coach? Did you do some boxing yourself?

Around 2012, I was a part of the national team and around that time, the trails were taking place for the London Olympic games. That time, I defeated Shiva Thapa in the first trails and then lost to him in the second trails (19-20) and after this, I suffered from a back injury at the L5-S1 (The lumbosacral joint, also called L5-S1, is a term used to describe a part of the spine. In fact, L5-S1 is the exact spot where the ​lumbar spine ends and the sacral spine begins) part of my spine. There was a slight gap in the L5-S1 and following this I left my camp and came to Army Sports Institute in Pune.

Here I underwent treatments and after getting better, I became an assistant coach at the ASI and by that time I had already decided that I didn’t want to box anymore. At that time, I had been boxing for over 15-years and after becoming an assistant coach, I got my coaching diploma from NIS, Patiala and was the topper in the 2014-15 batch.

3.) Had you not suffered from a back injury, would you have still continued boxing?

If I hadn’t suffered from a back injury, I would have done boxing longer. I was teammates with Manoj Kumar, Vijender Singh, etc. In the 2009 Asian Boxing Championship and 2010 Asian Games, both of which were held in China, I was the teammate of Vijender, Manoj, Dinesh, Suronjoy.

4.) You’re also a subedar in the Indian army? How do you manage your time as a coach and an Army man?

When I am present at the Army Sports Institute in Pune, I train boxers there. After I topped my diploma from NIS, Patiala, I was given special permission from the Army to train Mary Kom from 2o15.

Even before that, I was coaching part-time, but following my diploma, I was told by Olympic gold quest to coach Mary Kom full-time.

5.) When you got the opportunity to train Mary Kom, how was your reaction? Do you feel some pressure when training Mary because there are a lot of expectations?

Mary Kom is already one of the best boxers in the world. So when I got the opportunity to coach her, She was performing well so my only aim was to keep her performance intact.

I had full confidence in myself. Me and Mary have competed at the 2010 Asian games together. However, after coming to a coaching life, the relationship between a coach and a student changes.  In the coaching line, self-confidence is extremely important. Also important is knowing how to train each boxer differently.

The responsibility of a coach is to cater to the need of his athlete. A coach is a psychologist, a motivator, a friend and numerous other things put together. Prior to becoming a coach, if I wasn’t a boxer myself than coaching would have been extremely difficult for me. I have competed in over 25 internationals and for three-times in a row, I was the champion and awarded the best boxer. I have medalled seven to eight times at the nationals. I have won gold at SAF games, Asian Championship gold and a silver medal at World Military championship.

That’s why it was easy for me to connect with the boxers as a coach, so I took it upon myself as a challenge that I would maintain Mary Kom’s performance.

6.) Did you face any difficulties when training Mary Kom? What is her attitude in the training camp?

In 2015, Mary Kom appeared at the Rio Olympic trials and she performed well. Mary won a bronze medal after losing in the semi-final bout. In reality, Mary didn’t exactly lose the fight, she was a victim of hometown judging. So I wasn’t much disappointed and I was ready to work with her on her flaws.

Mary had reached the semi-finals and was scheduled to fight a Chinese boxer. The qualifiers were also taking place in China. Had she not fought the Chinese boxer in China, Mary would have fought at the 2016 Rio Olympic game as well.

After this,  we were disappointed and Mary’s morale was also down slightly. However, Mary’s biggest strength is her attitude. She never gives up. She always learns from her mistakes and I have never seen a boxer like her, she is very strong mentally. 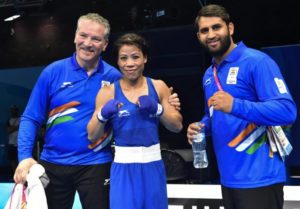 We also suffered a lot during that time because of the lack of federation. India’s boxing federation was suspended from 2012 to 2016 and our boxers suffered tremendously during this time. In December of 2016, India got a new governing body in the Boxing Federation of India. Ajay Singh became the president of BFI and from December 13 onwards, Boxing operations were resumed in the country. BFI has been good for Indian boxing, they are supporting us in everything. Their support has been very crucial for us and during every event BFI officials are present there and these things matter. If there is no federation, how will anyone support you? When there are no federation, our representatives were not present at these international events, that is not the case now.

7.) How is your relationship with Mary Kom? Do you treat her like a student or a friend?

During training, our relation is strictly like a student and a teacher. However, when training is over, we usually crack jokes and enjoy our time.

Mary is a fast learner and always respectful. She always listens to me during the training camp. Otherwise, after achieving so much like Mary has, who listens to others?

8.) Mary Kom is 37 years old, do you see her slowing down? How long do you think she can continue boxing at a high level?

Injuries should be avoided at all cost. Mary is 37 and at this age, injuries shouldn’t happen at all and she is even faster than 18-year old boxers and this is possible only with SMART training. Other boxers do all sorts of strength training, free hands etc. Now I can’t do that with Mary, so I make a customized training program for Mary. She does specialized and explosive exercises meant for specific parts of the body. That way Mary maintains are speed, strength and remains injury free.

This should be done for other athletes as well. At 37-years old, it’s not easy to maintain same performance throughout. From 2017 onwards, Mary has won gold at Asian Championships, Commonwealth Games, World championships. She must have won at least six to seven gold medals since then.

I don’t think she has ever taken a day off. Every day, she works out at least once. Even during this lockdown I send her specific training program and make sure that she doesn’t injure herself because there is no one to observe herself. The way she is performing, I think she will continue fighting even after 40.

In Boxing, the important aspect is agility, speed, reaction and flexibility. Mary’s flexibility and speed is even better than young boxers. She says ‘If I don’t do boxing, what would I live’, So I don’t think she will leave boxing anytime soon.

9.) What is your expectation from Mary at the Olympics?

I have always told Mary to give her best. This will also be her last Olympics because she will be 38 next year and the age limit for Olympics is 40. I would say that we are working very hard to make sure that Mary brings an Olympic gold. This way she can fulfill her dreams and mine.

10.) Amongst 9 boxers that have qualified from India, who do you think will bring medals for India?

I can’t say who will bring for sure, but I expect atleast three medals for sure. However, if we are able to get a favourable draw then India can expect more than three medals as well.

Previous articleUFC News: Khabib wrestles bears….Zabit spars with a goat?
Next articleFormer BRAVE CF champ Abdoul Abdouraguimov is on a road to redemption