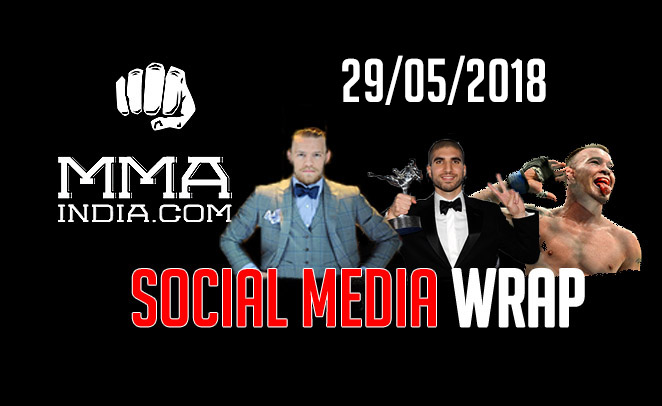 The weekend was filled with big sporting events, with Real Madrid winning their 13th champions league title to Chennai Super Kings winning the IPL, but the MMA world had its fair share of entertainment. Bellator celebrated their bicentenary event and UFC hosted their first ever event in Liverpool.

Here is a round-up of the happenings in the matrix, these past few days. 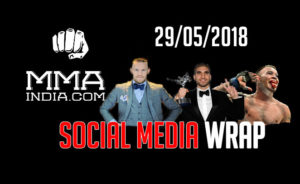 Khabib Nurmagomedov might be the new sheriff in town, but everyone wants the red panty night.

Kevin Lee is coming off the biggest win of his career vs Edson Barboza, and Lee hit the streets of Bangkok to celebrate.

Kevin sure does live up to his surname.

GSP was interviewed by Joe Rogan recently on his podcast, JRE and GSP was animatic as we’ve ever seen him. He even brought his ‘Max Holloway’ out of him.

Bleep you @GeorgesStPierre you’ve taken everything I worked for, I’ll fight your ass.😂😂😂😂 #itiswhatitis pic.twitter.com/hJBvjDEa07

Ragin’ Al Iaquinta other than being a total bad-ass in the UFC, is a certified realtor. A fan questioned him on a potential fight with Conor Mcgregor, and he didn’t miss the chance to pitch a sale.

You can bet your house and then I will help you find a better one https://t.co/SDXLvBdjIz

Colby Covington takes the mickey out of Darren Till

The MMA world was shocked when Darren Till walked on to the scale weighing 3.5 lbs above weight for his fight with Stephen Thompson. Fellow WW contender Colby Covington was not the least bit pleased.

Darren Till previously admitted to his weakness in-front of a cake.

Darren Till has failed to make the weight for his #UFCLiverpool bout v Stephen 'Wonderboy' Thompson.

This is what he told us earlier in the week about struggling to stay disciplined to make the weight. pic.twitter.com/pluhqdZXrh

50 cent posted a series of photos of an ‘alleged’ conversation of Mayweather and himself.

Contrary to 50 cent’s claims, Floyd Mayweather posted a picture to celebrate himself joining the billion dollar league of athletes.

Michael Bisping announced his retirement earlier in the day, and wishes poured out all around social media.

My guy @bisping is getting out of the game. Congrats on a great career my man. You earned it! You made people care one way or the other and you won and won a lot. That’s what matters man. Congrats my man! DC pic.twitter.com/sD1rwNtz20

Congrats to @bisping on his retirement ! He has accomplished so much in this sport and is def a future hall of famer! Unfortunately we never had the opportunity to fight in the octagon but it was a pleasure just to trash talk back and forth a few times ! Future is bright. Enjoy!

Congrats on your amazing journey @bisping was a pleasure to train and help you a bit on this journey. Much respect

First UFC event I covered in person was TUF 3 Finale, Bisping's official UFC debut. 12 years later he says goodbye. What a run — from winning TUF to building the UK market to winning the belt in the most improbable way — with nothing left to prove. Bravo, Mike. You did it all.

Congratulations @bisping you fought them all and you proved your mettle time and time again. TUF Champ, most wins in ufc history, most fights in ufc history, @ufc middleweight champ. 👏 Time to enjoy your life even more. You earned it!

‘You’ve got to know when it’s time to walk away. I’m almost 40 years old. The time is now!

Bisping took all the plaudits and wishes in his usual – casual style.

Utterly blown away by all the beautiful messages regarding my retirement. I have so many people I need to thanks but right now, thank you for the kind words. I should retire more often 😂😂😂

Thanks for all the memories Michael ‘The Count’ Bisping.

Previous articleIMMAF gold medalist explains choice for Brave
Next articleUFC: Jimmie Rivera says he does not have any respect for Marlon Moraes