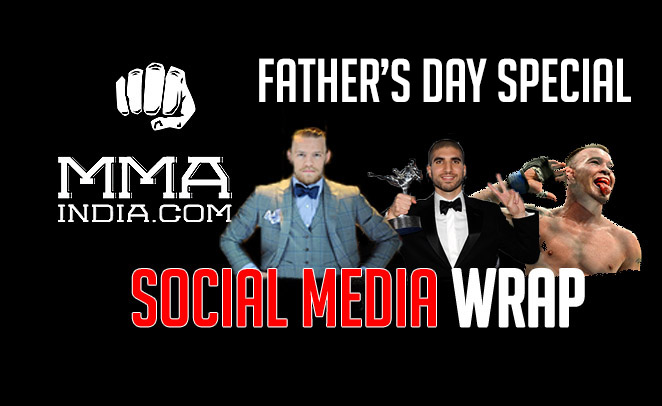 The whole world is busy with the FIFA Football World Cup and MMA didn’t have a major event over the past weekend, but it is Father’s day and MMA fighters were in unison to celebrate The Man. 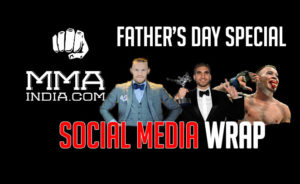 It is startling how similar Barboza Jr. looks to his Senior.

Frankie Edgar might have tucked in early, but he doesn’t forget to pay his tributes.

Fell asleep early but I wanted to wish @frankanneseplumbing a very happy Father's day. Thankful for all that you do for our family!

‘Pantera’ Yair Rodriguez posted a cute photo of his parents to show his appreciation.

Jessica Eye posted a strong message for her followers to rise above hate and love no matter what. Kudos to her.

Father’s Day …. Our relationship was a constant battle that ended tragically. I don’t talk about my childhood or early adult years and how we ended but it’s always my motivation. it’s chapter most couldn’t handle to live or believe. You raised me the best you could and no matter how fucked up it got you love me even if you expressed it wrong. I am sorry life treated you bad that you reflected it to me in so many different forms of abuse. Id be a fool to hate you or hold on to nonsense I can’t Change or take back. I think about you always and it’s gonna continues to make me great. Your demanding voice and strong ways are the best qualities I gained from you. Sometimes I wish I could have been your friend not your daughter because you could be really great at times . BUT thank you for lacing me with game and spunk Randy Eye this is my week and watch me take what’s rightfully mine in life 😈. #EYEbelieve #evil #rip #champion #winner #fathersday #braincancer #gbm #meanmotherfucker

Tecia Torres spent Father’s day with her better half and her Father-in-Law, and she seems to have had a jolly good time.

Deep Sea Fishing 2 Tecia 0 🤣🤢 Spent Fathers Day on the water with papa in law 😁 Threw up 2x but caught a tan 👙 & 🐟 @raquel_pennington 🌊 Happy Fathers's Day to all! SideNote: Next time I'll take medicine. I thought I could handle it, thought wrong 🤷🏽‍♀️

The Preacher’s Daughter posted a picture of herself with her ‘pops’ to show her blessings.

Happy Father’s Day:) I was blessed with the best. Thank you for a lifetime of love and encouragement. #happyfathersday #blessed

Various other fighters took to Social Media to appreciate the most important man on the planet.

Happy Father’s Day to my pops, I know things are tough right now pop but as you’ve shown me my whole life things will be ok. Thanks for showing me how to be a strong, hardworking, loving father to my wife and kids. Thanks pop. Happy Father’s Day Mr. P. We all love you. pic.twitter.com/PIvMEJun1m

Happy Father’s day to my amazing Pop, for always putting ur boys first! The happiest most positive dude I know! And my awesome step dad Tom, for Kk👧🏼 and always having our backs! I’m a lucky dude.

#happyfathersday To this handsome man right here! Love you pops and thanks for EVERYTHING you do for me. I wouldn’t be the man I am if it wasn’t for you! #father #family #thaman #love #respect #igdaily #igers

Happy Fathers Day Pops and to all the fathers out there!! . . . Not many people live the life I live and no all get to have a father in their life. I was blessed to live this life and I get to do it with the best father the Lord could've given to me. From the childhood lessons to the adult lessons hes still instilling in me. Theres no other father I'd want to call my Dad. From hunting, fishing, motorycle riding, work, and road trip partners. I know at any point in time I can always count on my Pops to be down to ride. Because I am my father's son, and no matter how irritated he makes me or how country he can. I'm always proud to claim him as my Father. . . . #happyfathersday #mydad #pops #hunting #partners #roaddog

Happy Father’s Day. I was lucky and blessed with a great one. pic.twitter.com/Muxe3CAP4f

Happy Father’s Day to the myth the legend the one and only GT (Gramps) #fathersday #gramps pic.twitter.com/qdem96seYn

Happy Fathers Day to all the Dads out there doing their thang! Keep leading by example and filling them with confidence!

Happy Father’s Day to the hardest working man I know. Thank you for supporting us all in everything we do pic.twitter.com/jp3n0OVDfJ

#HappyFathersDay to the man who taught me about work ethic and perseverance.. 🤗 Happy Father’s Day Pops. Kindred spirit. ♥️ love you

I was missing home today on #fathersday away from my dad n being away from my daughter. These guys show me again why I'm so fortunate to have them in my life. Without their generosity I literally wouldn't be able to train with the best n chase greatness in the @ufc #Thankyou✊ pic.twitter.com/oTH2rN7KLV

To end it off, arguably the most famous dad in all of MMA.

Weidman is still his boy.

UFC: Tyron Woodley responds to Colby Covington’s sister, says she tried to slide into his DMs

Previous articleFlyweight title picture hangs in the balance for Danny Kingad in Macau
Next articleUFC: Colby Covington shares thoughts on exchange with Michael Bisping, calls him a ‘one-eyed twerp’