MMA: Megan Olivi to Ronda Rousey: I wouldn’t be where I am without you 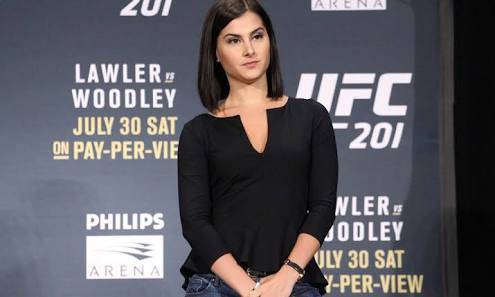 Former UFC women’s bantamweight Ronda ‘The Rowdy’ Rousey is currently pursuing her combat career under the banner of WWE. Rousey was the first women’s champion in the history of the UFC and went on to defend the title for as much as six times.

Needless to say, she has inspired not only amateur female mixed martial artists but also a lot of females to pursue MMA under the UFC banner. However, her domain extends up to other females in the MMA community as well. One of them being longtime reporter Megan Olivi.

Olivi is an active part of the broadcasting team on Fox Sports 1. Olivi also hosts ‘UFC Ultimate Insider’ on Fox Sports 1 and has a series ‘The Exchange with Megan Olivi’ on UFC Fight Pass.

Three months ago, Rousey added another accolade on her resume by being inducted in the UFC Hall of Fame. Rousey also became the first women to be inducted in the Hall of Fame. A recent video on YouTube, showed Rousey getting prepared to attend the ceremony along with her husband UFC heavyweight Travis Browne. (via YouTube):

At the backstage, Rousey was congratulated by many people who have an integral part of the UFC like former middleweight champion Chris Weidman. An emotional Olivi hugged Rousey and thanked her for the opportunities she got due to Rousey.