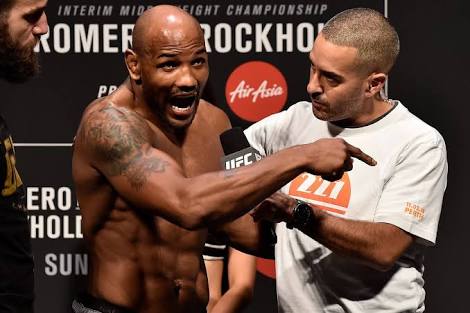 Yoel Romero – When I had a problem with USADA, Michael Bisping and Luke were the two guys talking a lot about me. Bisping is Bisping. I don’t have a relationship with him. But, with Luke, you talk like this about me?

Oh God. Maybe he’s thinking. This guy, 39 years old, minimum 2 years out. Bye bye Yoel. But, god is good every time and I am still here. Now, the UFC called me and I said yes for the fight. I wanted to push down my weight.

That is why in the weigh-in, I say, I am professional. I stay here for you. I coming for you because this is big opportunity. Everything happened because you talk so bad about me. You need to pay.

After the fight, I kissed him because he is Judas. I say to him, “Don’t forget, I love you.”

I will fight Robert Whittaker next. I don’t know when. I am waiting for him. I would love for it to be in Miami. That would be so big. It makes me happy. I would appreciate it if they made the fight happen there.

Tyron Woodley – Am I fighting Nate? Hmmm. Ask your boy. Ask Dana. I can’t say anything about fighting anybody because you all are getting mad at me.

I rectified things with Dana by letting him get it off, have his moment. I’ll most likely fight in July next. I’ll fight anybody next. I don’t give a fu*k. I’m tired. If you’re going to talk sh*t and you’re from another country, use google translate.

I injured my shoulder after throwing an overhand right against Demian Maia and my shoulder popped out. But, I kept fighting because I am a savage. I can’t lose this belt to anybody.

Once I finish work down here at welterweight and have wiped out the division, I will move up to middleweight. Right now, it is not a good time to fight at middleweight.  I was willing to go up to fight GSP and Bisping. But, otherwise, Robert is hurt. Yoel is hurt.

Matt Mitrione speaking to Ariel Helwani – I wanted to talk to you about the third round. When I am on the ground, I have an escape for the crucifix. I knew I was going to do this one move which I did.

If you watch the video on the internet and watch when there a minute and 54 seconds left in the third round, you will see me do a move. I bring my left heel across his right calf, squeeze my knees together and if I twist my hips hard enough, it becomes a sweep and I end up on top.

When I reached my leg across, I did not squeeze my knees hard enough. But, it was enough for Roy to know that he was going to lose his balance if I did it again. Once he got out of it, he took his right big toe, lifted his foot off the ground and stuck it in the cage.

For 40 seconds or so left in that round, when he was punching me and he had all of this leverage. So, for Roy to be all like, “I’m full of integrity”. For you to grandstand and claim that you don’t cheat or do steroids or anything else. But, you need to win. So, you decide to cheat in the final round just so you can win.

That is garbage. If you think that I am being a sore winner, go back and watch the film.

Kevin Lee – I am only 25 and I am just getting started in the game. I think that the sky is the limit. Losing the last fight was a blessing in disguise for me.

When you get to a certain level, every gym that you go into, guys get caught up in that and you quit learning. They stick to what they already know. They stop trying to do things just because they don’t want to lose. I am still in that learning phase.

I am rebuilding my camp after my coach passed away before I get another fight. I am working over at the performance institute but I am getting my old camp around me before I use the P.I. We are looking at May/June. My body is ready. I just have to structure my training camp. I am looking at some interesting fights.

The good thing is that I have a lot of options. Right now, I am looking at Barboza. He has fought a lot of guys at the top but I will whoop him harder than Khabib did. I will bust him up a little bit more. Eddie Alvarez is up there. He is trying to do the same thing by avoiding me.

There are a couple of fights that I am interested in. They are not all above me. Whatever number the sports writers give them, they still know that I am above them. When we step in the cage, those numbers don’t give a damn.

TJ Dillashaw speaking to Ariel Helwani – My goal is to fight Demetrious. That is what I am looking forward to. The UFC is telling me to get healthy. I am doing some physical therapy and working on staying healthy and getting ready. I am watching my body fat and trying to stay low.

They know that I want this fight. They know that DJ wants this fight. It’s definitely going to be on a big card coming up in July. They have got Stipe and Cormier as well. So, all of stars seem to be aligning.

It’s just a matter of when it will happen. My side has made clear about what I want. I think they are dealing with DJ’s management. If I can do it, I will fight at both 125 and 135. As long as I’m healthy, I will be active.

Michael Bisping on the Believe You Me Podcast – I actually had Yancy Medeiros. I thought he was going to win. I don’t know why. Donald Cerrone is by far has the better proven track record.

I guess that was my subconscious coming out because I did not want him to win so that he would not beat my win record. That was very selfish but it was a fun fight.

Both guys went forward. Cerrone got tagged a few times. Medeiros got hit with a big right hand and fell over. Cerrone followed it up. Very exciting and that son of a bi*ch tied my record for most wins in the UFC.

So, one more win and I can proclaim that I have had more fights than anybody in the UFC. For now, I am tied with him and GSP. I can still say that.

But the odds say that Donald Cerrone will have a couple of more fights.

Kenny Florian – Derrick Lewis is hilarious and has a right hand from hell. Every right hand he threw landed on Marcin Tybura. Tybura should have moved his head and feet. Tybura has a good kicking game but needs to work on his boxing big time.

Get out of the way when you face someone like Derrick Lewis. Derrick Lewis has to improve his wrestling and JiuJitsu. You cannot turn your back that many times and expect to get out of it. I am one of those people who would like to see him fight Francis Ngannou.

I don’t know how well he is on the ground. He has a Kimura win. But, he did not show those skills against Stipe. I think he will be willing to trade with anybody. Both of them are capable of knocking each other out. That fight makes a lot of sense.

Israel Adesanya – You will probably see me as champion next year. I keep getting the strong feeling that Robert and me will dominate the division.

There is a rumour that the UFC is coming back. I might have to headline that card. I don’t even want to be headliner. I like fighting late. It’s part of the gig. I enjoy the process.

The belt is just to gain more fame. But, more than that, I want to be the best fighter.

James Vick – Michael Chiesa beat me 6 years ago on the ultimate fighter. So, I have always wanted that rematch. I am not calling them out at random. They are ranked above me.

This is the second time Kevin Lee has turned down the fight. These dudes don’t want to fight me. There is always some excuse. The only way they will ever fight me is if the UFC forces them to.

Previous article
UFC: Mike Perry says that Colby Covington will try to ‘s**k his d**k for 15 minutes’ if they fought
Next article
UFC: UFC Welterweight Belal Muhammad takes exception to fighters mocking other fighters after a loss