UFC 235 took place at the T-Mobile Arena in Las Vegas with a stacked undercard and a terrific main event. The main event was headlined by UFC light heavyweight champion Jon Jones as he was defending it against Anthony ‘Lionheart’ Smith. Jones comfortably won the fight via unanimous decision as all the three judges had it 48-44 in the favour of Jones. In the last fourth round, two-points were deducted off Jones but illegal knee, but Smith refused to take a DQ win.

In the Co-main event, UFC welterweight champion Tyron Woodley took on the Nigerian nightmare Kamaru Usman. This fight was complete one-sided domination by Usman. He won the fight 50-44, 50-44, and 50-45 on the judges’ scorecard. With this win, Usman is now the new UFC welterweight champion and is on a 14-fight winning streak. He is 10-0 in the UFC. 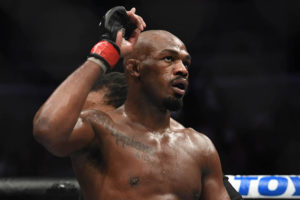 Further down on the card, Ben Askren made his UFC debut against Robbie Lawler. The fight started off wild in the opening round as Lawler picked Askren up in a clinch and slammed him down on the canvas and then he went on to pound on him with his elbows which cut opened Askren’s face. However, Askren was able to survive the initial assault by Lawler and caught him in a clinch and moved to the bulldog choke position. Referee Herb Dean getting no response from Lawler and seeing his left arm appear to go limp, he stopped the fight. But Lawler then immediately got up to protest the decision.

Then former UFC bantamweight champion Cody Garbrandt took on Pedro Munhoz on the opening Pay-per-view card. Both fighters engaged in a wild slugfest throwing hard shots back and forth. Then out of nowhere, Munhoz landed a huge counter right to the jaw of Cody and knocked him out. This is the third straight knockout loss for Cody Garbrandt.

Here are the best Twitter reaction to the UFC 235 card:

Some dude on Twitter told Cody Garbrandt 'I bet you're not man enough to drop your lead hand and rotate full-force into your opponent's power hook', and Cody Garbrandt has been trying to prove him wrong for three consecutive fights now.

Cody Garbrandt is the Amir Khan of MMA. #UFC235

Cody Garbrandt should have walked out to Oops I Did It Again by Brittany Spears. #UFC235

Man, whatever Cody Garbrandt has inside him that makes him a talented fighter, it's not just a gift, it's a curse. He just completely changed the direction of his career by going Rock 'Em Sock 'Em Robots with Munhoz and getting torched.

Well how much fun was that!

Ben Askren has won me over. the balls on that guy. to walk up to Robbie fucking Lawler wearing flip flops and look him in the eyes and tell him "ready to sprawl?" then get near murdered in 20 sec but comeback and win with the choke i use to put my little brother in. #UFC235

Controversy aside, Ben Askren is 34 years old and just made his UFC debut. This win over Robbie Lawler takes him to 19-0 in MMA. Let's not waste time. I'd book him on the Las Vegas PPV in July against the winner of Darren Till vs. Jorge Masvidal. That's the play. #UFC235

Herb Dean is very lucky that Robbie Lawler is that much of a class act, because his incompetence just robbed this man of a paycheck and a hell of an opportunity. That’s an inexcusable mistake by Herb Dean. Mistakes like these are becoming far too frequent from him. #UFC235

Going to the scorecards.

Kamaru Usman is about to become the first African-born champion in UFC history.

"I want you to remember this day forever. Daddy did it."

You wouldn’t believe it, as Kamaru Usman was giving his passionate speech and dedicating it to his daughter, somebody snuck up on me with a bag of half cut onions and threw them in my eyes. Crazy. 😭 #UFC235 https://t.co/ftERWjuoZC

Kamaru Usman is beating the shit out of Tyron Woodley. Unbelievable. #UFC235

Tyron Woodley: "It felt like a bad dream" – on his loss to the "Nigerian Nightmare" Kamaru Usman. #UFC235

Tyron Woodley says he wants an immediate rematch with Kamaru Usman. Given his relationship with UFC over the years, gonna be an interesting story to follow. #UFC235

That was Spectacular, @JonnyBones! #UFC235

GOAT!!! Huge congrats @JonnyBones What a masterclass that was #ufc235

Jon Jones ties Anderson Silva for most consecutive fights in UFC history without a loss (16). #UFC235