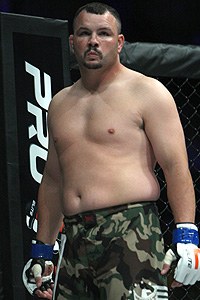 The fight card of Colosseum Combat 45 in Kokomo, Ind boasted many great fights. However, one particular fight between two veteran heavyweights for the promotion’s heavyweight title has now grabbed all the headlines. During the bout Jonathan Ivery faked an injury after being hit by a body kick by Travis Fulton. Ivery then came out all guns blazing with a flurry of big punches and dropped Fulton. He then began to ground and pound his way to a likely stoppage victory but instead got up and tapped, making Fulton the unlikely victor. 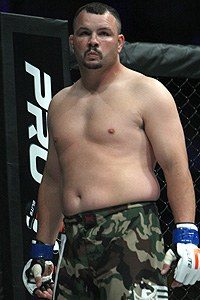 Ivery is apparently a huge admirer and fan of Fulton and even idolises the former UFC fighter. Thus, even though he tried to cause a distraction by faking a heart attack, he still did not want to keep punching his idol and thus quit.

Below is the video of the entire incident:

So to recap.. Johnathan Ivey fakes a heart attack, drops Travis Fulton, proceeds to follow up with GNP… then decides he can't punch his idol in the face anymore and taps out. #mmathings pic.twitter.com/grK54YhOe0

Previous articleUFC: Israel Adesanya says he does not want to be ‘babied’ all the way to the top
Next articleUFC: David Branch hilariously calls-out Ronaldo ‘Jacare’ Souza by eating alligator meat