MVP says next opponent Richard Kiely is a ‘joke’ 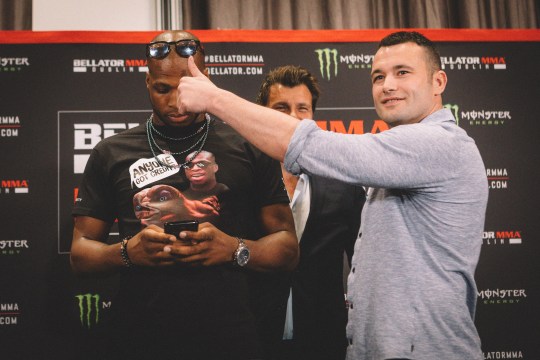 Everything was not cool at the Bellator press conference between Michael Venom Page and Richard Kiely.

The two got into a bit of a physical altercation at the press conference yesterday and had to be separated. While MVP looks to make a return in the win column after his defeat, he said that he is treating his next opponent as a joke.

While talking to MMA Fighting Page said, “I see him as a joke, full stop. His whole career in MMA seems funny to me. He’s already retired and come back. Everything about him as a fighter is a joke and everything he does on stage shows that.”

MVP, in his previous fight, got knocked out by Douglas Lima in the semifinal of the Bellator Welterweight Grand Prix. Kiely marks a significant decline in competition for him. And that is why he will look to make short work of him, while gaining necessary momentum to carry forward.

.@Michaelpage247 is not taking Richard Kiely "seriously" ahead of #BellatorDublin:

"Everything about him as a fighter is a joke."

Michael seemed very positive about the response he gave to the media when asked if he was seeing the fight as a showcase event.

“Oh 100% percent. I am just happy that I get to do it in Dublin. And I am coming back off a loss myself. I will be good to make some serious noise and then get back to business. I’m obviously training for the fight and trying to make weight. But I am not taking him seriously enough to analyse him in any shape or way.”

Kiely has a mild 3-1 mixed martial arts record. He trains alongside Conor McGregor at SBG Ireland. Bellator Dublin will take place later this year on Sept. 27 at 3Arena. The event will be headlined by a featherweight bout between James Gallagher and Cal Ellenor.