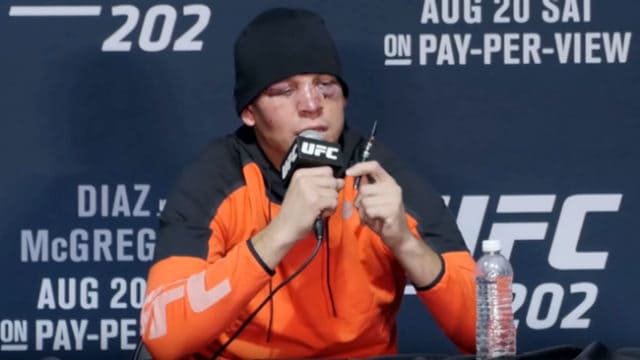 Nate Diaz’s official clothing partner Represent LTD has announced on its Instagram that the Stockton superstar will be hosting a special press conference at the Orpheum Theatre in LA at 1:30 PM PT on Saturday ( 2 Am IST Sunday)

Nate, who was unhappy at the UFC for not giving him big payday after the McGregor fight, acquiesced to Dana Whites demands and showed up at the UFC presser yesterday where It was announced that he will face the #3 ranked Dustin Poirier at UFC 230 in Madison Square Garden.

However, Diaz staged a walk-off in the press conference when the promo aired confirming the return of ‘The Notorious’ Conor McGregor to take on current UFC lightweight champion Khabib Nurmagomedov at UFC 229 in October. He had also stated via Twitter that he is not interested in fighting unless the fight is under the McGregor card.

I’m not fighting on that show fuk the @ufc

The future of the highly anticipated comeback fight is in jeopardy after Diaz expressed his discontent. The press conference hosted by the Stockton squad will hopefully shed some light into the situation.

Previous article
UFC: Nate Diaz says he won’t fight ‘on that show’ after McGregor’s addition to UFC 229, storms off the conference room during the promo
Next article
UFC 227 Dillshaw vs. Garbrant 2: Play by Play Updates & Live Results