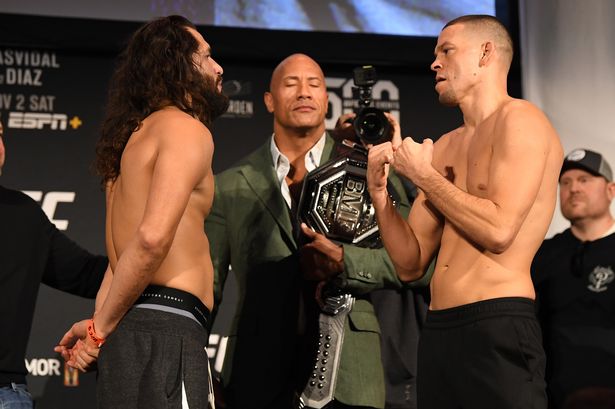 UFC 244 is finally in the books now and it has most definitely made a compelling argument to be the greatest UFC fight card of all time (alongside UFC 205, UFC 217 and UFC 189). The main event for the BMF belt between welterweights Nate Diaz and Jorge Masvidal also delivered just as expected. In the main event, Masvidal defeated Diaz via TKO due to a doctor’s stoppage and was given the belt by Dwayne “The Rock” Johnson. Diaz was visibly irked by The Rock siding with Masvidal and let his anger out on his during the post-event press conference. 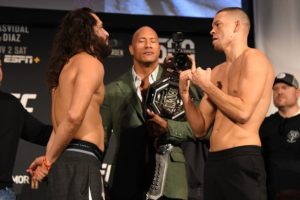 Diaz told reporters that Mike Tyson should have handed out the belt because he is the Baddest Man on the Planet while telling The Rock that “he can get it too”. Here’s what he had to say:

F**k The Rock too man. That motherf**ker over here playing me. I see him all over smiling with Masvidal. Should have had Mike Tyson hand out the belt if anybody. I don’t give a f**k about any belt anyway but he can get it too. He on the wrong side. F**k him. I’m on the west coast. Mike Tyson should have been here anyway, he is the Baddest Man on the Planet right?

You guys caught me at the wrong time, The Rock’s cool. I like Ballers (The Rock’s comedy sitcom about American Football). But he picked the wrong side.

Previous articleJohnny Walker reacts to tough Corey Anderson loss: ‘Never a defeat. Always a lesson!’
Next articleUFC: Jorge Masvidal takes offense at suggestion that he may have gassed in championship rounds: ‘I’m not McTapper!’