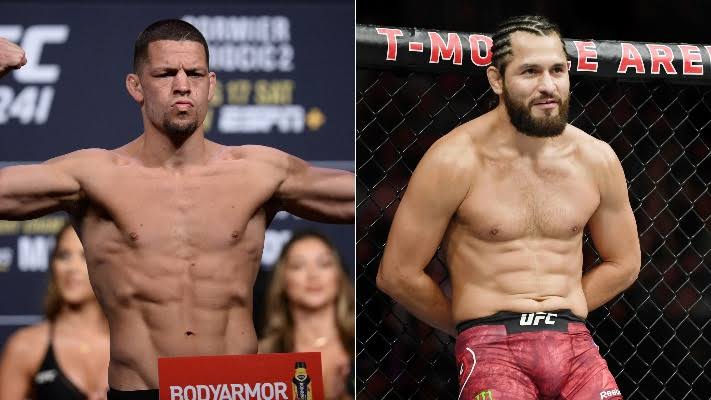 Nate Diaz said that he will no longer be fighting for the BMF title against Jorge Masvidal at UFC 244 which was scheduled to take place at the Madison Square Garden Arena in New York on November 3.

Diaz wrote that he tested for positive for elevated levels of a substance, he believes came from a tainted supplement. Diaz didn’t specify as to what the substance was. Nate broke the news on Twitter.

Your all on steroids not me pic.twitter.com/ykrZmRIoPS

“I’m not gonna make it out to NYC for fight week next week because they say I tested with elevated levels that they say might be from some tainted supplements.” Nate Diaz explained. “I call false on that cause I only take Whole Food or natural food supplements. I don’t even eat meat!”

“So unit UFC, USADA or whoever is FUCKING with me fixes it, I won’t be competing. I’m not gonna play their game and try and hit it or keep quiet, as they suggested. I’m not going to have my name tainted as a cheater like these other motherfuckers who keep quiet until after the fight so they can get paid. Fuck*n cheaters.

“I don’t give a f*ck about some money over my dignity and my legacy.” Nate Diaz stated. “I’m not staying quiet and figuring it out after the fight. That’s cheating. So fight game, I’ll see you when I see you. The realest baddest mother f&cker in the game.”

Meanwhile his opponent Jorge Masvidal has come out in support of Nate Diaz and said that he was one of the cleanest person in the fight game.

You not the baddest mofo in the game (i am) but you are one of the cleanest mofo’s @NateDiaz209 I’ll see you nov 2. I know your name is clean. I don’t need @usantidoping to tell me shit!

It’s unclear as to if the fight would go ahead as planned. Although UFC has Leon Edwards on standby if things don’t go as planned on November 3.

Previous articleUFC: Platinum Mike Perry says Robbie Lawler doesn’t want to fight him
Next articleMMA fans are mad that Nate Diaz is pulling out of the fight, here are the top reactions