Nate Diaz takes a shot at Khabib, Conor McGregor and Sambo all in one social media post 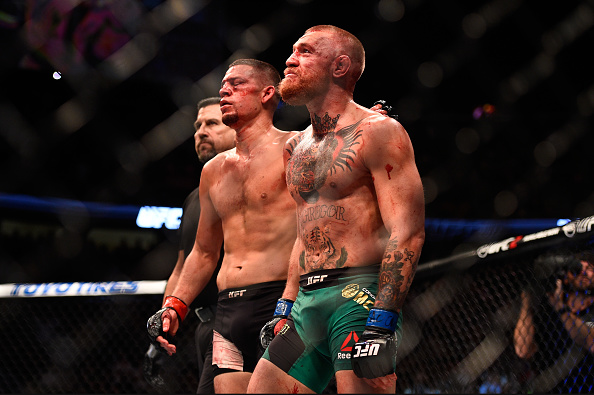 Nate Diaz rarely holds anything back when he goes for his opponents. Never one to mince words, Nate Diaz has now taken on three giant forces with one tweet. In his latest tweets, Nate Diaz posted a picture from the time he had defeated Conor McGregor. The tweet is clearly directed at three forces, and if it was not clear, Diaz further cleared it up in later tweets.

In his tweet, he posted a blurry picture of Conor McGregor after he had left him lying in the Octagon after making him tap out in their first fight. On McGregor’s torso, he put the Russian flag and the text of Sambo. On his own image, he posted the United States flag.

The tweet was directed at McGregor, Khabib Nurmagomedov, and Sambo all in one. Khabib is a practitioner of Sambo and has competed in tournaments.

In later tweets, Diaz continued to make clear who he was targeting. He said that McGregor was acting like he was back, but actually, he was dead. He went on to say that the reason he was not fighting at present was that UFC was shelving him so that McGregor could fight him. Diaz said that he wanted to fight Khabib, but apparently, the UFC Lightweight Champion was hiding from him.

You acting like you came back ☘️
in real life your dead 💀

At the moment, neither Khabib nor McGregor have their next fights decided. Nate Diaz could realistically be the next opponent that McGregor has been looking for.