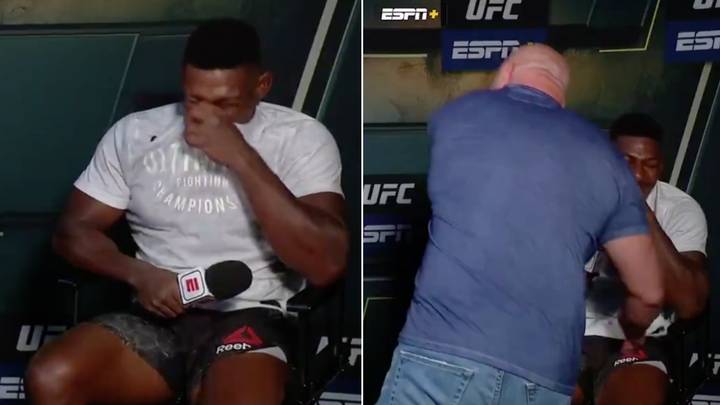 ‘New Mansa’ produced what many are deeming to be the greatest knockout in UFC history when he put Impa Kasanganay on the canvas with an insane spinning back kick in their middleweight bout on the preliminary fights.

Joaquin Buckley stole the show at UFC Fight Island 5. The card was stacked with some incredible fights and featured some incredible knockouts courtesy of Sandhagen, Du Plessis, Aspinall, Breese, Daukaus. On any other night, the aforementioned fighters could’ve made a strong case for knockout of the night.

However, ‘New Mansa‘ stole the show with his ‘Wakanda Style’ Knockout. He made a strong case for not only knockout of the night, but knockout of the year after stopping the undefeated Impa Kasanganay.

While doing his post-fight interviews, ‘New Mensa’ was greeted by UFC President Dana White. It has not been the easiest of starts in the UFC for him as he succumbed to a loss to Kevin Holland on his debut. However, he could not have bounced back in a more impressive manner than he did at UFC Fight Night: Moraes vs Sandhagen.

During the post fight interview, Dana White approached ‘New Mansa’ and said the following: “So I always talk about you know, when you’re on a card right. How do you stand out? My phone is blowing up…. Everyone is saying just give him $200,000 tonight, give him every bonus. Nobody has ever seen anything like that. Sean Shelby sent me a text saying write him a check for $50,000 and go give it to him before he gets out of the octagon. Incredible!”

Buckley is a former Bellator MMA fighter. Following his last loss in the promotion against Logan Storley, they released him. ‘New Mensa’ then joined LFA, where he secured two stoppage wins. In August this year, he made his UFC debut. Despite doing well in the first two rounds, he got knocked out in the third round and would have wanted to put that setback far behind.

‘New Mansa’ did just that and ended Impa Kasanganay’s eight-fight win streak. The middleweight division is one of the most talent stacked divisions in the UFC. Hence, the addition of an exciting prospect will make things even more interesting; especially if he pulls off more finishes like the one he did on Fight Island.

Previous articleNate Diaz hints at possible match against Dan Hooker after posting a cryptic video
Next articleMike Perry to Darren Till: ‘I will ruin your life’