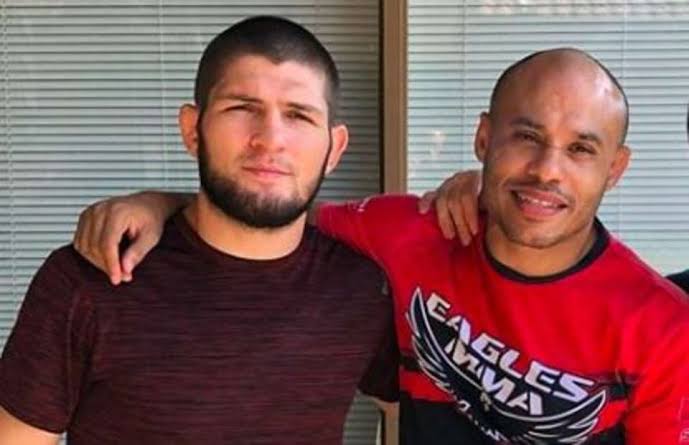 The UFC has just finalized the paper work for Khabib Nurmagomedov’s title defense against interim champ Dustin Poirier. For the fight to be signed, a new deal had to be inked for the Dagestani champ.

His earlier deal only had one fight left on it. According to Khabib’s manager, Ali Abdelaziz, the new deal has now landed him on the top of UFC’ s earning food chain.

“We’re extremely happy,” Nurmagomedov’s manager Ali Abdel-Aziz said about the new contract when speaking to MMAFighting on Tuesday. “We’re well taken care of. We can’t ask for any better. We very grateful. Easiest negotiation I ever did. It was fair, straight to the point. This is one of the biggest deals in UFC history. I don’t care Conor [McGregor], I don’t care this is one of the biggest guaranteed money [contracts] in UFC history. When you do this kind of deal, people normally burn bridges. The bridges only got stronger, that’s all I’m going to say.

“The UFC stepped up. They give us what we want and they made a good business decision on their behalf and they made us a partner. We are all partners. We are in it together on this.”

Khabib will fight Poirier on Sept. 7 at UFC 242 in Abu Dhabi. He will be looking to maintain his unblemished record of 27-0. Given his dominance inside the Octagon, Abdelaziz was sure that UFC would give his client a new contract.

“My opinion right now, Khabib is the pound-for-pound greatest fighter we’ve ever seen,” Abdel-Aziz stated. “He never lost. He’s never been caught. He’s never been dropped. He’s dominated every round against almost every opponent. No [performance-enhancing drugs], nothing.

As the month of Ramadan has come to a close, its still unclear when Khabib will return to US to start his fight camp. The  fight taking place in Abu Dhabi has raised the spirits of the champ as he will be joined by his cousin Abubakar Nurmagomedov and Zubaira Tukhugov.

“The is like a prince getting to show off all of his skills in front of his own people. This is coming home,” Abdel-Aziz said about the fight happening in Abu Dhabi. “This is the people who have been supporting him, the whole entire Middle East, the whole north of Africa, 1.5 billion Muslims and the UFC did the right decision. They know he is the biggest draw right now in the Muslim world and Dana White an entrepreneur. Dana White is the biggest promoter in combat [sports] history. This is who he is and he made a very good business decision.

“They kept their word. They got Abubakar [Nurmagomedov] and Zubaira [Tukhugov] a fight on the same card as Khabib. They re-signed Zubaira to the UFC. Everything they said, they delivered. We have to deliver, too, that’s it.”

Another inspiration for Khabib will be the presence of his father in his corner. Visa issues have prevented him from cornering his son for the last few fights.