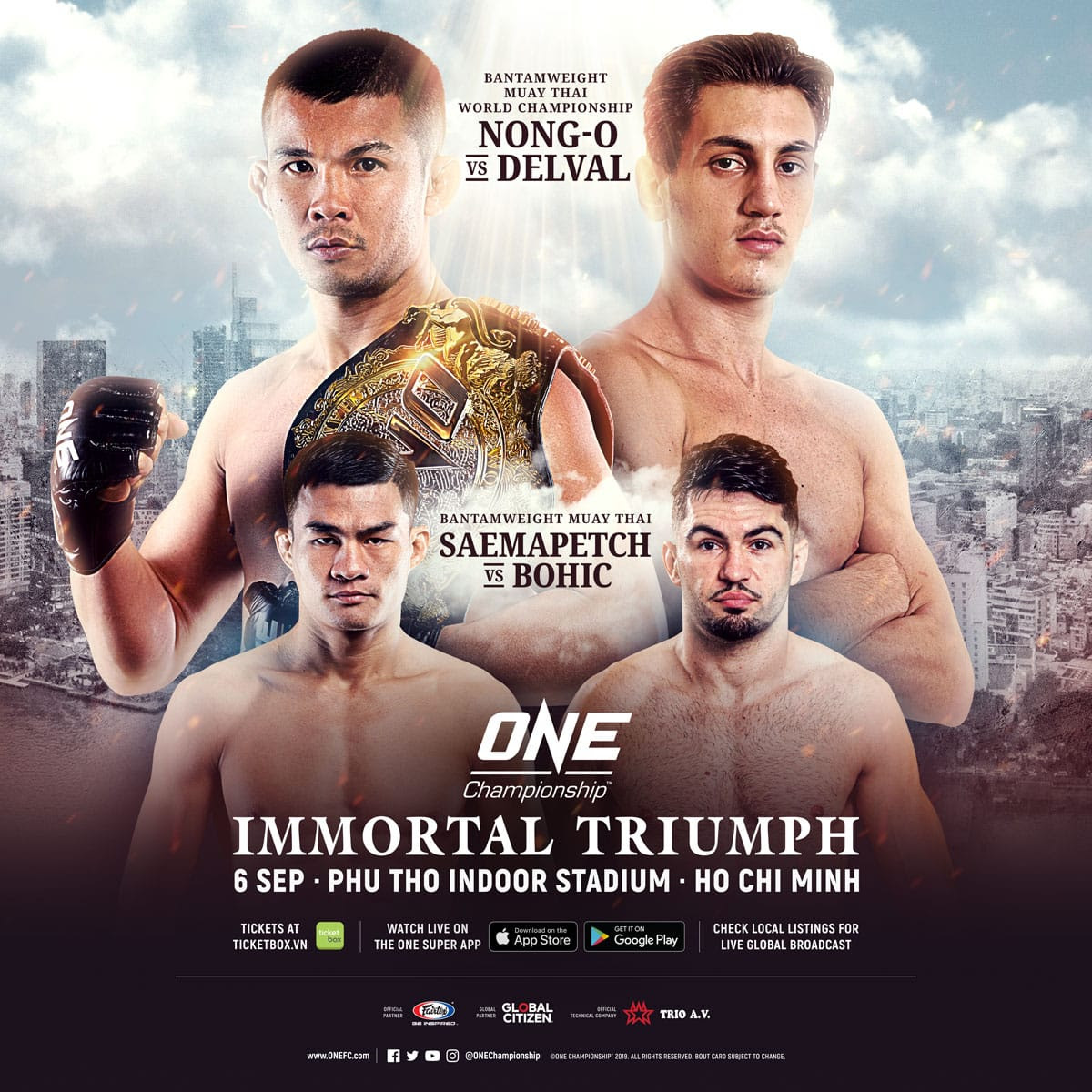 The largest global sports media property in Asian history, ONE Championship™ (ONE), has just announced its historic first event to be held in Vietnam. Live from Ho Chi Minh City is ONE: IMMORTAL TRIUMPH, featuring the absolute best in world-class martial arts talent. The greatest strikers from all corners of the globe are set to converge at the Phu Tho Indoor Stadium for an action-packed evening. ONE: IMMORTAL TRIUMPH is also the first event to feature all ONE Super Series bouts.

In the main event, reigning ONE Bantamweight Muay Thai World Champion Nong-O Gaiyanghadao of Thailand will defend his title against Brice Delval of France.

Ticket information for ONE: IMMORTAL TRIUMPH is available at www.onefc.com and https://ticketbox.vn/event/immortal-triumph-76580.

Since joining the world’s best strikers in ONE Super Series, Nong-O has dominated the competition. In February, he captured the inaugural ONE Bantamweight Muay Thai World Title with a unanimous decision victory over Han Zi Hao. He then successfully defended the belt in his next bout against Hiroaki Suzuki.

Nong-O’s opponent, striking sensation Brice Delval, is a natural talent who trains at the famed Mahmoudi Gym in France.

Delval grew up on the French island of Réunion, where he discovered his passion for martial arts. That ultimately led him to the sport of Muay Thai.

One of the fastest rising stars today, the 20-year-old Delval now joins ONE Super Series. In his official debut, he will challenge Nong-O for the ONE Bantamweight Muay Thai World Title.

Rising star Saemapetch Fairtex of Thailand returns to action in a Muay Thai contest. The former MTGP Welterweight World Champion joined ONE Super Series in 2018 and has since impressed during his time inside the ring.

Prodigiously talented, Saemapetch took up Muay Thai at the age of 11, and a mere three years later, he was already competing at the famed Rajadamnern Stadium in Bangkok. Now training out of the renowned Fairtex camp in Pattaya, alongside the likes of Muay Thai World Champions Yodsanklai IWE Fairtex and Stamp Fairtex, Saemapetch is certainly a noteworthy talent to watch out for.

Also on the card is Thanonchai SomawangGaiyang of Thailand who takes on WBC Muay Thai International Champion Kohei “Momotaro” Kodera of Japan in a Muay Thai contest, while Lumpinee and Rajadamnern Stadium Champion Panpayak Jitmuangnon of Thailand takes on RISE Featherweight Champion Masahide “Crazy Rabbit” Kudo of Japan in a kickboxing contest.

Vietnamese-British athlete Michael Pham and the United Kingdom’s Amber Kitchen are set to see action as they face Mohamad Fakri Bin Yusoff of Malaysia and Viktoria Lipianska of Slovakia respectively in a pair of Muay Thai bouts.

Vietnamese martial arts athletes will of course be well-represented in ONE Championship’s inaugural event in the country.

Additional bouts for ONE: IMMORTAL TRIUMPH will be announced at a later date.