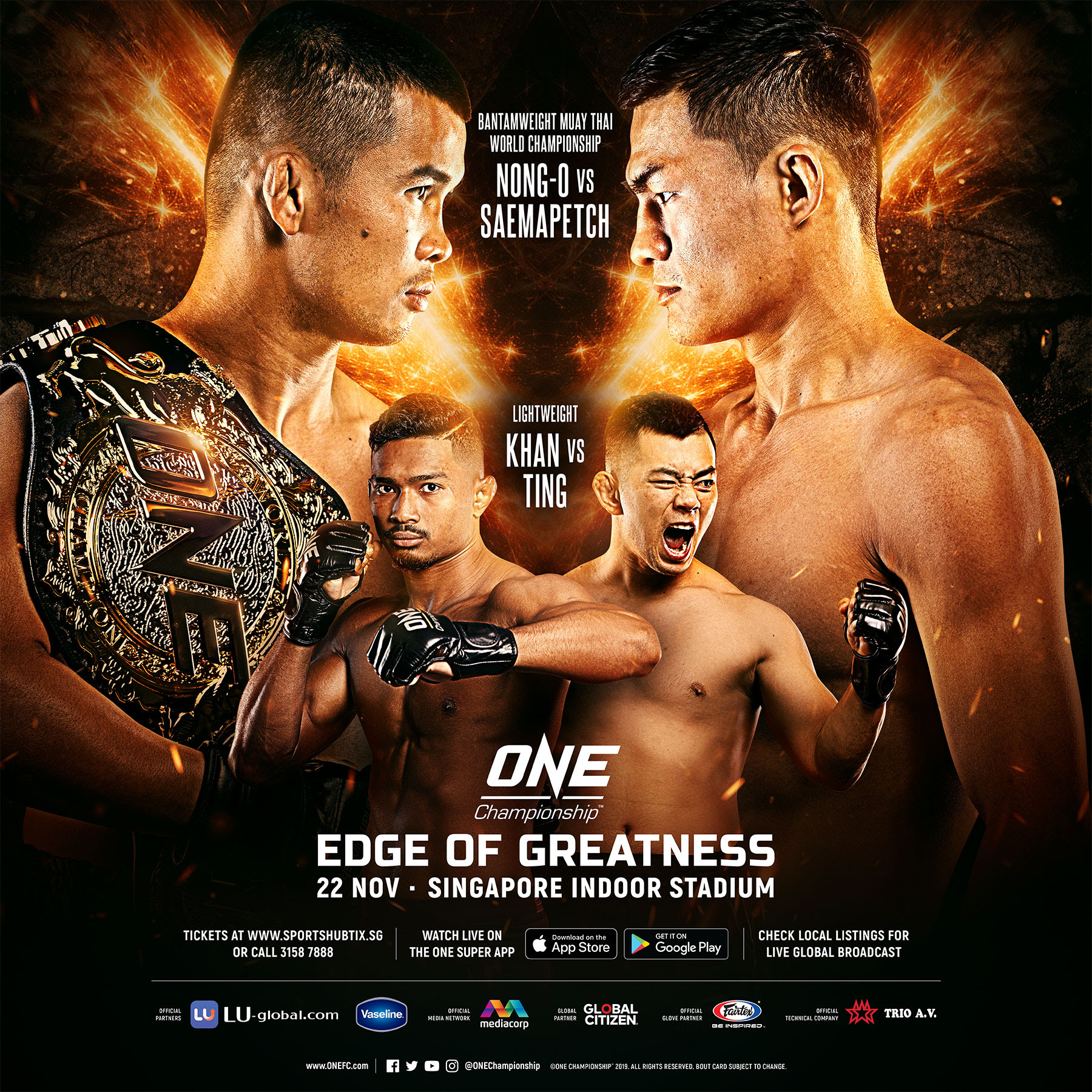 AMIR KHAN TAKES ON EV TING IN CO-MAIN EVENT OF ONE: EDGE OF GREATNESS

The largest global sports media property in Asian history, ONE Championship™ (ONE), has just announced its return home to Singapore for ONE: EDGE OF GREATNESS. On Friday, 22 November, the Singapore Indoor Stadium will once again play host to the world’s greatest martial arts athletes. In the main event, reigning ONE Bantamweight Muay Thai World Champion Nong-O Gaiyanghadao of Thailand will defend his World Title against countryman Saemapetch Fairtex.

Since joining the world’s best strikers in ONE Super Series, Nong-O has dominated the competition. In February, he captured the inaugural ONE Bantamweight Muay Thai World Title with a unanimous decision victory over Han Zi Hao. He has since successfully defended his belt

Nong-O’s next opponent is countryman Saemapetch, one of the fastest rising stars in Thailand.

The former MTGP Welterweight World Champion joined ONE Super Series in 2018 and has since impressed during his time inside the ring.

Prodigiously talented, Saemapetch took up Muay Thai at the age of 11, and a mere three years later, he was competing at the famed Rajadamnern Stadium in Bangkok. Now training out of the renowned Fairtex camp in Pattaya, alongside the likes of Muay Thai World Champions Yodsanklai IWE Fairtex and Stamp Fairtex, Saemapetch is certainly a noteworthy talent to watch out for.

In the co-main event of the evening, former ONE World Title challengers Amir Khan of Singapore and Ev “E.T.” Ting of Malaysia will do battle in a lightweight mixed martial arts contest.

Ting, on the other hand, is coming off a spectacular come-from-behind victory against Daichi Abe last July. The Malaysian-Kiwi sensation, who is one of the world’s best lightweights, blazed a trail across Asia, New Zealand, and Australia before making waves on the global stage of ONE Championship.

Originally born in Malaysia, Ting was once a promising soccer player in school. But in 2009, he decided to switch his focus to mixed martial arts and began training at a local gym in Auckland. He made his professional debut in 2011, and has since defeated proven contenders such as former ONE Welterweight World Champion Nobutatsu Suzuki, Ariel Sexton, and Kamal Shalorus.

The rest of the card is stacked with even more world-class martial artists and local talent.

Singaporean star Tiffany Teo is set to make her ONE Championship return against promotional newcomer Maira Mazar of Brazil.

Teo is one of the fastest rising stars in Asia. She began her training in taekwondo, and then later moved on to compete in Muay Thai, boxing, and finally, mixed martial arts. The former ONE Women’s Strawweight World Title challenger now welcomes Mazar to the Circle. The Brazilian is riding a two-bout win streak, and she would love to extend it to three in her ONE Championship debut.

Worthen, who trains out of Evolve in Singapore, is a former NCWA Conference Champion and All-American with over 400 career wrestling matches under his belt. He made his mixed martial arts debut in 2015 and has since won all five of his bouts. He signed with ONE Championship last July and debuted with a second-round technical knockout victory over Chen Rui.

His opponent, the hard-hitting “Rock Man,” is a Shanghai Open BJJ Champion known for his fast and powerful hands. Chen started his ONE Championship career finishing his first four opponents in spectacular fashion.

Former ONE Strawweight World Champion Alex “Little Rock” Silva of Brazil is set to take on China’s Peng Xue Wen in a strawweight contest. Silva, a mainstay at Evolve in Singapore, is fresh off an impressive second-round submission victory over Stefer Rahardian. Peng, on the other hand, is a winner of two of his last three bouts.

In addition to that, Singapore-based Indian martial artist Rahul “The Kerala Krusher” Raju will face Pakistan’s Ahmed “The Wolverine” Mujtaba.

More bouts for ONE: EDGE OF GREATNESS will be announced at a later date.

ONE Championship also announced a partnership with HotelPlanner, a leading provider of online solutions and services to the global hotel sales market.

Hua Fung Teh, Group President of ONE Championship, stated: “It is my pleasure to announce that ONE Championship has teamed up with HotelPlanner as our hotel booking partner. Hospitality plays a major role in everything we do here at ONE. Operations rely heavily on hotels in all our events in Asia and around the world – from the athletes, to the staff, to senior leadership. This partnership helps us build a stronger, more efficient bridge between hospitality and sports entertainment through HotelPlanner’s automated platform. We look forward to a strong and fruitful partnership, one that will drive both organizations forward into the future.”