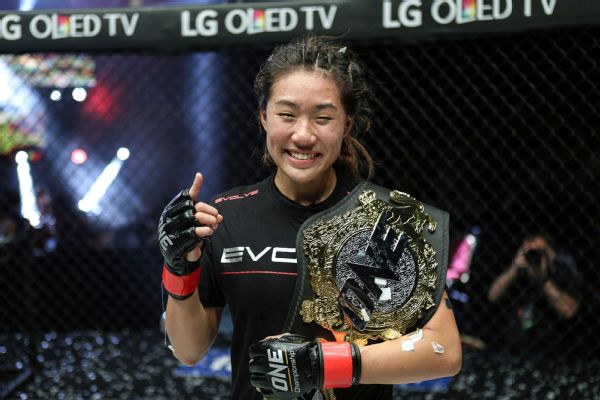 A fight between ONE FC atomweight champion Angela Lee and undefeated Dennis Zamboanga has always been discussed amongst the MMA community.

However, that took a backseat as champ Lee took to social media revealing that she was three months pregnant. The pregnancy will obviously delay her timeline all the way to late 2021. 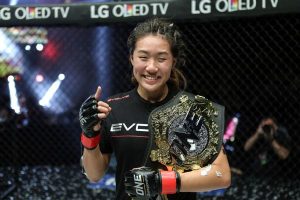 That obviously did not go well with Zamboanga who took to social media with a variety of tweets demanding Lee to be stripped off her belt. There was a lot of confusion around this issue.

ONE FC CEO and chairman Chatri Sityodtong took to social media with a heartfelt message to clear the air. He generously assured that Lee won’t be stripped or asked to vacate her title. Instead, he announced an eight-women atomweight championship Grand Prix tournament. The winner will then fight Lee for the belt. (via Facebook):

“ONE Atomweight World Champion Angela Lee will not be stripped of her title and/or be asked to vacate. ONE Championship has never stripped anyone of his/her world championship title. For me, there are only a few reasons that an athlete should be stripped and/or be asked to vacate his/her world title: cheating, unwillingness to defend the title, criminal activity, or retirement. Any other reason would be unfathomable. It is not right to take away someone’s greatest achievement earned through a lifetime of sacrifice and hard work.”
“I have no doubt that Denice Zamboanga will face Angela Lee in the future. I am a big Denice fan. She is a young rising star with so much potential. I love her aggressive style and her big heart. In fact, she would be one of my favorites to win the ONE Atomweight World Grand Prix Championship. If she wins it, Denice will have the rare opportunity to become the first female in history to hold both titles (if she ends up beating Angela too). If anything, winning the ultra-prestigious ONE Atomweight World Grand Prix Championship would establish Denice as one of the best pound-for-pound female athletes in the world and erase her current status as a young rising star. That being said, I would not count out the other 7 athletes invited to compete in the tournament. Bar none, it will be the most elite atomweight world Grand Prix in the history of martial arts. I will be announcing shortly the 8 superstar female athletes invited from around the world to compete in the ONE Atomweight World Grand Prix Championship. And yes, Angela has already made plans to defend her title against the winner next year.”

Lee responds to the classy message!

Sityodtong’s words obviously had Lee extremely overwhelmed of her comeback in late 2021. ONE FC has always idolized the spirit of martial arts! (via Twitter):

To have a leader who speaks like this about his fighters and champions, who does not put women down but lifts them up them and praises them for their capabilities, values and accomplishments… You will not find this any where else in the world.

Lee was the first-ever female ONE champion. She has been undefeated in the atomweight division and has defended her belt for four times since 2016.