One billion strong – The long, arduous journey ahead of Arjan Singh Bhullar 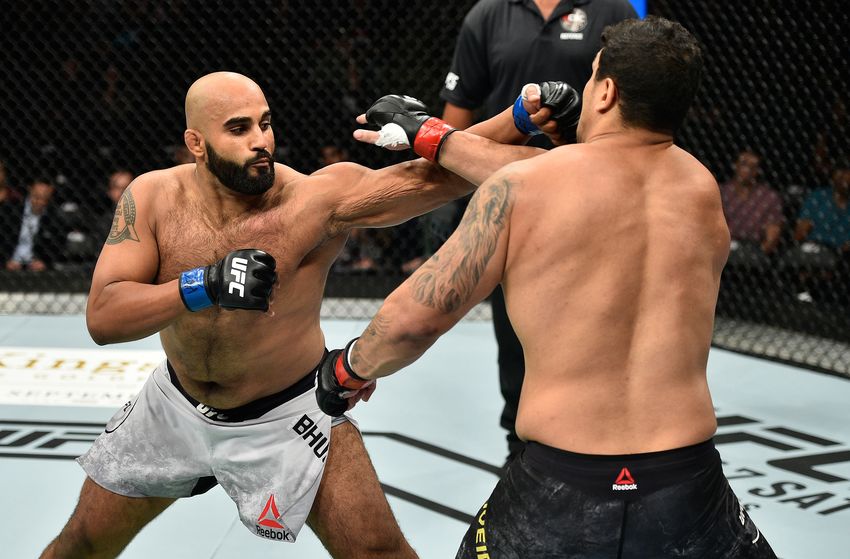 In our quest to find the key, that would unlock the true potential of mixed martial arts in India, we might have taken the most significant step yet. During the UFC 215 weigh – ins, the tricolours of the Indian flag flashed on the screens of hundreds of thousands of fans, as Joe Rogan introduced the Canadian heavyweight of Indian descent, Arjan Bhullar.

In many ways, the moment captured the hopes and dreams of over a billion people. We Indians are a prideful bunch; yet, for the longest time, we haven’t had a representative in the leading mixed martial arts organisation in the world. The phrase “fastest growing sport” is blasé in the world of MMA, but in India, one cannot help but agree that the sport has been moving at a snail’s pace.

Every fighter from India, regardless of where they have – or are competing, harbours the dream of one day competing under the bright lights of the Ultimate Fighting Championship. More than the allure of a substantial pay raise, it has been about earning the bragging rights – to be the first, in a country of over billion people.

Early days for Arjan, and the importance of being pragmatic

With great power comes great responsibility. When Arjan Singh Bhullar announced that he had signed a contract with the UFC, the Indian subcontinent rejoiced unequivocally. Years after UFC almost entered the Indian market, only to pull the plug due to undisclosed reasons, this presented India’s best chance to lure the global juggernaut to the country.

One would be hard pressed to find another fighter that has the opportunity to do what Arjan does – revolutionise the sport in a country, which boasts of raw, untapped potential, only to be withering away in the bowels of mediocrity. On the face of it, Arjan Singh Bhullar could do what Vijender Singh did for boxing in India – inspire a generation of up – and – coming fighters.

However, the fact that the task is much more arduous wouldn’t be lost on the heavyweight, who made his UFC debut at UFC 215. Unlike boxing, there are major hurdles that the MMA fighters in India must overcome. The fact that MMA is not officially recognised as a sport in India would exemplify the long road ahead for the former Olympian. While optimism is a good sentiment to carry into the future, the perils of deification, especially at this stage, cannot be understated.

It is imperative for the fans to remain pragmatic. While it is true that Arjan trains with some of the best heavyweights and light heavyweights in the world, he, just like every other fighter, needs time to evolve into a world beater. The competition, as one would expect, is fierce in the UFC. Unlike other global promotions, where there is an opportunity to “protect” fighters from tough opposition, there is no hiding space in the leading MMA promotion on the planet.

Perhaps, the comparison apropos to what we can expect from Arjan, would be the weight of the world Narain Karthikeyan had to carry, when he first broke through the ranks. Becoming the “first” in anything can be a daunting proposition; not only are you expected to lead by example, but it is also plausible to be the subject of unrealistic expectations – something the sportsmen often try to avoid.

Sparring with the likes of Daniel Cormier and Cain Velasquez undoubtedly gives Arjan a head start, and perhaps, he is better equipped training at the American Kickboxing Academy than any other gym in the world. However, getting into the UFC would be the easy part, in the long, arduous journey Arjan has embarked on, in his quest to become a world champion.

From his words, it is quite clear that surviving in the UFC isn’t what Arjan Bhullar is aiming for. With his extensive background in wrestling, and the ease with which he has been able to foray into the world of mixed martial arts, the future looks bright for Arjan Bhullar. However, his real test lies ahead, as the road to the top will only get bumpier.

Learnings from the Luis Henrique fight

What Arjan did well

Against Luis Henrique, who at 24 years old, has fought the likes of Tybura and Francis Ngannou, Arjan’s game plan was faultless in the first two rounds. The fact that Luis, who usually doesn’t tailor his fight camp according to the strengths and weaknesses of his opponents, studied Arjan Bhullar, and prepared a game plan, provided the first real test – and the opportunity to scout Bhullar’s temperament.

Henrique shifted weight onto his back foot, often waiting for Arjan to change levels and use his wrestling to subdue Henrique. The fact that he cocked his fist, looking for the overhand right meant that Arjan couldn’t afford to drop his guard. However, Arjan passed his first test with flying colours.

With excellent head movement, constantly moving in the cage and with his guard up, Arjan Singh Bhullar knew what Henrique was looking for. Arjan didn’t do anything wrong in the first two rounds – dropping Henrique with a hook, and putting pressure on Luis with the take down, using his wrestling to secure the top position in the half guard, Arjan showed great composure. But the hook did not come out of thin air.

Bhullar kept working with his jabs, sticking and immediately moving his head away from the centre line, frustrating Henrique. However, Luis started exploiting holes in Arjan’s game as the fight went into the last round.

What Bhullar needs to work on

At the outset, this was not a typical Luis Henrique performance, and understandably so. Henrique has been known to be aggressive, pushing the pace in the initial two rounds, only to start fading deep into the second – and the third rounds. Henrique understood that, given Arjan’s wrestling background, he would try to go for take downs, and would want to suffocate him from the top position – something we’ve seen other AKA fighters such as Khabib Nurmagomedov do with precision.

This meant that Henrique would be conservative with his output, and would try to keep his distance from Bhullar. In the second and third rounds, Henrique used body kicks to good measure, but that paid dividends largely in the final round of the scrap. With Arjan slowing down considerably, it opened the door for Henrique to be explosive, as he started connecting with combinations in the clinch.

In the final 90 seconds, Henrique once again used his leg kicks to set up his combinations, as a visibly tired Bhullar tried circling away from Henrique’s power right. However, as Arjan starts climbing the ladder, facing sterner competition, that is a luxury he wouldn’t be afforded. While it isn’t atypical for the heavyweights to start fading in the penultimate and final rounds, Arjan needs to pace himself carefully.

Cardio and conditioning is often the most underrated aspect of MMA, but can define the outcome of a fight. As the likes of Overeem could attest to, it can be your biggest asset, or your greatest weakness.

The next year or two will be fascinating, to see the evolution and growth of Arjan Bhullar in the UFC. At the same time, it is important to exercise caution, and remember that Rome wasn’t built in a day. If Arjan keeps improving at a rapid pace as he is now, India might soon have its very own Irish revolution in the Ultimate Fighting Championship.