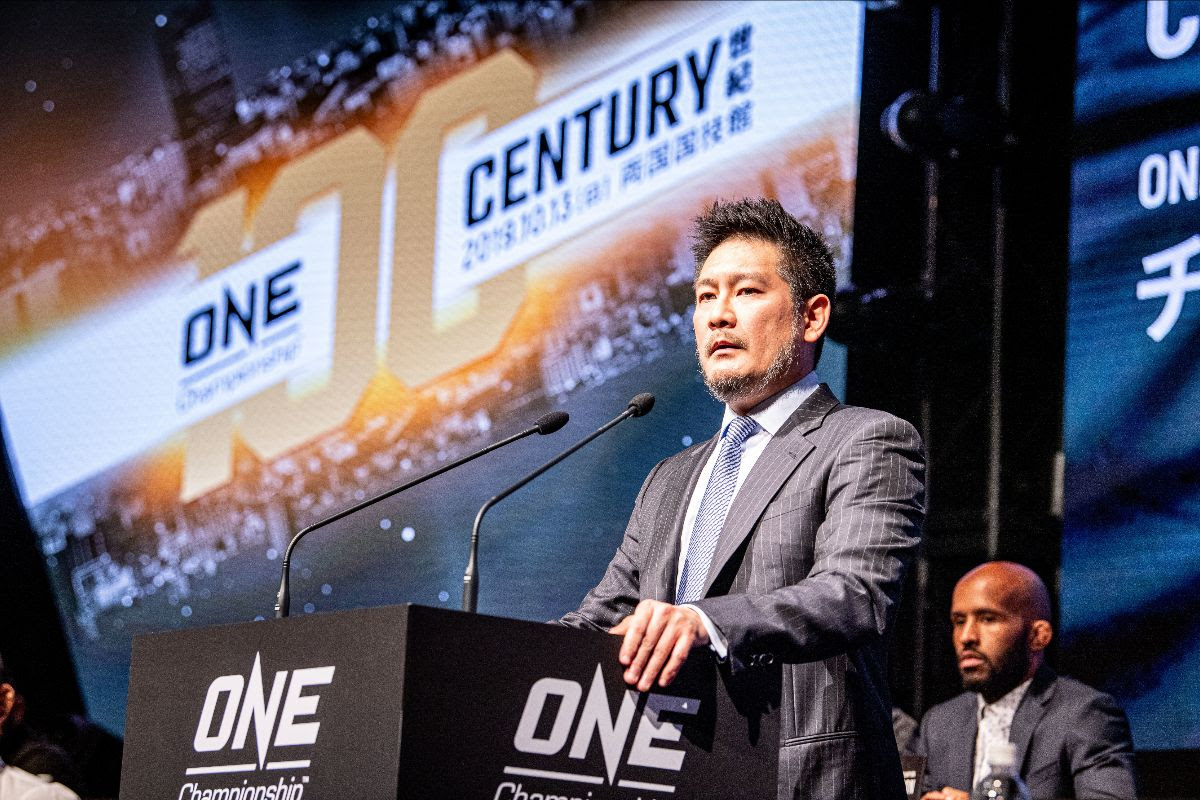 The largest global sports media property in Asian history, ONE Championship™ (ONE), recently held the ONE: CENTURY 世紀 Official Kick-Off Press Conference at the Park Hyatt in Tokyo last Thursday, 10 October ahead of the organization’s historic 100th live event happening this weekend.

Chatri Sityodtong, Chairman and CEO of ONE Championship, stated: “This is a historic moment, not only for Japan, but for the entire world of martial arts. I named this event, ONE: CENTURY, to signify the greatest martial arts event in the last 100 years. 28 World Champions from across various martial arts, seven World Title bouts, two full-scale events — it has never been done before in history. It gives me great pleasure to be with you here today. Our current estimate is that we will have 70 million viewers for ONE: CENTURY, making it the largest martial arts event in history. My fellow brothers and sisters are here, the greatest martial artists on the planet, but above all, truly amazing human beings. The world will witness greatness. Most importantly, the world will witness the unleashing of real life superheroes who ignite the world with hope, strength, dreams, and inspiration. Let us all embrace the true spirit, the warrior spirit of martial arts. Let’s show the world the power of martial arts.”

Andy Hata, President of ONE Championship Japan, stated: “We’ve been through so much to get to this point. We are happy to give the Japanese people hope. Everyone knows how big of an event this is and we’re extremely excited to showcase Japan’s rich martial arts history and tradition. Our martial arts values will be on display here in Japan. We want to make this historic 100th event one with pride and honor. This will be the starting point of a new era of martial arts in Japan. We want as many Japanese people to know how great ONE Championship is, and we want to inspire more Japanese martial artists to come to the world’s biggest platform. We aim to create more opportunities for Japanese athletes to showcase their talent to the world.”

Angela Lee, ONE Women’s Atomweight World Champion, stated: “Hi everyone, it’s so great to be back here in Tokyo, Japan for the second time this year. I’m so excited for this upcoming match. This event is about celebrating ONE Championship’s 100 events. That’s huge. I joined ONE Championship in 2015, fresh out of high school. All of my professional fights have been with ONE and it has been quite a journey. ONE Championship, the entire team and staff, is just a pleasure to work with. They’ve seen me through the highs and the lows, and everything in between. I’ve grown so much not just as a fighter and as a World Champion, but also as a person. In many ways, ONE Championship has helped me to grow into the woman I am today. I am so grateful to be headlining this event. This match, I think everyone has been dying to see. It’s going to be a completely different fight from before. I’ve had an amazing training camp for this bout, and thank God no injuries. I pushed myself harder than ever. I’m fully confident in defending my belt and showing why I’m the champion in this division.”

Xiong Jing Nan, ONE Women’s Strawweight World Champion, stated: “I’m so happy to be back here in Tokyo. Six months ago, Angela [Lee] went down to my weight class and tried to get my belt. I kept what was rightfully mine. Now, it’s my turn to go down to her weight class for the belt. Just like half a year ago, I will win this match. But unlike last time, I won’t leave without two belts over my shoulders. There is nothing that can stop me this time. I have 1.4 billion people standing behind me.”

Aung La N Sang, ONE Middleweight and Light Heavyweight World Champion, stated: “Thank you, Tokyo, for hosting ONE Championship’s 100th event. I love how noble and respectful the Japanese people are. It’s an honor for me to compete in front of the Japanese fans. I want to thank Brandon Vera for asking me for this fight. I’ve been a big fan of his since I was in college 10 years ago. I’ve been training for over six months now, and training has gone very well. I hope to put on the best performance of my life this Sunday. I’ve been with the company since ONE Championship 17. This organization upholds the true martial arts values. It has respect for its athletes. I’m so honored to be a part of this promotion. I promise you guys, ONE Championship is the future of martial arts.”

Brandon Vera, ONE Heavyweight World Champion, stated: “I’m very excited to be here in Japan competing, and very excited to be on the path to fulfilling a lifelong dream of mine to become a titleholder in two divisions. I’m the ONE Heavyweight World Champion, which I will be until I retire. Now, I am chasing after the ONE Light Heavyweight World Title against a man who is cut from the same cloth. This bout means more to me than anything else in my career. It’s a dream come true to be with ONE Championship all throughout Asia. It’s a dream to compete and perform in front of all of you here in Japan. It’s time for me to fulfill my dreams and my destiny. Thank you ONE Championship, and Mr. Aung La for making this bout possible.”

Bibiano Fernandes, ONE Bantamweight World Champion, stated: “I am always very happy to come back to Japan. I began my mixed martial arts career here in Japan. In 2009, I was the DREAM Bantamweight Champion. In 2011, I was the DREAM Featherweight Champion. I’m back and glad to see all of my friends here. I’m here with my longtime training partner Demetrious Johnson, who is fighting here again. I want to thank Chatri Sityodtong for the opportunity. ONE Championship is the Home of Martial Arts. ONE Championship cares about its athletes. I realized that at this moment, I want to be a part of ONE Championship forever in my life. I have prepared 1000% for this fight. I’m ready to give the best fight of the night. Thank you, Japan!”

Kevin Belingon, former ONE Bantamweight World Champion, stated: “It’s an honor and a privilege for me to be a part of this historic event, ONE: CENTURY. Getting to compete here in Japan excites me because of the support of the Japanese fans. This is my fourth match with Bibiano Fernandes. I trained very hard for this one and I encourage everyone to watch my fight and don’t miss this historic event.”

Walter Goncalves, ONE World Title Challenger, stated: “I am honored to be here and to fight for ONE Championship. I’m looking forward to Sunday night, where I will be fighting one of the best Thai fighters in the world. Thank you guys for coming out today and I appreciate you all.”

Demetrious Johnson, ONE Flyweight World Grand Prix Championship Finalist, stated: “Thank you everyone for coming out tonight. I appreciate you guys, you’re an awesome crowd. I’m very excited to be back here in Japan. I’m looking forward to facing Danny Kingad. He’s a great competitor. I’m looking forward to competing against Team Lakay. I want to thank my team, Chatri [Sityodtong], for the opportunity. I would like to congratulate ONE Championship for 100 events. You guys are in for a treat. I’ve trained very hard for this fight. I know Danny Kingad is no joke and it’s going to be a sick fight.”

Danny Kingad, ONE Flyweight World Grand Prix Championship Finalist, stated: “To the ONE Championship CEO and Chairman, Chatri [Sityodtong], to the media, to my fellow martial artists, and the millions of fans around the world, thank you. I’m happy to be back here again and competing in the most important match of my life. It is an honor to represent my country, the Philippines, and I am glad to be here with my Team Lakay family. I’m excited to showcase Filipino martial arts talent to the American audience. It’s a dream come true to share the ONE Circle with a legend in Demetrious Johnson. But I believe I have the chance to beat him. If I beat him, it will be the greatest accomplishment of my career.”

Christian Lee, ONE Lightweight World Champion, stated: “I’m so excited to be here. This is going to be my first time fighting in Tokyo. It’s such an honor to be a part of ONE Championship’s 100th event. I’m here fighting alongside these World Champions, alongside my sister the champion. I’m excited to go out there and put on a show for you guys. It’s going to be an exciting fight.”

Saygid Guseyn Arslanaliev, ONE Lightweight World Grand Prix Championship Finalist, stated: “I’m very happy to be here in Japan, in front of this crowd here in Tokyo. I’ve been dreaming about this moment all my life. I’ve had a very long and hard preparation for this training camp. I’ll do my best to show you my best performance.”

Giorgio Petrosyan, ONE Featherweight Kickboxing World Grand Prix Championship Finalist, stated: “I’m so happy to be here now, after 10 years. I’m really pumped and excited to be performing in this show. I promise I will put the best fight of my career forward. In this magical place of Tokyo, for me it means so much to be here, fighting for ONE Championship, which I consider honestly to be the biggest promotion in the world. Getting the World Title and winning the tournament will be a great honor and a big pleasure.”

Samy Sana, ONE Featherweight Kickboxing World Grand Prix Championship Finalist, stated: “Good evening Tokyo. It’s my first time here and I am honored to fight in this amazing city. I would like to thank Chatri [Sityodtong] and all the ONE Championship staff for this wonderful event. I think it will be a huge event and I look forward to it. I’m looking forward to putting on a show.”