ONE CHAMPIONSHIP ANNOUNCES ADDITIONAL BOUTS FOR ONE: SPIRIT OF A WARRIOR SET FOR YANGON ON 29 JUNE AUNG LA N SANG TO DEFEND ONE MIDDLEWEIGHT WORLD CHAMPIONSHIP AGAINST KEN HASEGAWA 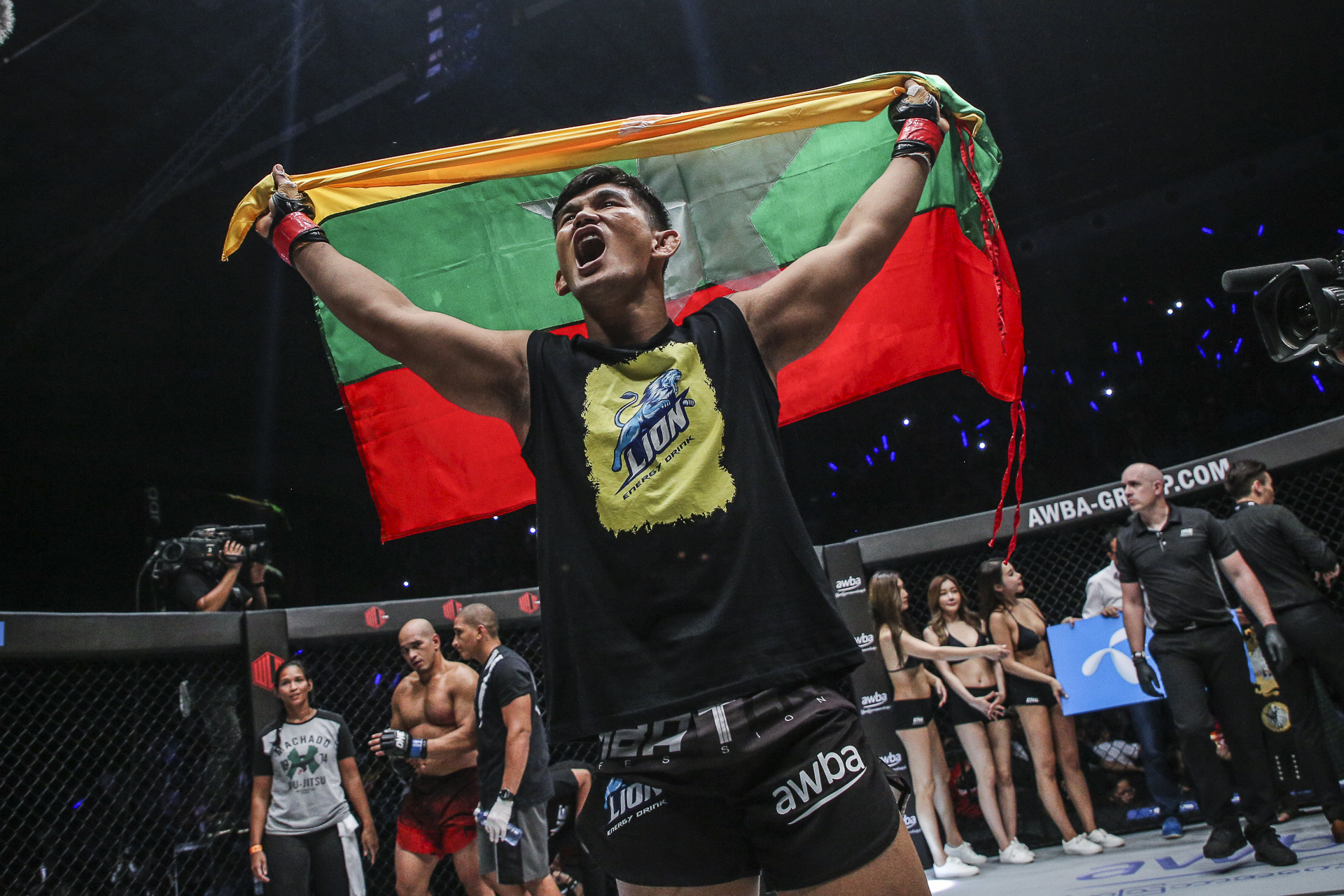 hatri Sityodtong, Chairman and CEO of ONE Championship, stated: “I can’t wait to go back to Myanmar for a star-studded event in Yangon. In anticipation of the extreme passion that Myanmar fans demonstrate, we have prepared the best card that will undoubtedly leave an indelible mark in martial arts history. Their hero, Aung La N Sang, will face a talented and tough challenger from Japan, Ken Hasegawa, in the main event. Aside from the thrilling headliner, we have included the biggest names from the world of martial arts in the lineup. Whether you are in Myanmar or in any part of the world, this will be an event that you can’t afford to miss.”

33-year-old Aung La N Sang is Myanmar’s most successful athlete in history, whose impressive submission skills have earned him the moniker of ”The Burmese Python”. Born in Myitkyina in the mountainous Kachin State, he belongs to an ethnic minority known as the Kachin. Aung La N Sang captured the ONE Middleweight World Championship with a unanimous decision victory over Vitaly Bigdash in June 2017. In his most recent bout, he defeated Brazil’s Alexandre Machado to be crowned the new ONE Light Heavyweight World Champion. Next up, Aung La N Sang will defend his middleweight title against Ken Hasegawa.

31-year-old Ken Hasegawa of Kanagawa, Japan is a martial arts veteran set to make his ONE Championship debut. The middleweight contender has stopped four of his last five opponents, showcasing the undeniable submission skills and thunderous knockout power that he has become known for competing in Japanese martial arts promotions Deep and Rizin. With a professional record of 16-2, which includes four submissions and six scintillating knockouts, Hasegawa will step into the ONE Championship cage for the first time at ONE: SPIRIT OF A WARRIOR. He is set to challenge Aung La N Sang for the ONE Middleweight World Championship.

Leandro “Brodinho” Issa is a 34-year-old Brazilian jiu-jitsu world champion black belt from Sao Paulo, Brazil, who trains and competes out of the world-renowned Evolve Fight Team in Singapore. With a record of 15 wins and six losses, including nine wins by submission and two by knockout, Issa has proven to be an exciting competitor with a penchant for spectacular victories. A pioneer of ONE Championship’s bantamweight division, Issa will take on Guamanian prospect Roman Alvarez in his next assignment.

Hailing from the island of Guam and representing the highly-acclaimed Spike 22 camp, Roman “Sonic Boom” Alvarez is one of the most sought-after bantamweights in the Asia-Pacific region, holding an impressive professional record of eight wins and one loss. Five of his eight career wins have come by way of finish. Alvarez will make his first ONE Championship appearance on 29 June against Brazilian mainstay Leandro Issa.

31-year-old Sagetdao “Deadly Star” Petpayathai is a Muay Thai specialist and a four-time Lumpinee Stadium champion who has won every major title in Muay Thai. Voted by Thai media as one of the greatest Muay Thai practitioners in history, Sagetdao is known for his highly technical knowledge in all of Muay Thai’s varied techniques. Concluding his Muay Thai career with a record of 162-62-1, Sagetdao transitioned to mixed martial arts in 2017, acing his first three bouts with flying colors. In his next outing, Sagetdao will be taking on China’s Ma Jia Wen.

Freestyle wrestling standout Ma Jia Wen is a 21-year old martial artist from Tianjin, China with a 5-2 record. He is part of a rapidly rising contingent of talented Chinese fighters who have shown great promise in combining the various aspects of striking and grappling. In his last outing, he notched a second-round submission win over Pakistan’s Ahmed Mujtaba. Ma has another tall order in front of him in his next bout, as he goes head-to-head with Muay Thai legend Sagetdao Petpayathai.

30-year-old Rafael Nunes is a martial artist from Sao Paulo, Brazil with an 11-1 record. He is the former Premier FC Lightweight Champion and has steamrolled through the competition in his home country with a knack for winning by exciting finish. All but one of Nunes’ 11 wins have ended within the distance. A Brazilian jiu-jitsu brown belt, Nunes is equally comfortable finishing his opponents by submission or by strikes. Nunes made a triumphant return to ONE Championship this past January, defeating Filipino veteran Eric Kelly via second-round submission. He looks to showcase his multi-faceted skill set in his next bout, squaring off with grizzled Japanese combatant Tetsuya Yamada.

28-year-old Tetsuya Yamada of Kanagawa, Japan, is an established martial artist with a distinct ability to seek out highlight-reel stoppages. He made his ONE Championship debut in January 2016, in an extremely high-level wrestling showdown against Eduard Folayang of the Philippines. A seasoned grappler, over half of Yamada’s 25 career victories have come by spectacular finish, with the ability to end bouts either by submission or knockout. In his most recent bout, Yamada made quick work of Eric Kelly to win by first-round rear-naked choke. On 29 June, Yamada will take on Rafael Nunes.

28-year-old Ahmad Qais Jasoor is an unbeaten bantamweight competitor from Kabul, Afghanistan, owning a spotless record of 3-0. The former HFC Bantamweight Champion has only gone the distance once in his career, finishing his first two professional bouts by way of submission. Jasoor joins the promotion’s stacked bantamweight division, leading him to his debut bout against Chen Lei at ONE: SPIRIT OF A WARRIOR.

Unbeaten Chinese martial artist “Rock Man” Chen Lei of Changsha is a Brazilian jiu-jitsu practitioner and the Shanghai Open BJJ Champion. His submission prowess has led Chen to seven-straight victories as a professional. In his last bout, Chen continued his spectacular winning streak with a third-round stoppage of Filipino stalwart Burn Soriano. Chen now moves on to his next contest, a tough assignment against Afghanistan’s Ahmad Qais Jasoor.

30-year-old Tukkatatong Petpayathai is one of the most revered kickboxers in the world of Muay Thai, capturing numerous titles throughout his career such as the Channel 7 Muay Thai Championship, the North East Thailand Championship, and the Andaman League Tournament Championship. Competing since the age of 10, Tukkatatong has over 200 professional Muay Thai bouts, and has been highly-ranked at both the Lumpinee and Rajadamnern Stadiums. He is known for his versatility in the ring, being able to switch between a technical and an aggressive style. Tukkatatong is set make his ONE Super Series debut against Panicos Yusuf.

Panicos Yusuf is one of the biggest names in British Muay Thai. Born in Limassol, Cyprus, he discovered Muay Thai in his homeland, and continued to train after migrating to the United Kingdom at the age of 20. Under the tutelage of striking coach Paul Tite, the two-time Muay Thai World Champion is regarded by many to be one of the very best kickboxers of his generation, continuing to amaze the global Muay Thai scene with his intelligence and skill in the ring. Aiming to bolster his growing repertoire as an international Muay Thai star, Yusuf directs his career path to ONE Championship. He is scheduled to have his maiden ONE Super Series appearance against Tukkatatong Petpayathai.

Strawweight contender Jeremy “The Jaguar” Miado of Manila, Philippines is a martial artist with a 7-2 professional record, and a former Blaze FC Strawweight Champion. He is a Muay Thai and boxing practitioner who owns a Muay Thai record of 76-7. In his most recent bout, Miado shocked the world by knocking out former ONE Strawweight World Champion Dejdamrong Sor Amnuaysirichoke in the first round last March. Miado seeks to continue his winning ways, locking horns with Thailand’s Kritsada Kongsrichai.

Strawweight contender Kritsada “Dream Man” Kongsrichai of Thailand is a talented martial artist and one of the most promising young athletes in ONE Championship. He won two of his last three outings, scoring first-round stoppage victories over the likes of Adrian Mattheis and Rabin Catalan. Kongsrichai aims to place himself back on the winning track, as he is slated to take on the Philippines’ Jeremy Miado.

Competing out of Brisbane, Australia, Elliot Compton is a four-time World Cage Muay Thai Champion. Having a professional record of 76-7, Compton is known for his fan-friendly style that puts fans on the edge of their seats. He made his ONE Super Series debut last April, facing Cosmo Alexandre in a dazzling striking contest. Compton seeks to redeem himself by capturing his first win under the ONE Championship banner, as he is slated to duke it out with the debuting Matthew Semper.

A fixture at Tiger Muay Thai & MMA Training Camp in Phuket, Thailand, Matthew Semper is one of the top draws in Thailand’s local kickboxing scene, exhibiting a striking prowess that is virtually unmatched in his division. The 30-year-old American has earned several accolades in his professional career, including the PK1 Super Heavyweight and AMCO Cruiserweight Championship titles. All eyes will be on Semper at ONE: SPIRIT OF A WARRIOR, as he collides with Elliot Compton in his ONE Super Series debut.

ONE: SPIRIT OF A WARRIOR