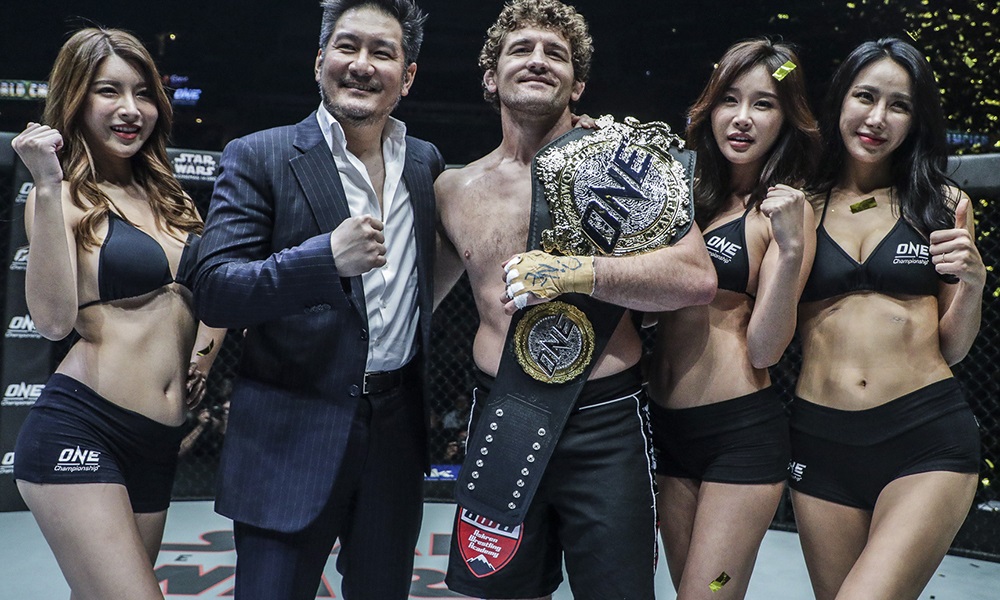 ONE Championship returned to Singapore on 24th November with an exciting fight card at the Singapore Indoor Stadium featuring welterweight title fight between the undefeated Ben Askren and Shinya Aoki as the main event headliner. As expected, ONE Championship once again delivered an action-packed night for fight fans who filled the stadium eager to watch their heroes and superstars compete in the ‘10 fight’ event.

Ben Askren defeated Shinya Aoki via TKO: The Funky needed just under a minute put off Shinya Aoki and retain his welterweight title belt. Shinya Aoki looked timid from the opening seconds of the bell and pulled a guard that Ben got hold off and held a standing can opener position. He then dropped the Japanese legend on the canvas and landed heavy right-hand strikes. Unable to defend and make a move Shinya Aoki crumbled. The referee had seen enough and stepped in to stop the fight at 4:03 secs of the first round.

A familiar sight. @Benaskren untouched, smiling, with gold on his shoulder after a fistfight. Undefeated. @ONEChampionship #ImmortalPursuit #Singapore pic.twitter.com/rXtIQ0CDx6

Amir Khan defeated Adrian Pang via unanimous decision: In a gruelling 15 min back and forth action, Amir Khan emerged victorious using his long reach and ring control. Leg and head kicks were the key for Amir in the initial rounds, as he landed tiger kicks to Adrian’s knees. Adrian had no answer for Amir’s leg kicks and it was clear he was not prepared for them. At one point, Adrian lifted Amir and dropped him on the cage, but unable to finish him had to settle with it. Adrian opened a bit in the third round, but it was not enough as he fell short in the judges’ scorecards.

Leandro Issa defeated Dae Hwan Kim via unanimous decision: Bantamweights Issa and Kim put it all inside the cage as they displayed brilliant ground game offence and defence. But ultimately, Kim fell short and could not with stand the pressure from Issa. Takedowns after takedowns from Issa put Kim in dangerous positions, but he defended well. Whenever Kim decided to rely on striking, Issa responded by his ground skills and taking Kim down in every round. It was a clean victory for the Brazilian who looked flawless tonight.

May Ooi defeated Vy Srey Khouch via submission: Mighty May continued her dominance as she displayed her slick ground skills second time around. May quickly took Srey down and took on a full mount position and unleashed elbows, punches until Srey gave up her back in an attempt to overturn. May wrapped her hands around the neck and squeezed until Srey could no longer take it and tapped at 3:58 secs of the first round. This is May’s second submission win in ONE Championship.

Do not go gentle into that good night. @ONEChampionship #ImmortalPursuit #Singapore #MMA pic.twitter.com/uc4m5xRjKr

Ahmed Mujtaba defeated Li Kai Wen via first-round disqualification: This fight had fireworks written all over it, but it turned out to be a disappointment as it ended in a disqualification. Both the featherweights showed their hatred during the press conference and no love was lost when they faced off inside the cage.

They both exchange strikes and when Mujtaba went in for a takedown, Li Kai unloaded punches onto the side but out of nowhere began hitting on the back of the head. Referee had to step in and stop the fight, while Mujtaba went into a fetal position and later collapsed.

Tiffany Teo defeated Puja Tomar via submission: Local sensation and former boxing champion Tiffany extended her undefeated streak with a dominant performance over the relatively smaller Puja Tomar. The Indian showcased a series of front and side kicks that had the audience go nuts. Tiffany kept her cool and kept on moving forward as they clinched, she threw her opponent on the ground and held the top control unloading elbows and punches until she got hold of her arm and submitted her with an arm bar at 4:07 secs of the first round. With this win Tiffany Teo gets a crack at the vacant flyweight title.

Mei Yamaguchi def. Gina Iniong via unanimous decision: With revenge on her mind, Mei entered the fight looking to avenge her 2014 split decision loss to Gina. Both the atomweights began the round measuring their distance, but Gina drew the first strike as she landed a right hand. Mei lands her own series of strikes and takes the fight to the ground where she is hit with an illegal up kick. As they resumed, Mei took her down again and landed heavy shots from the top. Mei began landing her punches and bruised Gina’s face later in the second round. Gina was breathing heavier, but Mei looked fresh. Taking advantage of her fading opponent, Mei easily took down Gina and attempted an arm-triangle. Mei then changed her game plan and resorted to only strikes as they both engaged in exchanging leather. In the last moments of the fight, Mei scored another takedown but unable to finish her opponent had to settle down for the unanimous decision win. Soon after her win, Mei asked for a rematch with the current champion Angela Lee, which should likely next year.

Arnaud Lepont defeated Richard Corminal via submission: After two long years from the cage, Arnaud ‘The Game’ Lepont made his return with a spectacular performance as he wasted no time in getting Corminal to the ground. Corminal the taller guy took his time to loosen up, but Arnaud seized an opening with a takedown and quickly gets the side control. He then sunk in a tight arm-triangle choke and within 10 secs, Corminal tapped out at 3:16 secs of the first round. Arnaud is now 3-4 in ONE Championship.

Muhammad Aiman defeated Yang Fei via unanimous decision: Malaysia’s Aiman dominated the Chinese Yang Fei to full three rounds as he used his height and reach advantage keeping the shorter Fei away. Aiman displayed lot of different techniques and mixing things up with his punches and kicks that kept Yang Fei surprised. Aiman kept going in for the low kicks and dropped Yang a couple of times. Aiman executed a beautiful combo where he faked a superman punch followed by a left hook and a low thigh kick. Yang took it like a tough nut and kept on moving forward. More leg kicks from Aiman and Yang changes levels for a takedown but Aiman is quick to defend. It was a clear domination from the Jungle Cat Muhammad Aiman, who with this win bounced back to the win column.

Miao Li Tao defeated Sim Bunsrun via TKO: During the press conference there was a heated moment between the Chinese Miao Li and Cambodia’s Sim Bunsrun. They began the fight on the same note; measuring each other and looking for an opening. Miao Li’s intentions were clear – take the fight to the ground, use his strength and tire out Sim. 1:30 secs into the fight Miao goes in for a double leg but gets reversed by Sim. As soon as they stand up, Sim goes in for a head kick, but Miao’s reflexes are on point and as he steps back only to land an overhand right that sending Sim to the ground where Miao unloads more shots from the top. The referee steps in and stops the fight at 1:49 secs of the first round.