ONE Championship Kicks Off ONE: HEROES OF HONOR in Manila with Press Conference 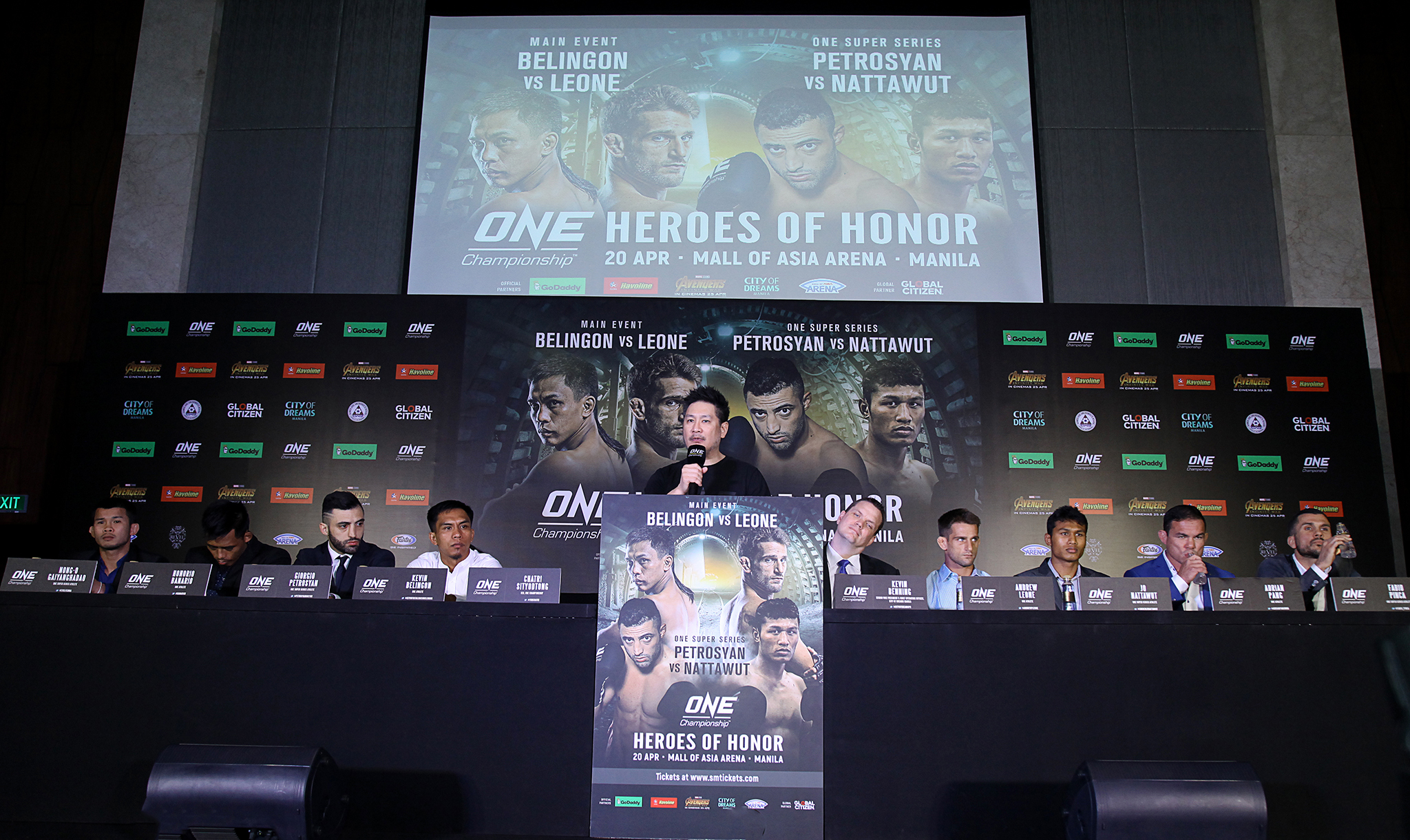 Asia’s premier martial arts organization, ONE Championship, is back in Manila for its second of four shows in 2018. In a press conference held at the Grand Ballroom of the City of Dreams in Manila, the promotion kicked off its latest event, ONE: HEROES OF HONOR, which is set for Friday, 20 April, at the Mall of Asia Arena.

In attendance were Chairman and CEO of ONE Championship, Chatri Sityodtong, main event combatants Kevin “The Silencer” Belingon of Baguio City, Philippines and Andrew Leone of Cortland, New York, USA, global kickboxing superstar Giorgio “The Doctor” Petrosyan and opponent ‘Smokin’ Jo Nattawut of Thailand, among others.

Belingon (17-5), who is currently riding a four-bout winning streak, takes on former bantamweight world title challenger Leone (8-3) in a contest with huge title implications. Both Belingon and Leone are seeking a rematch against reigning ONE Bantamweight World Champion Bibiano “The Flash” Fernandes, but will have to go through each other to secure it. 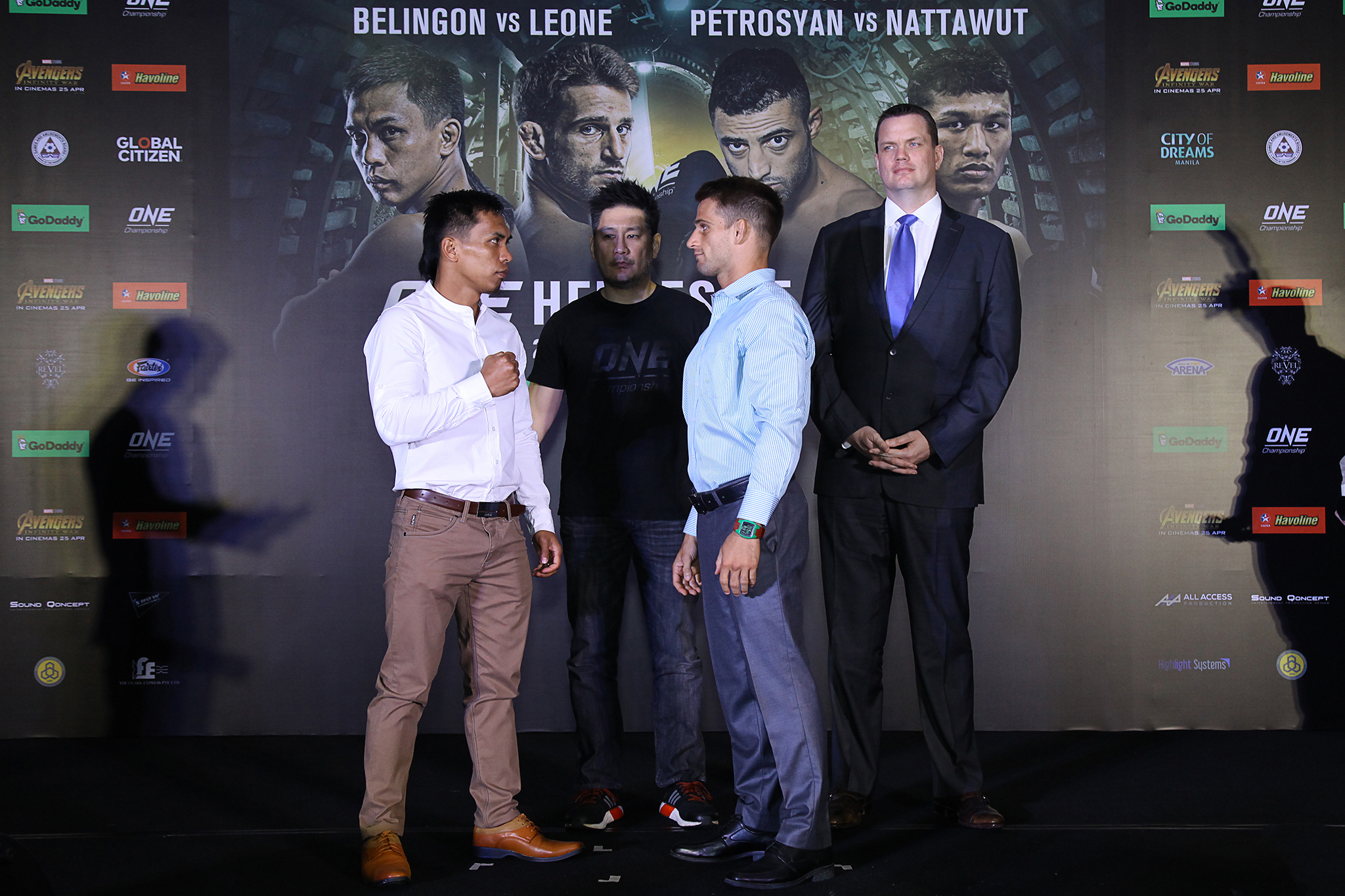 “I know Andrew Leone is a tough opponent, and I need to be at my best to win. It’s going to be one of my biggest matches to date,” said Belingon. “I am very thankful to ONE Championship for allowing me to be a part of this historic event. I can’t leave anything to chance. I have to give another great performance. Beating Leone would be the next step to the title.”

Belingon’s opponent Leone also knows what’s at stake in this matchup, and he isn’t taking the Filipino lightly by any means.

“This is a tremendous opportunity for me. I can’t wait to go up there and show what I can do, to perform to the best of my ability,” said Leone. “Kevin Belingon is a tough guy. He’s a hard puncher and he has power. But I’m not worried about his striking. I’ve faced tough guys before. All I can say is that I’ll be ready.”

“It’s an open invitation to the greatest strikers in the world,” said Sityodtong. “Fans will witness the absolute elite in striking martial arts, as they go head-to-head on the biggest and most prestigious global stage of competition.”

“Aside from the many great bouts this Friday night, what I’m most excited about is the launch of ONE Super Series. ONE Championship is the only global player to encompass all styles of martial arts,” said Sityodtong. “We have the best in all styles going up against each other. That’s definitely something to look forward to.”

Making his appearance in the co-main event of the evening, kickboxing elite Giorgio Petrosyan is elated at his chance to leverage ONE Championship’s massive worldwide audience reach. Broadcast to a potential 1.7 billion on any given night to over 136 countries worldwide, ONE Super Series will harness the full potential of ONE Championship’s global influence in order to highlight the greatest in striking martial arts.

And while the promotion is gearing up for a very busy mid-year, Sityodtong teases that there are plenty more surprises to come, including the highly-anticipated launch of ONE Championship’s new mobile app, slated to arrive in the coming months.

“The new ONE Championship mobile app is a true game changer in the world of martial arts,” said Sityodtong. “Soon, fans will have access to all our blockbuster live events and complete library of Hi-Definition content in the palm of their hands, all for free, and you can watch from anywhere in the world. It’s going to take ONE Championship to the next level.”

Before the end of the press conference, Sityodtong also revealed plans to establish a professional boxing league in addition to ONE Super Series, inviting the greatest boxers from the Philippines and around the world to join the promotion.

Also in attendance at the press conference were main card competitors Honorio “The Rock” Banario of Team Lakay, opponent Adrian “The Hunter” Pang of Australia, as well as various ONE Championship athletes who mixed in with the crowd and participated in the festivities.

ONE: HEROES OF HONOR goes down this Friday, 20 April at the Mall of Asia Arena in Manila, Philippines. Gates open at 6:30 PM local time.

Previous articlePhotos: The Aljamain Sterling Story
Next articleWWE: List of all the Superstars drafted to RAW