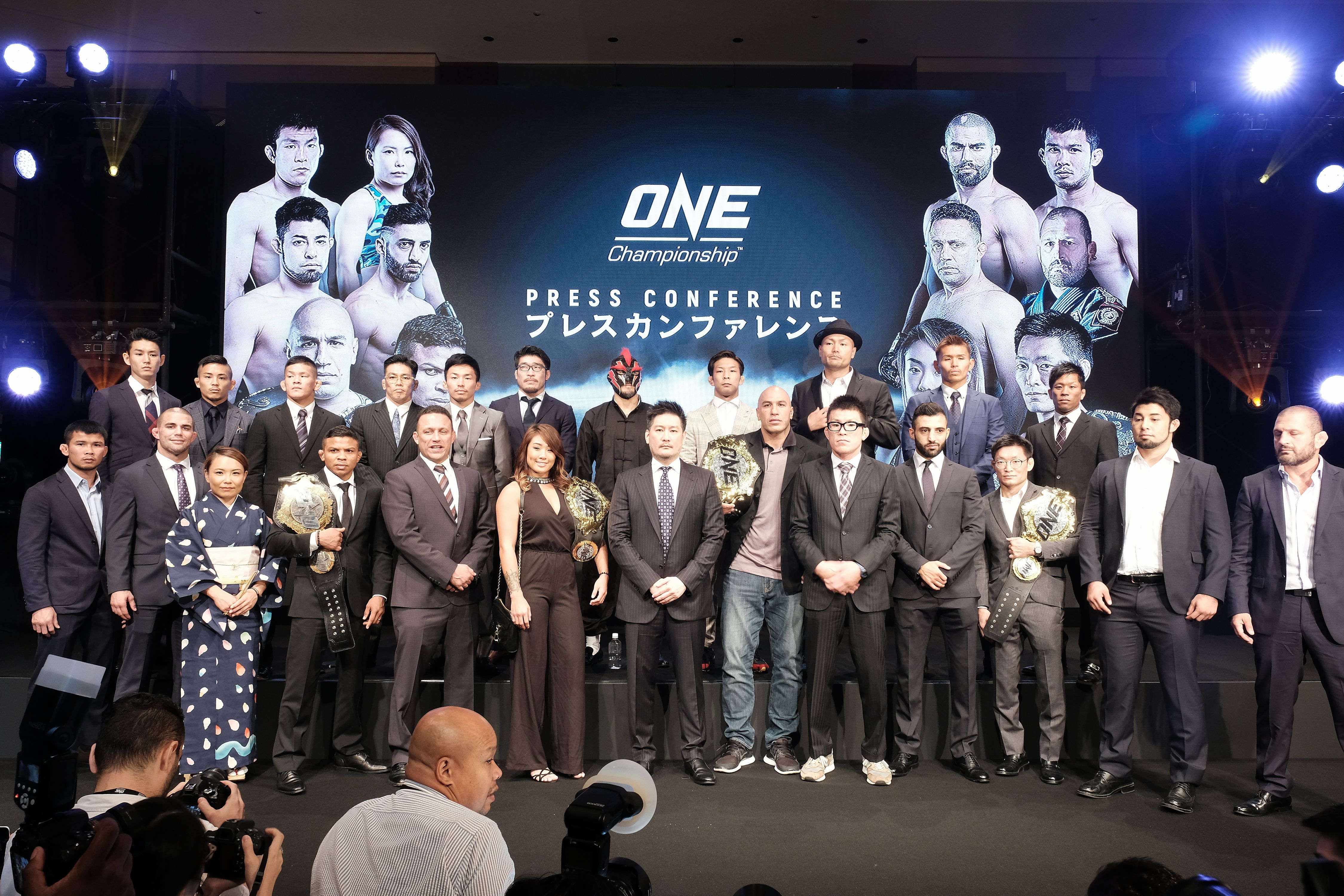 ONE CHAMPIONSHIP ANNOUNCES THE FIRST 24 EVENTS PLANNED FOR 2019

ONE CHAMPIONSHIP SUPERSTARS IN ATTENDANCE AT TOKYO PRESS CONFERENCE

23 August 2018 – Tokyo, Japan: The largest global sports media property in Asian history, ONE Championship™ (ONE), just held a Press Conference announcing the promotion’s first live event in Tokyo, Japan, scheduled for 31 March 2019. Media from all across the globe gathered to participate in the Press Conference, which was led by Chairman and CEO of ONE Championship, Chatri Sityodtong.

The esteemed martial arts superstars took to the podium to deliver their thoughts in support of ONE Championship’s first live event in Japan, and what is in store for martial arts in Asia in the immediate future.

Official photos of the Press Conference can be found at this link: https://1drv.ms/f/s!Am0VcTcnsBbp52-lAmkY1XineSiF

Chatri Sityodtong, Chairman and CEO of ONE Championship, stated: “Japan has a rich martial arts culture and history, and ONE Championship has been planning for a very long time to bring our authentic martial arts experience right here to the fans, deep in the heart of Asia. Our mission at ONE Championship is sacred, we want to unleash martial arts superheroes unto the world — world-class athletes who ignite passion and hope, and who help weave martial arts into the very fabric of human life. By sharing their stories with the world, ONE Championship aims to change the lives of many through the beauty of sport and discipline.”

“It is our absolute pleasure to announce today that we will be officially holding our first ever live event in Tokyo next March. The ONE Championship superstars here today are some of the greatest talents in the world, bar none. They came out here to show their support for ONE Championship, and are living proof of the greatness of martial arts and the impact it has on our lives. Together, we can inspire the world to walk in the true values of martial arts — integrity, humility, honor, respect, courage, discipline, and compassion. We look forward to seeing you all once again, right here in March 2019.”

Renzo Gracie, martial arts legend, stated: “I believe in what ONE Championship is doing out here in Asia, and I believe in Chatri’s vision for martial arts. It warms my heart to see just how much respect we have built here as martial artists. This is what true martial arts is all about. I have been to Tokyo many times and the city never fails to amaze and surprise me. To be able to come full circle and bring martial arts back to Japan, it’s an amazing sight to behold. I am incredibly proud to be a part of this momentous occasion. Japan has played a huge role in the history of martial arts on a global scale, and it’s just right that it returns to glory once again. ONE Championship and Japan are a perfect fit and I foresee a bright future ahead.”

Angela Lee, ONE Women’s Atomweight World Champion, stated: “Thank you all for having me out here. I am thrilled to be part of this Press Conference. ONE Championship is doing big things out here in Asia and I am proud to be a part of it all. Japan is a beautiful country with great people and great culture. As the ONE Women’s Atomweight World Champion, I am proud to serve as a role model to all the aspiring martial artists in Japan and in Asia, especially the young girls who have dreams of becoming martial artists. Japan is such an incredible country and I can’t wait to experience what it has to offer.”

Shinya Aoki, former ONE Lightweight World Champion, stated: “Japanese martial arts is something that I hold dear to my heart. It is so much more than sport and competition. I live by the code of martial arts, and to be able to share that with everyone in the world, it’s an honor. This is the chance for Japanese martial arts to truly shine. Martial arts is my passion and I am grateful for the opportunity to help lead martial arts in Asia into the future. ONE Championship is a tremendous organization and now that we are going to have our first live event in Tokyo, it will only help highlight the beauty of martial arts in Japan.”

A separate summary of quotes from athletes who attended today’s event will be sent following the Press Conference.

Sityodtong also took the time out to reveal the ONE Championship 2019 calendar of events, which will see the promotion return to its strong roots in Singapore, the Philippines, Malaysia, Indonesia, Myanmar, China, and Thailand. Two events in Tokyo are scheduled for the year, taking place in March and October, while new markets Vietnam and South Korea are also introduced.

“I am thrilled to announce the first 24 of 30 events of our busy 2019 schedule at ONE Championship. In addition to the first 24 live events planned for all sports fans in Asia, there will be at least 6 ONE Warrior Series events that will continue to showcase the absolute best in martial arts, delivered by our martial arts superheroes. Of course, all of our live events will be available on the ONE Super App. 2018 isn’t over yet and we still have a lot of great stuff planned but 2019 is already shaping up to be an amazing year for us.”

ONE Championship 2019 Calendar of Events

ONE Championship is having a phenomenal 2018 thus far, and with eight more blockbuster live events left to close the year, there is a lot of world-class martial arts action to look forward to.

The next two events, ONE: BEYOND THE HORIZON set for 8 September in Shanghai, China, and ONE: CONQUEST OF HEROES set for 22 September in Jakarta, Indonesia already feature some of the most compelling martial arts contests of the year that fans can certainly look forward to.

In addition, world championship boxing makes its ONE Championship debut when The Ring and WBC Super Flyweight World Champion Srisaket Sor Rungvisai of Thailand defends his title against Iran “MagnifiKO” Diaz of Mexico in the main event of ONE: KINGDOM OF HEROES set for 6 October at the Impact Arena in Bangkok.

Previous articleUFC: Dana White says ‘Conor McGregor is my Ali, my Tyson’
Next articleUFC: Yair Rodriguez has pulled out of his UFC 228 bout against Zabit Magomedsharipov