ONE: CLASH OF LEGENDS – Things You Should Know About Bangkok Card 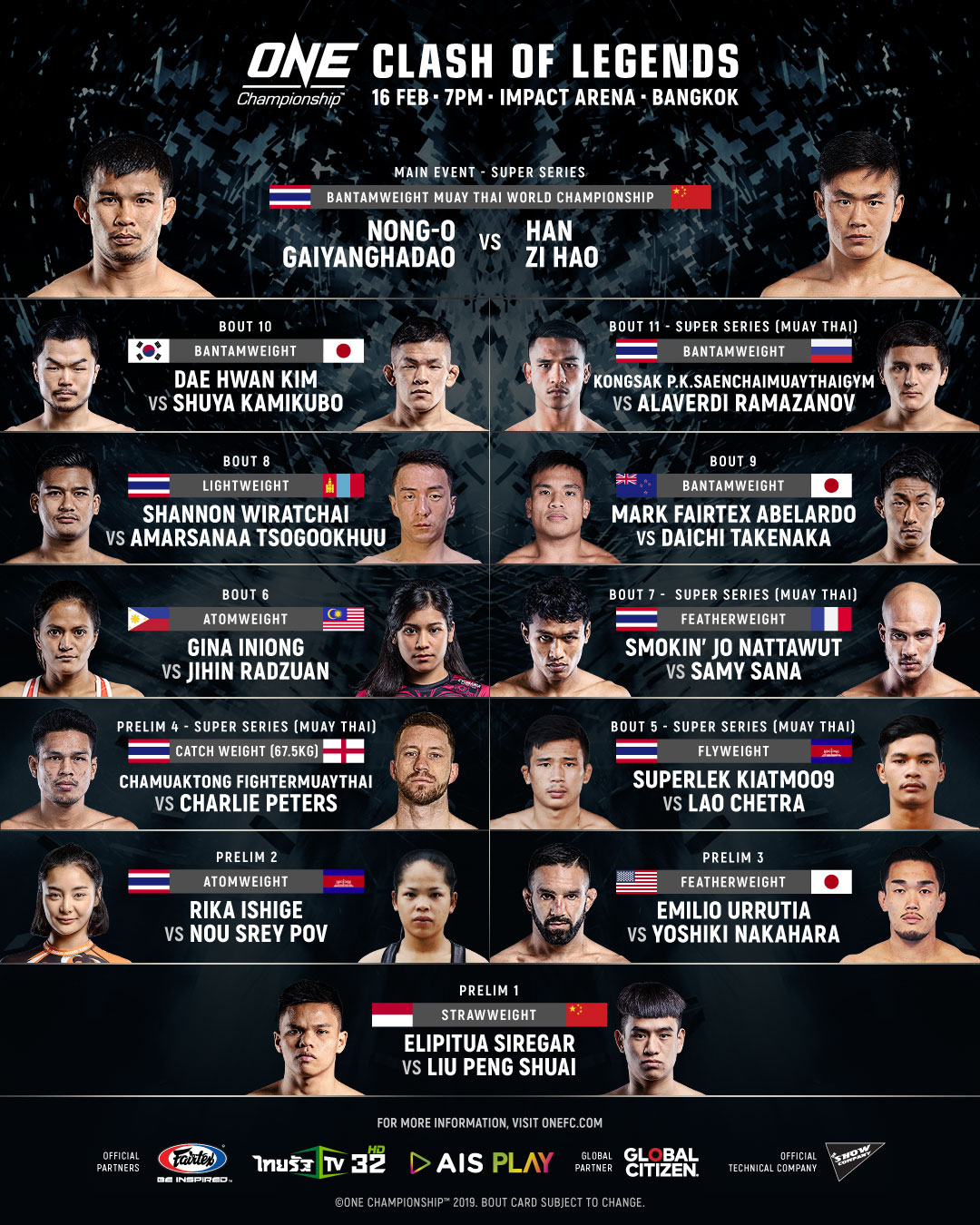 ONE Championship heads back to Bangkok, Thailand on 16 February for ONE: CLASH OF LEGENDS. It is an event that will feature one of the country’s most accomplished warriors competing for one of the promotion’s top prizes. Nong-O Gaiyanghadao will face China’s Han Zi Hao with the inaugural ONE Bantamweight Muay Thai World Title.

Before the main event, there will be multiple bouts– a mixture of Muay Thai and mixed martial arts contests. There are 12 matches in all counting the four prelim competitions. Here is a look at the five things you need to know ahead of ONE: CLASH OF LEGENDS

The Accomplishments of Nong-O

Fans who get an opportunity to watch him compete will be seeing a legitimate legend in action.

More Than Just a World Title on the Line

No man has ever worn the ONE Bantamweight Muay Thai World Title around his waist, so the winner of the main event will be forever etched in ONE Championship history. Nong-O’s accomplishments as an athlete are plentiful, but if he were to accomplish his goal at ONE: CLASH OF LEGENDS, he will have attained what is arguably the most prestigious World Title he’s ever held.

Han isn’t as experienced as Nong-O, so there is no question how much capturing the ONE Bantamweight Muay Thai World Title would mean to him. Perhaps even more significant than the title, a victory over a legend like Nong-O, in his hometown, could mean even more.

Native Thai Warriors on the Card

With so many Thai athletes competing, the crowd at the Impact Center should be in full throw by the time Nong-O climbs onto the platform.

She’s young, but Radzuan has been on a steady incline since her professional mixed martial arts career began. The “Shadow Cat” is 4-0 and she’s coming off her biggest win yet with a unanimous-decision over veteran Jenny Huang. At ONE: CLASH OF LEGENDS, Radzuan will try to remain undefeated as she battles the Philippines’ Gina Iniong.

It’s possible we could see Radzuan taking on Ishige in a pivotal atomweight match sometime in the future–especially if both of them are victorious.