ONE: DREAMS OF GOLD Will Be a Muay Thai And Kickboxing Bonanza 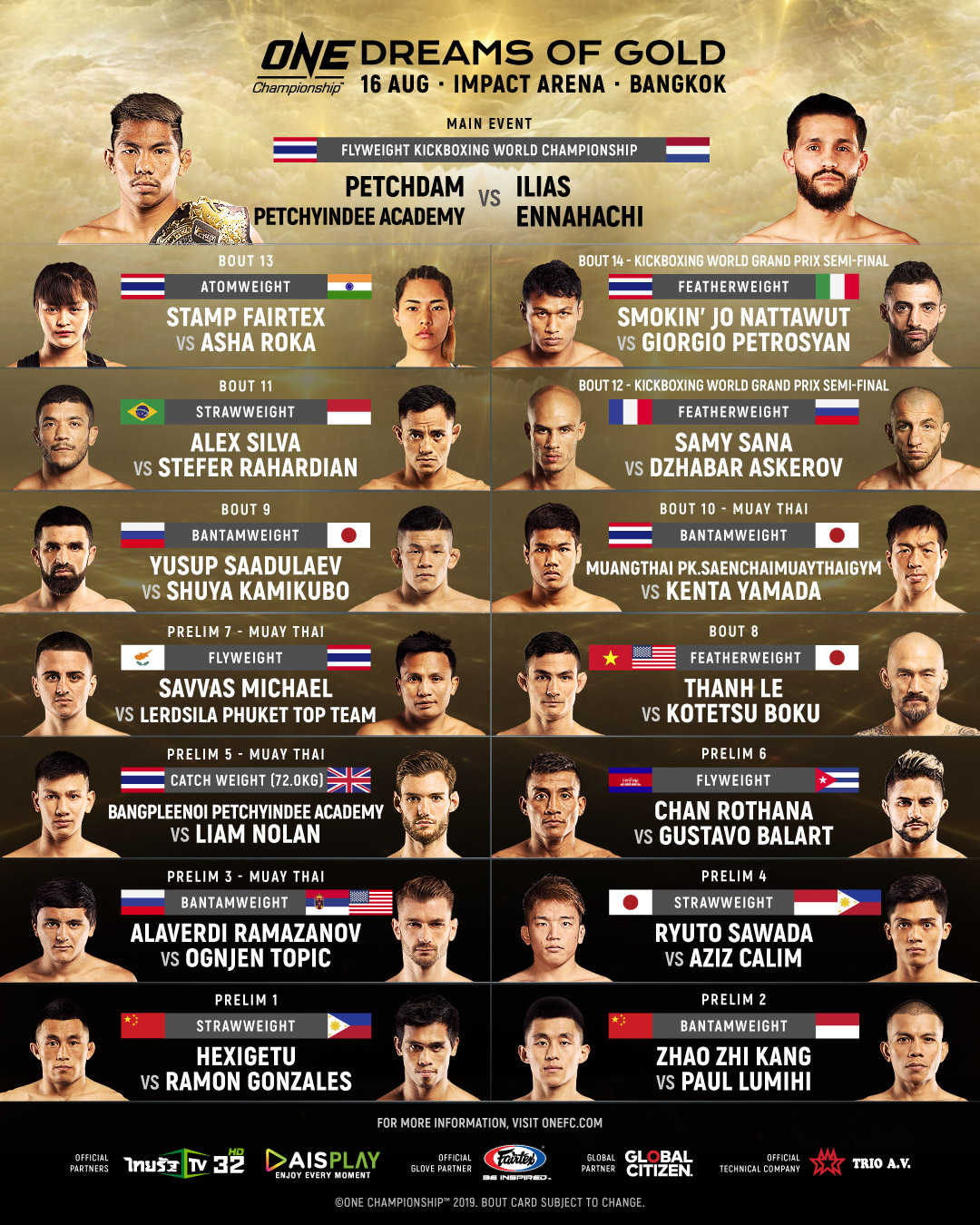 Few countries in the world, if any, have a more intense passion for kickboxing and Muay Thai than Thailand. Obviously, the roots of both sports run deep in Thai culture. Thus Bangkok, the site for the upcoming ONE: DREAMS OF GOLD card will be a can’t-miss show for those who have an appetite for the two disciplines. It will be a Muay Thai and Kickboxing bonanza.

At the top of the bill, ONE Flyweight Kickboxing World Champion and Thai superstar Petchdam Petchyindee Academy has what could be his toughest challenge yet as a member of the ONE Championship roster.

Petchdam is a multiple-time Muay Thai champion in addition to his standing with ONE. His left kick is already the stuff of legend, and he is still only 21 years old. He trains at the respected Petchyindee Academy with other prominent stars such as Petchmorakot and Sorgraw, so he is in great company.

Like Petchdam, Ennahachi is a young gun. While he hasn’t yet captured ONE Championship gold, he has already won six kickboxing world championships, and he is just 23 years old. His professional kickboxing record is 34-3, and he is making his ONE debut under the most exciting, yet challenging circumstances.

Ennahachi isn’t just making his promotional debut against the organization’s champion in his sport and weight class, he is also doing it in Petchdam’s home country. The task ahead of Ennahachi is a formidable one, but he doesn’t lack confidence or skills, so we will see how it turns out.

Petrosyan punched his ticket to this round with a unanimous-decision win over Petchmorakot just last month. The match was a rematch of their meeting earlier in the year. In the first meeting, Petchmorakot was ruled the winner in a controversial decision. A review was ordered, and a decision was made to have the two men meet in a rematch, and Petrosyan prevailed.

Petrosyan defeated Nattawut in the former’s promotional debut back in April 2018, he’ll be looking to repeat that result in Bangkok while securing a spot in the finals.

Nattawut will be looking to fix his issues from the first bout so that he can move one step closer to the US $1 million prize waiting for the man who wins the prestigious ONE Featherweight Kickboxing World Grand Prix.

The other semifinal of the Grand Prix will also take place in Bangkok.

After his surprising win over the legendary Yodsanklai IWE Fairtex in the quarterfinals, Samy Sana will be looking to move into the finals. Sana draws two-time Russian Challenge and TNA Kickboxing World Champion Dzhabar Askerov. Like Sana, Askerov controlled his quarterfinal matchup, defeating Enriko Kehl en route to a unanimous-decision victory.

On the Muay Thai side, Thailand’s “Elbow Zombie” Muangthai PK. Saenchaimuaythaigym makes his return to the ONE Championship stage against Japan’s Kenta Yamada. Muangthai is approaching 200 career victories as his record sits at an impressive 198-41-4. He won his debut with ONE in November 2018 against Panicos Yusuf.

If you love kickboxing and Muay Thai, ONE: DREAMS OF GOLD is an easy sell.