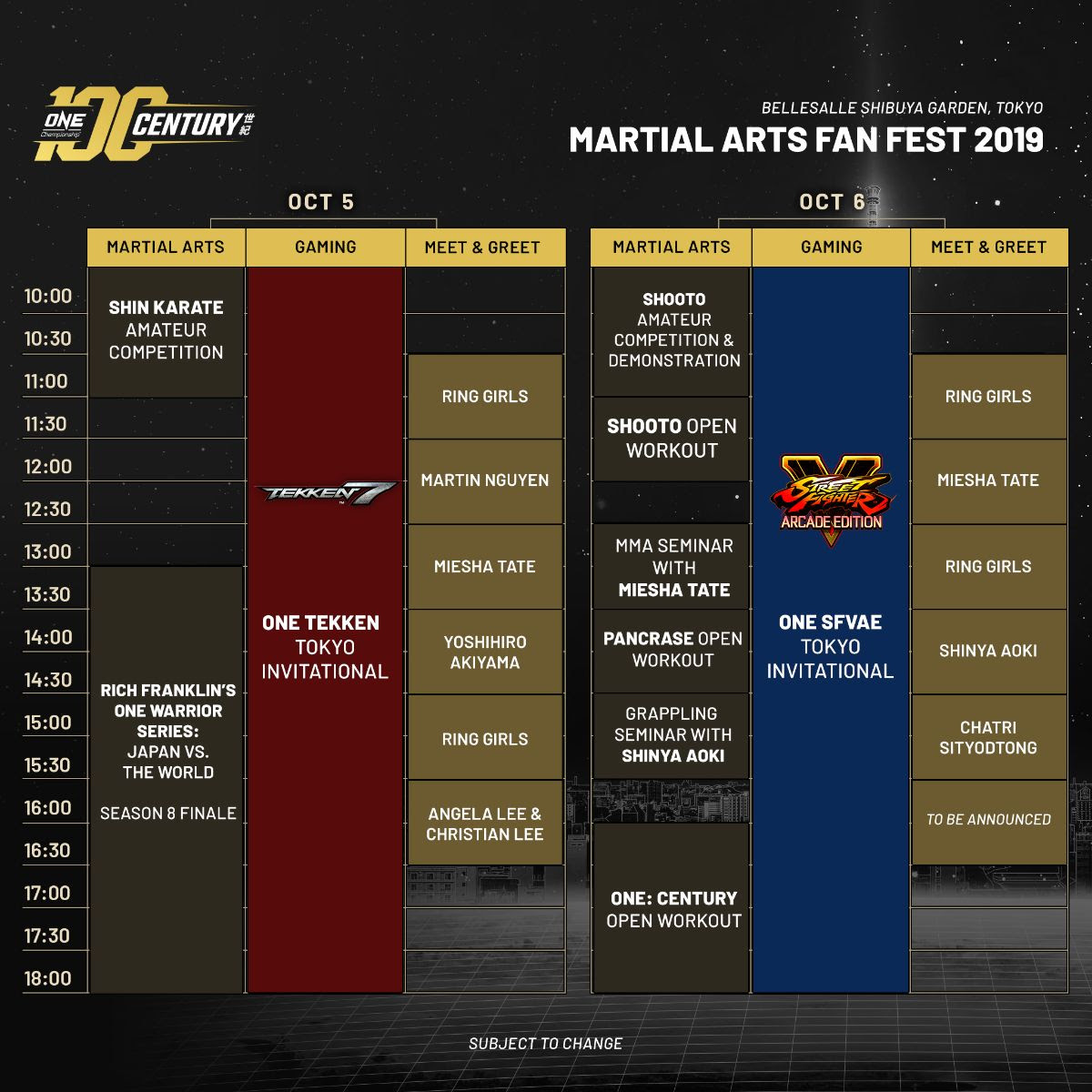 The largest global sports media property in Asian history, ONE Championship™ (ONE), has just announced the official schedule for the inaugural ONE Martial Arts Fan Fest which is set to take place from 5-6 October at the Bellesalle Shibuya Garden in Tokyo.

The ONE Martial Arts Fan Fest aims to bring the martial arts and esports communities together in an exciting two-day event. The world’s top martial arts athletes and fighting game esports players are invited to participate in a series of fun and engaging activities.

The event features ONE athlete open workouts and seminars, esports tournaments, as well as a special edition of Rich Franklin’s ONE Warrior Series: Japan vs. the World which will see one athlete earn a USD $100,000 contract with ONE Championship.

Select fans will receive the opportunity to participate in Autograph and Meet-and-Greet sessions with ONE Championship CEO Chatri Sityodtong, as well as their favorite ONE Championship athletes and ring girls. There will also be special martial arts demonstrations from organizations Shin Karate, Shooto, and Pancrase.

On the competitive esports spectrum, ONE Esports has partnered with Bandai Namco and Capcom to hold the ONE TEKKEN Tokyo Invitational and the ONE Street Fighter Tokyo Challenge respectively. Members of the fighting game community can sign up to play alongside the best fighting game esports players in the world, including 2019 EVO Championship Street Fighter V: Arcade Edition winner Masato “Bonchan” Takahashi.

Proudly supported by AbemaTV, Japan’s largest digital television network, the ONE Martial Arts Fan Fest will be held to commemorate ONE’s historic 100th live event, ONE: CENTURY 世紀, that is happening at the Ryogoku Kokugikan on Sunday, 13 October. Also, limited edition merchandise will be on sale.

More details and the latest information about the ONE Martial Arts Fan Fest can be found at onefc.com/fanfest.