The Boxing world has been hit with another shocking news as Super-welterweight Patrick Day dies after getting knocked out inside the ring last Saturday in his fight against Charles Conwell in Chicago.

Day, 27, succumbed to the traumatic brain injury in his fight against Conwell according to his promoter Lou Di Bella who is also the owner of DiBella Entertainment. Day fought in the super-welterweight division and he was knocked out unconscious in the tenth round. Although he was behind on the judge’s scorecard, he was highly competitive throughout the fight even after getting knocked down in the fourth and the eighth round. But in the tenth round, he fell down on his back with his head slamming the canvas after Conwell landed a clean left hook and then the referee waved off the fight. 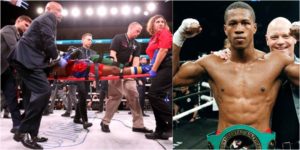 “On behalf of Patrick’s family, team, and those closest to him, we are grateful for the prayers, expressions of support and outpouring of love for Pat that have been so obvious since his injury,” DiBella said in a statement. “He was a son, brother, and good friend to many. Pat’s kindness, positivity, and generosity of spirit made a lasting impression with everyone he met.”

Day made his professional debut back in 2013 and had compiled a professional record of 17-4 and had a very decorated amateur career having won the New York Golden Gloves tournament and was twice the national champion. As a professional, he won the WBC continental Americas super-welterweight championship in 2017 by outpointing the undefeated Eric Walker on the undercard of Omar Figueroa vs Robert Guerrero.

Please PRAY for Patrick Day !!
He got knocked out in his fight against Charles Cornwall and is still unconscious from that KO. He was taken to the ICU and was having seizures#UFCTampa #Boxing pic.twitter.com/3zMxfB6fgb

Conwell wrote a lengthy Twitter post, where he said that he didn’t mean for all of this to happen.

“All I wanted to do was win. If I could take it all back, I would,” Conwell wrote. “No one deserves this to happen to them. I replay the fight over and over in my head thinking what if this never happened and why did it happen to you.”

This is the fourth time in three months, that a boxer has died following knockout losses. Before this Maxim Dadashev, Hugo Santillan, Boris Stanchov had also passed away.