Read Paul Felder’s hilarious Twitter interaction with fan who asked him to focus on commentary! 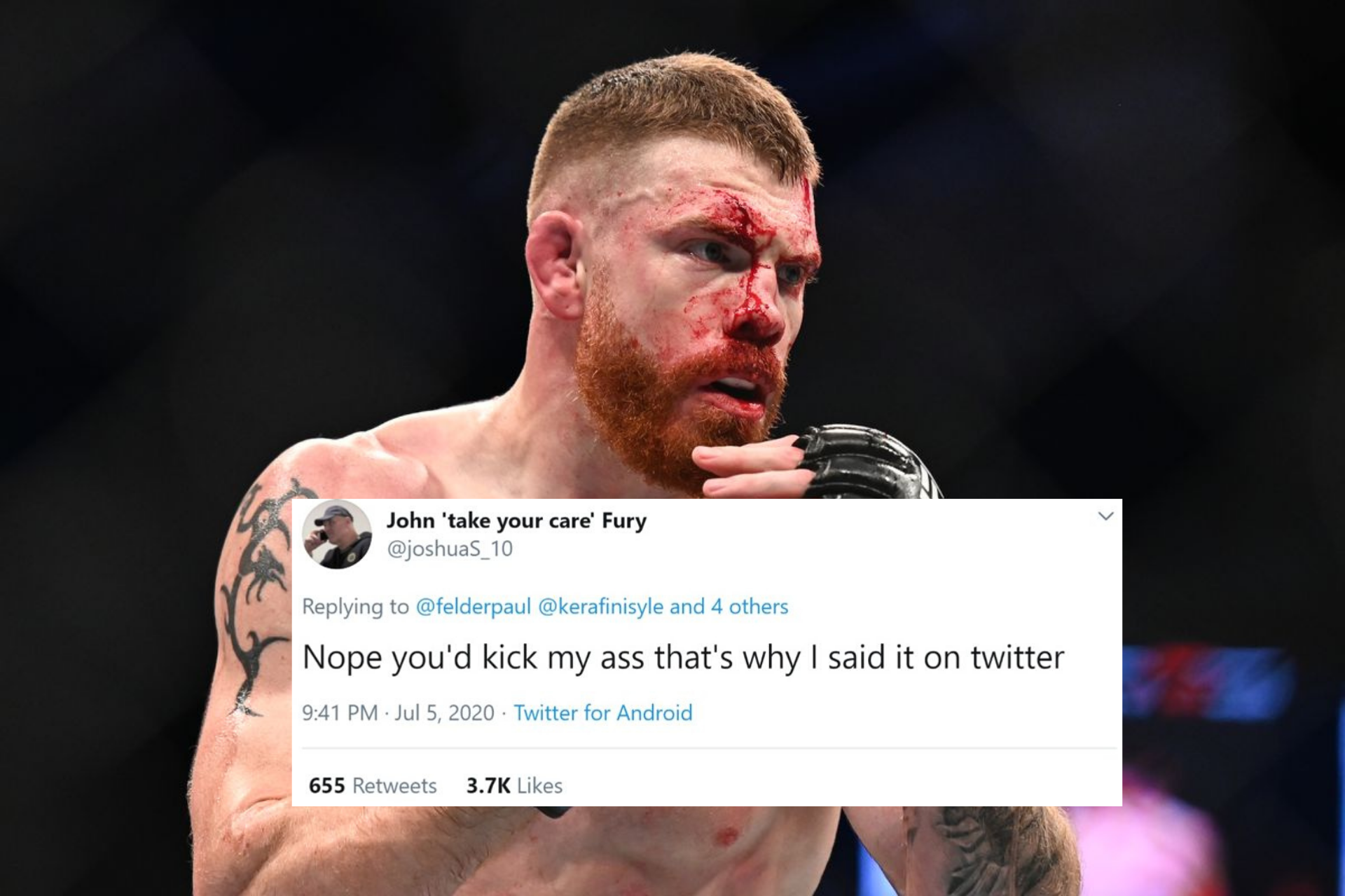 A hilarious twitter back and forth between UFC lightweight Paul Felder and a twitter user @joshuaS_10 has been making rounds on social media.

Paul Felder is coming off of a tough split decision loss to Dan Hooker last February. The fight was an extremely close one and following the loss, Felder took off his gloves and told post-fight octagon interviewer Greg Hardy ‘this might be it for me’, insinuating retirement.

However, following the event, Felder insisted that he isn’t retiring from fighting just yet. Although he is ranked #7 in the UFC lightweight rankings, twitter user @joshuaS_10 told Paul Felder that he should retire as he is much better commentator than he is a fighter.

This reply from the fan didn’t sit well with Felder and he fired a question.

Stay retired Paul you're a better commentator than fighter

Does it make you feel good saying that? Now would you say that to my face man to man?

“Does it make you feel good saying that? Now would you say that to my face man to man?” Felder responded to the fan on Twitter.

The fan, however, was brutally honest with his response.

“Nope you’d kick my ass that’s why I said it on twitter,” the fan responded.

Paul Felder seemed to have appreciated the honest response from the fan and acknowledged it.

Training camp has taken a toll on Paul Felder

In an interview with MMA Junkie earlier this month, Paul Felder revealed that the training camps have taken a toll on him mentally and physically and he wanted to take some time off.

Not retired @FelderPaul is "benching" himself for the right fight, which would include a rematch with @DanTheHangman.@MikeBohnMMA's interview: https://t.co/EsV5cpiG3o pic.twitter.com/MbNdA82vWj

“I’m benching myself for a second. I think that’s the way I would really consider it. Yeah, just needed a little break, man. That fight in New Zealand was a tough one.

“I pour my soul into these fight camps, you know? I really don’t hold back. It’s not like I casually take the fights cuz I’m like ‘Oh yeah! I think I can beat that guy. How many weeks do we have?’ “

“I really try to make sure that I check all the boxes. And i did it for that one [fight with Dan Hooker] and it was so close. And then your heart gets broken with the decision… I’m not crying about it. I needed time. That was a lot.”

The fight between Hooker and Felder was extremely close and the decision could have gone either way. Paul Felder made it clear that he has no problem in running it back against Dan Hooker inside the cage.

“Let’s run it back. I have never really sat and whined and complained about the decision. But it was close enough. You can warrant a rematch between us. And things like that excite me. It’s same as the Edson [Barboza] rematch in my career.

“When these guys beat you and you get the chance to go in there and take one back. I mean, that’s exciting stuff. I think that’s possibly a main event in the future”