Paulo Costa says he wants to fight Chris Weidman to avenge all the Brazilian fighters he beat. 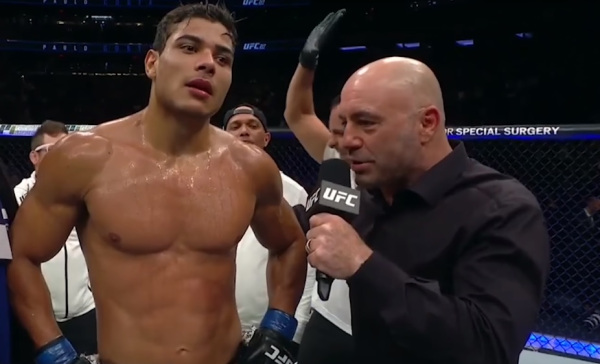 Paulo Costa, who is coming off a big win over Uriah Hall has yet again called out the former UFC Middleweight Champion Chris Weidman. Speaking to Ariel Helwani on his MMA Show on ESPN, Paulo stated that he desires to avenge Weidman for all the Brazilians he defeated.

Weidman, who defeated Kevin Gastelum before his home crowd in Long Island, New York has not fought in a year due to a hand injury after the fight. He has defeated a long list of top Brazilian fighters like Demian Maia, Anderson Silva (twice), Lyoto Machida & Vitor Belfort. His undefeated winning streak was finally stopped by the former Strikeforce Middleweight champion Luke Rockhold in UFC 194.

Paulo Costa tells @arielhelwani he wants to fight Chris Weidman to get revenge for all the Brazilian fighters Weidman has beat over the years (Silva, Machida, Belfort etc.)https://t.co/oh11yyPKZy

Paulo Costa is an undefeated Brazilian mixed martial artist currently competing in the Middleweight division of the Ultimate Fighting Championship, he made his professional MMA debut in his native country of Brazil in February 2012. He has never been past the second round while under the UFC banner.

Previous articleChris Weidman vs. Luke Rockhold 2 in the works for UFC 230 in NYC
Next articlePhotos : The Jessica Penne Story