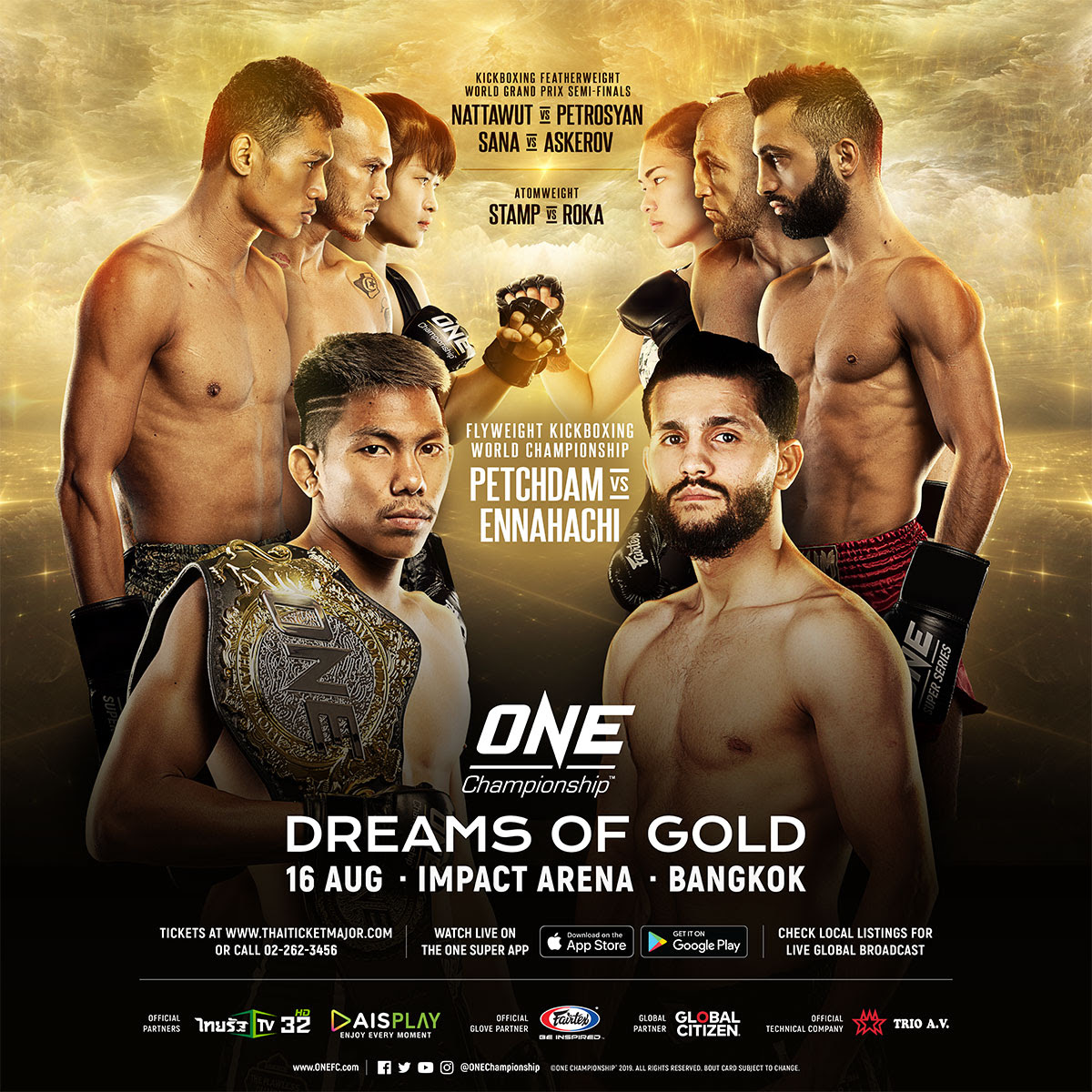 The largest global sports media property in Asian history, ONE Championship™ (ONE), has just announced the initial bouts for ONE: DREAMS OF GOLD, set for the Impact Arena in Bangkok on Friday, 16 August. In the main event, reigning ONE Flyweight Kickboxing World Champion Petchdam Petchyindee Academy of Thailand will defend his title against Ilias Ennahachi of The Netherlands.

After winning the ONE Flyweight Kickboxing World Championship in his last bout, Thailand’s very own Petchdam Petchyindee Academy is ready to make the first defense of his title against Dutch-Moroccan kickboxer Ilias Ennahachi.

Petchdam is a multiple-time Muay Thai World Champion known for his devastating left kick, which is responsible for the majority of his wins. He trains out of the famed Petchyindee Academy in Bangkok alongside fellow Muay Thai World Champions Petchmorakot and Sorgraw. Over the course of his stellar career, the Thai hero has claimed several prestigious accolades, including Lumpinee Stadium and WBC World Muay Thai Championships, as well as a Toyota Marathon Tournament Title. Last May, Petchdam captured the ONE Flyweight Kickboxing World Title with a comprehensive performance against Elias Mahmoudi.

Now Petchdam makes the first defense of his title against ONE Super Series newcomer, Ilias Ennahachi.

Considered one of the top kickboxers in the world, Ennahachi is one of the fastest rising talents in the sport. At just 23 years of age, Ennahachi is already a 6-time Kickboxing World Champion and is now looking to compete against the world’s best in ONE Super Series. With a professional kickboxing record of 34-3-0, Ennahachi’s first assignment is no easy task, as he takes on the champion himself, Petchdam in the main event of ONE: DREAMS OF GOLD.

Italian-Armenian kickboxing superstar Giorgio “The Doctor” Petrosyan advanced to the semi-final round of the highly-acclaimed ONE Featherweight Kickboxing World Grand Prix with a victory over Petchmorakot Petchyindee Academy earlier this July. In his next bout, Petrosyan takes on fellow semi-finalist “Smokin’” Jo Nattawut of Thailand.

A multiple-time Kickboxing World Champion, Petrosyan is one of the greatest and most dominant kickboxers of all time, having already accomplished an incredible amount in his sensational career. This includes two K-1 World MAX World Championships, a Glory Slam Tournament Championship, and several other prestigious titles. Petrosyan joined ONE Super Series in 2018 and has since put together a solid run through the ranks.

A former two division Lion Fight World Champion and WMC Muay Thai World Champion, Nattawut is one of the finest attacking talents in the striking world. Right from the opening bell, Nattawut is known for igniting the ring with his trademark intensity, and it has led him to sterling success in his career thus far. The winner between Nattawut and Petrosyan advances to the final round of the ONE Featherweight Kickboxing World Grand Prix and gets a chance to compete for the US $1 million prize.

Stamp first made her ONE Championship debut as a participant in Rich Franklin’s ONE Warrior Series, where she knocked out Rashi Shinde in 19 seconds. With dreams of one day becoming a three-sport World Champion, Stamp embarks on a remarkable journey for a mixed martial arts World Title.

Standing in Stamp’s way is Roka, who holds unblemished professional records in both mixed martial arts and boxing. Roka is a former Indian National Boxing Champion with fast and powerful hands. Nicknamed “Knockout Queen”, she has two submissions and two knockouts out of four wins. Making her ONE Championship debut, Roka takes on the talented Stamp Fairtex in what promises to be an exciting matchup.

Sana shocked the world last April when he defeated Muay Thai legend Yodsanklai IWE Fairtex to advance to the tournament semi-finals. Sana was aggressive and assertive, as he put together the performance of a lifetime to score the upset.

Askerov, on the other hand, dominated previous opponent Enriko Kehl to bag a unanimous decision victory and advance in the tournament. Askerov is known for his crisp combinations and thunderous kicks, which he will look to utilize in a high-stakes showdown with Sana. This promises to be an action-packed striking extravaganza that fans will surely not want to miss.

Le burst onto the ONE Championship stage when he stopped dangerous Brazilian Jiu-Jitsu black belt Yusup Saadulaev with a knee last March. With a style that incorporates elements of taekwondo and boxing, Le will put his skills to the test against Boku.

Boku, meanwhile, is no stranger to facing the best talent ONE Championship has to offer, having taken on legends such as Shinya Aoki, Eduard Folayang, and Narantungalag Jadambaa. Boku has tremendous hands and decent grappling, which should prove to be a solid challenge for Le.

Thailand’s “Elbow Zombie” Muangthai PK.Saenchaimuaythaigym will return to the ONE Championship stage when he takes on Kenta Yamada of Japan in a ONE Super Series Muay Thai contest.

Muangthai, who owns a professional Muay Thai record of 198-41-4, was successful in his ONE Championship debut in November of 2018 when he defeated Panicos Yusuf by unanimous decision. Already a 3-time Muay Thai World Champion, the 25-year-old is looking to further his career in the world’s most prestigious all-striking league, ONE Super Series. Yamada, a former WBC Muay Thai Japan Champion, will do his best to derail Muangthai’s progress and boost his own spot in the standings.

Former ONE Strawweight World Champion Alex “Little Rock” Silva of Brazil is on the comeback trail looking to redeem himself following a handful of setbacks. He takes on Indonesian grappling specialist Stefer “The Lion” Rahardian in a strawweight contest.

Silva, a Copa do Mundo World Champion in Brazilian Jiu-Jitsu with over 15 years of experience, has won numerous regional and national titles in Brazil and is a 3rd degree black belt. Rahardian, on the other hand, is the former ONE Jakarta Flyweight Tournament Champion, and one of the finest martial arts talents to emerge from Indonesia. Five of his eight victories have come by submission.

Also seeing action in a series of competitive ONE Super Series Muay Thai bouts are some of the world’s greatest striking talents.

The 34-year-old veteran Saadulaev recently made the move up to featherweight after experiencing mixed success at bantamweight. However, “Maestro” has yet to record a victory since then. He looks to turn things around, this time against Kamikubo, a formidable opponent who is currently riding a six-bout win streak.