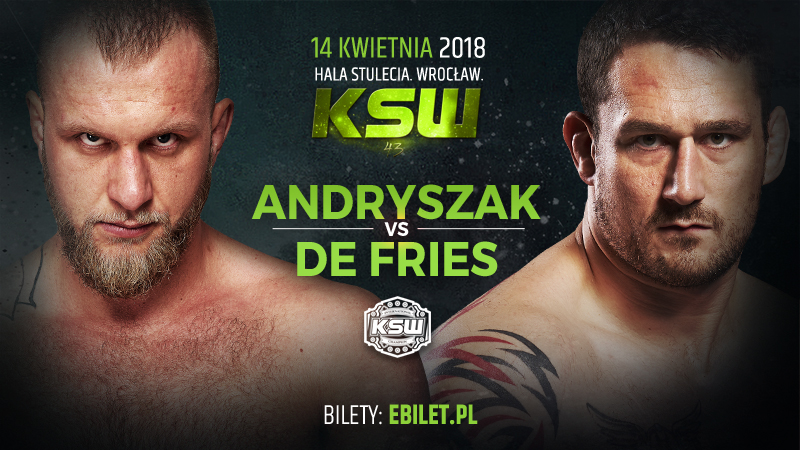 The UK’s Phil De Fries signed with KSW earlier this year following back to back wins over Russian prospect Anton Vyazigin and veteran James Thompson. The 31-year-old has fought all over the world in some of the biggest promotions around including making five appearances in the UFC and has registered twelve stoppage wins. He holds career victories over the likes of Oli Thompson, Brett Rogers, and Rob Broughton. However, he says beating Andryszak and becoming the KSW heavyweight champ would be his biggest accomplishment to date.
“Michal is a very dynamic kickboxer with good jiu jitsu and I’m a wrestling based fighter, so this will make a good match for the fans. I’m very confident I can impose my game on him,” said De Fries. “I would love to bring the belt back home with me, it would be the most prestigious title of my career.”
The man standing in his way though is 25-year-old Michal Andryszak, a fighter with a 100% finishing rate, nineteen first round stoppages, and who is on a six fight win streak. Andryszak returned to KSW last year, after a three year absence from the promotion, and immediately made his mark with a first round anaconda submission over veteran Michal Kita at the historic KSW 39 event. Then this past December he KO’d former champ Fernando Rodrigues Jr. in less than 30 seconds and he doesn’t plan on going the distance in this title fight on April 14 either.
“This is championship bout scheduled for five rounds but I’ve never went the distance and I’m not going to this time either,” stated Andryszak. “Let’s do it. Let’s give the fans a real great fight, Philip!”