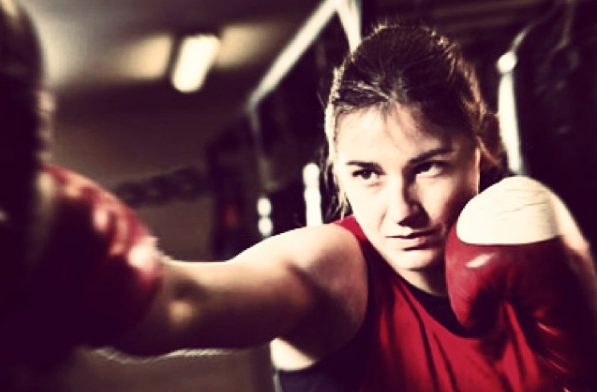 Katie Taylor (born 2 July 1986) is an Irish athlete who has competed in association football and boxing. As a professional boxer she has held the WBA female lightweight title since 2017.

A prodigious amateur boxer, Taylor won five consecutive gold medals at the Women’s World Championships, gold six times at the European Championships, and gold five times at the European Union Championships. Hugely popular in Ireland, she is credited with raising the profile of women’s boxing at home and abroad. Regarded as the outstanding Irish athlete of her generation, she was the flag bearer for Ireland at the 2012 London Olympics opening ceremony before going on to win an Olympic gold medal in the lightweight division. Taylor turned professional in 2016 under Matchroom Boxing, and is known for her fast-paced, aggressive boxing style. 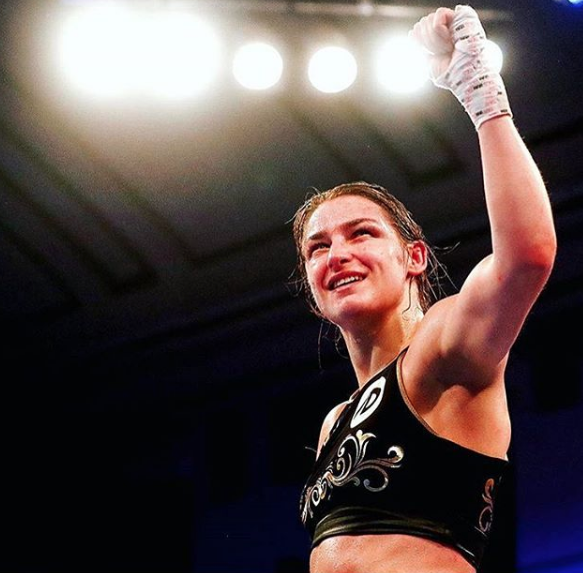 Taylor’s first noteworthy success was at the 2005 European Amateur Championships, in Tønsberg, Norway. She won the gold medal, defeating Eva Wahlström of Finland in the final of the 60 kg lightweight class.

Later in 2005, at the World Amateur Championships in Podolsk, Russia, Taylor advanced to the quarter-finals in the 60 kg weight class. Here she lost against Kang Kum-Hui, who remains the only boxer to have defeated Taylor at the World Championships. 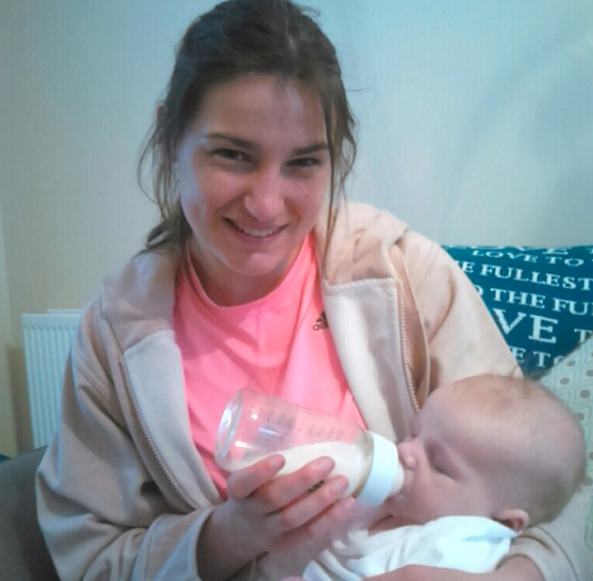 At the 2006 World Women’s Boxing Championship, contested in New Delhi, India, Taylor became Ireland’s first World Champion, defeating Chalaya again in the semi-final and then Erica Farias of Argentina in the 60 kg final. 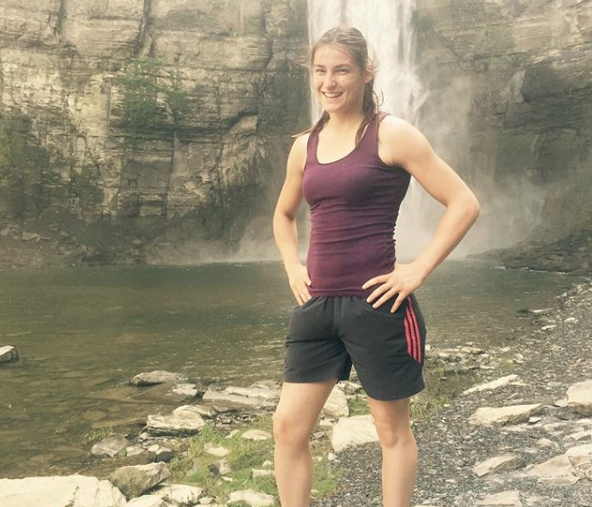 In 2007, she won her third successive European Championship title in Denmark. 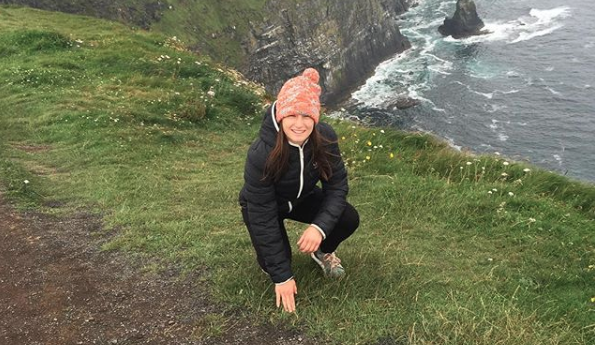 Taylor went on to claim her second World title at the 2008 AIBA Women’s World Boxing Championship, contested in November at Ningbo, China. In the 60 kg weight class, she defeated China’s Cheng Dong in the final match which was her 100th bout.

On 21 March 2009 at The Dublin O2, Taylor won a 27–3 win over three-time Pan-American champion Caroline Barry of the United States on the undercard of a pro WBA super bantamweight world title fight between Bernard Dunne of Ireland and Ricardo Cordoba of Panama. Speaking after the fight, Taylor, who had stopped Barry in the final of the 2006 World Championships in New Delhi, said she was stunned by the welcome she received from Irish boxing fans. She said: “I couldn’t believe the reception I got – it was an amazing experience for me. I knew it was going to be a tough fight and well done to her for never backing off.” 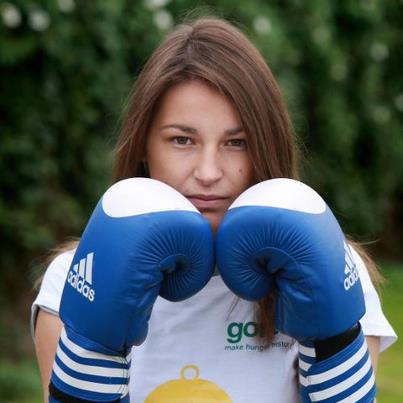 On 18 September 2010, Taylor went on to claim her third successive World title at the 2010 AIBA Women’s World Boxing Championship, in Barbados. In the 60 kg weight class, she again defeated China’s Cheng Dong in the final match. This was Taylor’s 100th career win. 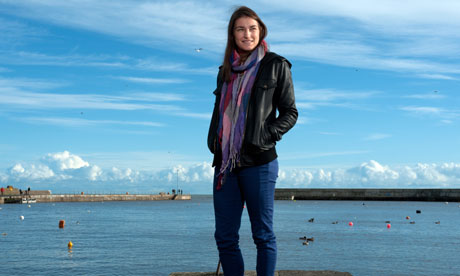 Taylor won the Gold Medal at the EU Women Boxing Championships in Katowice, Poland in 2011.

On 19 May 2012, Taylor won her fourth successive World title at the 2012 AIBA Women’s World Boxing Championship, in Qinhuangdao China. In the 60 kg weight class, she defeated Russian southpaw Sofya Ochigava. 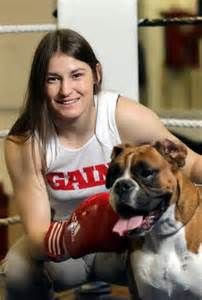 On 24 November 2014, Taylor won her fifth straight lightweight title in South Korea at the 2014 AIBA Women’s World Boxing Championships, defeating Yana Allekseevna of Azerbaijan. The final scoreline was 40-36, 39-37, 39-37 in her favour.

On 27 June 2015, Taylor won the lightweight title in Azerbaijan at the inaugural European Games, defeating Estelle Mosely of France. The final scoreline was 36-40 36-40 37-39 in her favour. 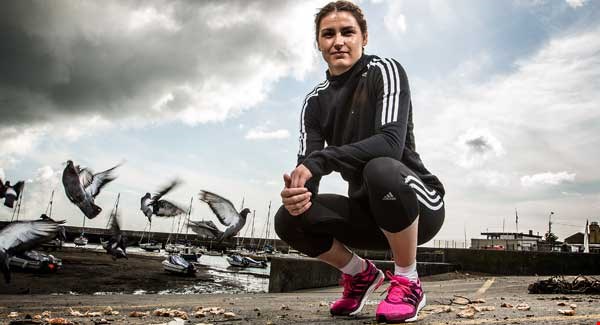 On 24 May 2016, Taylor qualified for the 2016 Summer Olympics after defeating Victoria Torres in the quarter-finals of the lightweight division at the 2016 AIBA Women’s World Boxing Championships. Two days later, Taylor lost to Estelle Mossely in the semi-finals which ended her quest for a sixth World title in a row. 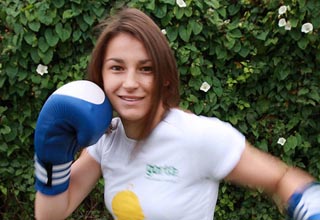 Taylor made her professional debut on 26 November 2016, at Wembley Arena in London, stopping Karina Kopinska in three rounds. On 28 October 2017, Taylor won her first professional world title, the vacant WBA female lightweight title after defeating Anahi Sanchez at the Principality Stadium. On 13 December 2017, Taylor retained her lightweight world title after a defeating Jessica McCaskill in a ten-round contest at York Hall

Previous articleWWE: Roman Reigns reveals who he wants to have a match with at WrestleMania
Next articleUFC: Junior Dos Santos accepts six month suspension from USADA