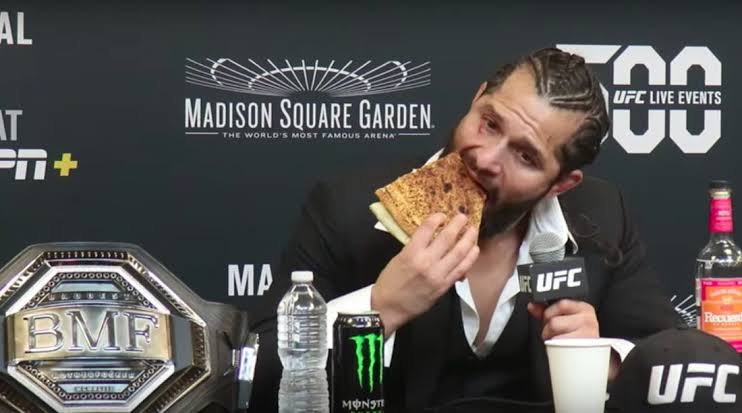 Miami’s own and #3 ranked Jorge ‘Gamebred’ Masvidal defeated fan favorite Nate Diaz via third round doctor stoppage to clinch the BMF title wrapped around his waist by none other than Dwayne ‘The Rock’ Johnson.

Diaz did suffer two huge cuts around his eye however the doctor stoppage, considering the magnitude of the fight, did made the end anticlimactic. Especially keeping in mind the stylistic aspect as Diaz, known for his extreme cardio was expected to pick up from fourth round and had a vague chance to win despite being behind on scorecards. 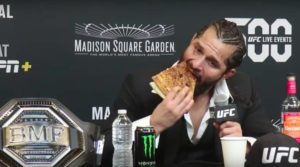 The fight as anticlimactic as it was, the MMA community had their eyes on Masvidal’s post-fight interview. With a gazillion of questions about a plethora of aspects about to being bombarded at him, Masvidal showed up to the conference in a rather chill way. Not your forget him being a foodie, Masvidal answered the entire conference chugging some pizza and a glass if beer. (via YouTube):

Masvidal addressed various topics as to how he felt about the fight, the doctor stoppage, his game plan, accusations of him slowing down. Going forward, Masvidal weighed on a potential opponent, former double champ Conor McGregor, him possibly to be named the ‘Fighter of the year’, his future plans and much more.

Previous articleJorge Masvidal calls out ‘f***ing midget’ Conor McGregor for a fight
Next articleUFC: Kelvin Gastelum offers no excuses and apologises for UFC 244 performance against Darren Till