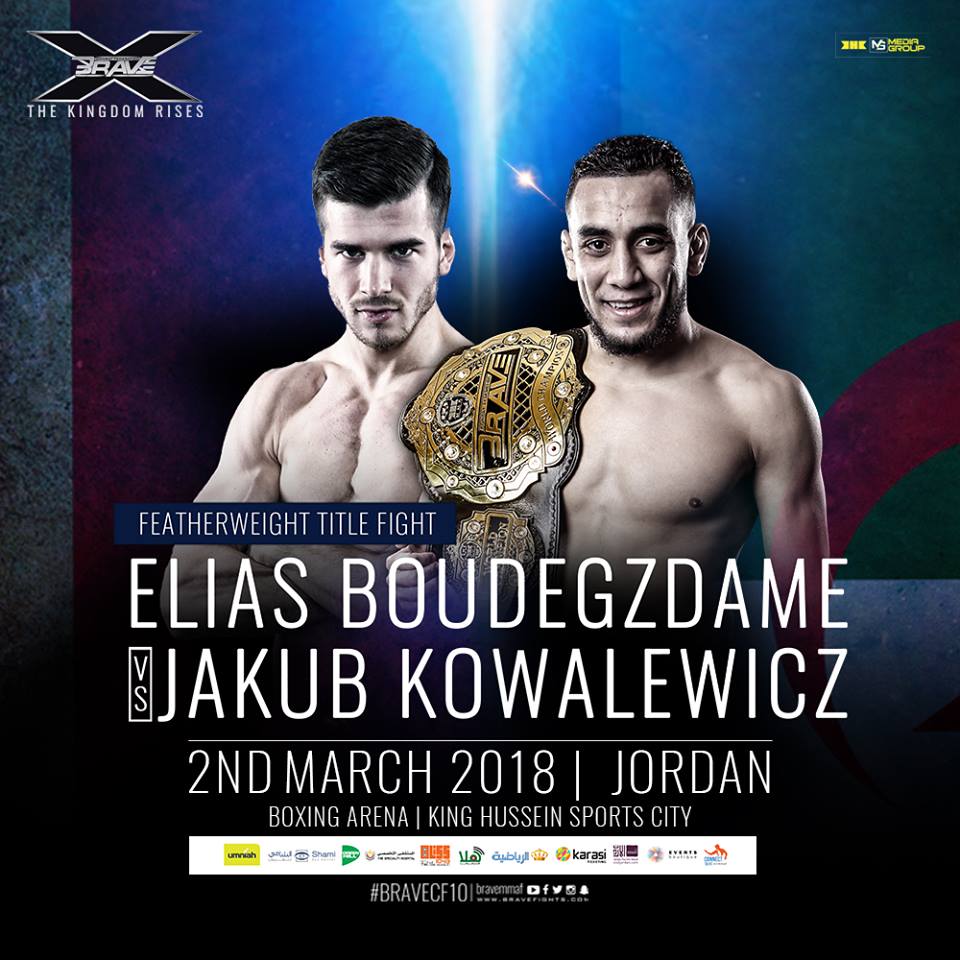 Brave 10: The Kingdom Rises will mark the first time a Brave world champion will defend his title as Featherweight king Elias Boudegzdame faces challenger Jakub Kowalewicz. The event, set for Amman, Jordan, on March 2nd, will settle a dispute between two of the promotion’s most prized young fighters. Both Boudegzdame and Kowalewicz have proved to be world-class prospects with their promotional appearances.
Jakub is riding a three-fight win streak, having won his Brave debut against a tough Alex “Leko” Coelho at Brave 5: Go For Glory, while “Smile” was victorious against Masio Fullen at Brave 4: Unstoppable to claim the first-ever Brave world title, and has beaten his last five opponents, with all wins coming via stoppage (four submissions and one technical knockout).
And Brave president Mohammed Shahid is excited to see how the duel between the Polish striker and French-Algerian submission machine will unfold.
“The bout will be an exciting showdown between a submission machine and a pure striker who has never been knocked out in his professional career. This will give the fans in Jordan a chess game that they have never witnessed before”, says Shahid, who feels the match-up could prove to be a make or break for both fighters.
“Jakub will be returning to the cage after a long break and this fight is crucial for his career. Both fighters are young and have a long road ahead of them in mixed martial arts. This fight will definitely be a milestone for both fighters, especially for the winner”.
Brave 10: The Kingdom Rises marks the promotion’s first show in Jordan, home to some of Brave’s most decorated fighters, and the seventh country to host a Brave Combat Federation event, after Bahrain, Brazil, the United Arab Emirates, India, Kazakhstan, and Mexico.
Brave 10 Full Fight Card:
Featherweight title bout: Jakub Kowalewicz (Poland) vs Elias “Smile” Boudegzdame (Algeria)
Welterweight bout: Jarrah Al Selawe (Jordan) vs David Bear (France)
Lightweight bout: Charlie Leary (UK) vs “The Pride of Palestine” Abdul Kareem Al Selwady (Jordan)
Welterweight bout: Mohammad “The Latest” Fakhreddine (Lebanon) vs Tahar “Fast Hands” Hadbi (France)
Welterweight bout: Pawel Kielek (Poland) vs Tyler Hill (USA)
Bantamweight bout: Felipe Efrain (Brazil) vs Frans Mlambo (Ireland)
Featherweight bout: Dylan “The Nuke” Tuke (Ireland) vs Sodiq “Super” Yusuff (USA)
Bantamweight bout: Jalal Al Daaja (Jordan) vs Crisanto Pitpitunge (Philippines)
Catchweight bout (74kg): Mohammad “The Killer” Ghorabi (Lebanon) vs Gadzhimusa “Deadshot” Gaziev (Russia)
Middleweight bout: Tarek Suleiman (Syria) vs Will Fleury (Ireland)
Bantamweight bout: Nawras “The Honey Badger” Abzakh (Jordan) vs Abdul Hussein (Finland)
Middleweight bout: Chad “Superman” Hanekom (South Africa) vs Ikram Aliskerov (Russia)